I once picked up a book in a bargain bin in the mid to late eighties, which I'd like to find again.

The story starts with a twin baby being stolen by evil creatures. A particular detail that sticks with me is that they fed him the breast of his nursemaid and the milk in it got him to like the taste of blood/raw human flesh (obviously paraphrasing here).

It then jumps ahead in time and the twins have grown up, one with the evil beings (demons? monsters?) and the other as a prince. He is highly trained in swordplay and much is made of different named forms (think Rand in Robert Jordan). I'm pretty sure he had an experienced and wise trainer.

The lost brother returns I think and there is where it gets really hazy. I do remember that it must have been the start of a set because it ended on a bit of a cliffhanger I think.

I'm feeling a blue cover, guy with a sword... maybe on an outcrop of rock or battlement? Bad thing approaching?

Well that's my memory of almost 30 years ago! Does anyone know which book or perhaps even series this might be?

Found it trawling through a list of 80s Fantasy novels! It's The Lost Prince by Paul Edwin Zimmer. 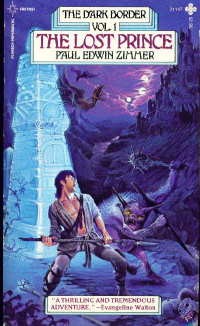 Were it not for the awesome power of the Hasturs, the creatures contained by the dark border would overrun mankind. As humans reeled from the constant onslaught only to rebound, the darkness searched for another path to victory. It stole a princeling and raised him in Shadow, teaching him what no human had ever learned. It taught him how to command the living and the dead, how to usurp his brother's throne through magic, and how to turn the humans against themselves. And then it sent him home...

Paul Edwin Zimmer (1943–1997), the brother of science fiction and fantasy author Marion Zimmer Bradley, was a noted poet and an established author in his own right. He was also an accomplished swordsman who studied both eastern and western schools of the martial art and brought much of this knowledge to the books he wrote.

7
Fantasy series about twin boys from the 80's. One is stolen at birth by evil forces