Looking for a T.V. show - Animation - Boy can change into red and yellow robot with an arm blaster

Don't have any images, but I'll try my best to describe from memory. It's an animated kids show that I used to watch on Netflix. I don't remember the plot, but the main character, if I remember correctly, was a boy who could change into a red and yellow robot with an arm blaster. His helmet looked like a bicycle helmet if that's anything.

Could you be thinking of Eon Kid, the English translation of the Korean cartoon, 아이언 키드 (Iron Kid)? He does have a red-and-yellow suit, a blaster, and the head does look a bit like a bike helmet. And it was available on Netflix until 2013. 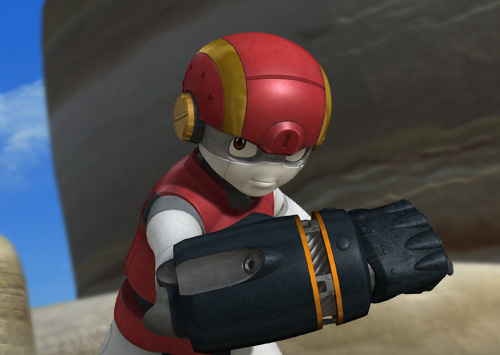 Marty is the lead character of the series. While scavenging for robot parts to sell he finds the Fist of Eon and puts it on, although unwillingly. Marty later discovers that he is a direct descendant of Eon, who 100 years prior to the series start defeated the General and ended the Robot War. Endowed with the power of the fist he must fight the evil forces of the general. He was originally named Iron kid in the original Korean version. Marty is the last descendant of the Eon family and is also the last heir of Eon. He is the final carrier of the Fist. He's shown to possess a natural talent for fighting and grows stronger as the series goes on.

3
3D cartoon where the MC finds a red robotic arm and it gets stuck on his right arm
2
Little boy with robotic gloves attached to one hand. What's the name of the show?

13
Cartoon movie where the main character had a robotic arm
11
Identify an '80s/'90s animated film from a scene
5
80s/90's Robot cartoon, one like a Transformer
6
Post-apocalyptic webcomic. Hero is a former doctor turned android, named something like Abe or Aron
5
Story about 2 kids with magic books
4
Anime: boy transforms into white+orange being after a terrorist attack