What are the limits of Wolverine's immortality? [duplicate]

We all recognize the regenerative capacities of the countless characters from Marvel and DC, and Wolverine is one the first that comes in my mind when speaking of immortality (or "unkillability"?), after Deadpool and many others.

There is already a thread about Deadpool, and although it is also included in X-Men universe, the logic clearly is not the same for both characters. Furthermore, after the events in many X-Men movies - particularly in X-Men Origins or The Wolverine, which in my country is titled "Wolverine: The Immortal" -, we also perceive much more the immortality or semi-immortality after him being shoot in the head or losing part of his members.

I'm a layman when speaking of Marvel comics, but I'm always very curious when it comes to be a subject matter of immortality. For example, what would happen if Wolverine was vertically cut in half? Two wolverine are generated? At least two brains, in ideal conservation ambient, could develop by themselves?

In the real world something similar can happen with non-differentiated stem cells, but I don't know what logic is used when concerning adamantium and tissue regeneration in Marvel universe. I wonder if there are any references that put this topic in evidence in the comics.

First, let's take a look at his healing factor.

The Adamantium is actually toxic, and it actually takes the healing factor down a bit.

It's possible that the reason he ages at all is because of the presence of the metal.

The comics have never been consistent about where his healing factor actually comes from, although the Xavier Protocols, which were all about killing Xmen who got out of hand talked about separating the head from the body.

But with the Adamantium on board, it would be nearly impossible to separate his head from his body, because the metal is so hard.

But we do have some weird canon--at one point Logan is just a head. Like just a head. This is in Ultimate Wolverine Vs. Hulk. It gets weird. 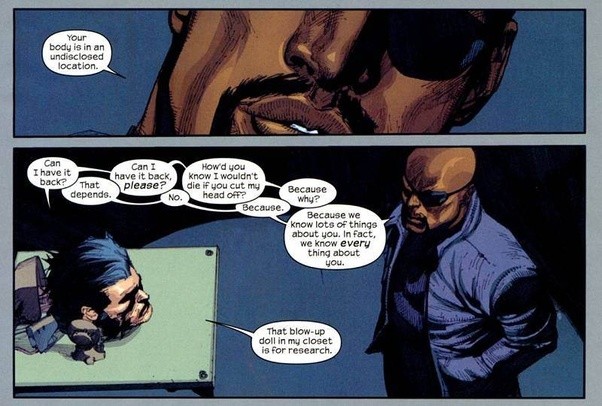 The comics have never been really...consistent about what he can and can't survive and what the source is, whether bone marrow or blood or what.

In theory what you've said could work--but his memories should not be perfect. You'd up with a left brain Wolvie and a right brain Wolvie, with fragmented memories, and an empty hard drive on the other side.

Take a look at this link for a list of some of the most brutal injuries he has survived.

He could likely regrow an entire body, but it would take a lot of time. He's certainly grown bones back in the past, although I think in Earth 295 Age of Apocalypse which was a different reality, he was missing a hand. Weird thing was, I don't think the hand was actually missing. I think that he used it as a pretend handicap--and then surprise, claws would pop out when someone thought they had him on the ropes. It's hard to have the claws without the hand itself, so my thought is he got used to fighting with the cover, and kept it even after it grew back as a kind of last ditch advantage.

I recall him able to regrow limbs, it just takes a long, long time. Mostly he just reattaches something that got cut off. Takes less time without the adamantium in his system.

Not the answer you're looking for? Browse other questions tagged marvel movie x-men-cinematic-universe wolverine or ask your own question.

37
How much of Wolverine has to be left to heal?
42
If you cut Deadpool exactly in half, which half would regenerate?

16
Why doesn't Rogue have super strength and the ability to fly?
20
How can Wolverine stand with so much Adamantium?
2
Are Wolverine's claws shrinking?
12
When/How did Wolverine learn about his past?
18
Is Quicksilver in the X-Men movies the same as in Avengers: Age of Ultron?
4
Is the outcome of X-Men Apocalypse already known thanks to the ending of X-Men: Days of Future Past?
7
What is Wolverine's immigration status in the USA?