How fast is The Flash when he's outside the Speed Force?

Obviously The Flash is known to be faster than light but I was just reading another source that compares him with The Silver Surfer who happens to be exactly 99% faster than light. this source gave the victory to The Silver Surfer because supposedly he is able to surpass the speed of light on his own without any special assistants while Flash in the other hand needs to be inside the Speed Force to reach this speed.

Now this is where my confusion comes in. I really thought The Flash was faster than light on his own while the Speed Force just gives him a little extra boost. He also beat his Marvel counterpart Quicksilver in a DC/Marvel crossover where Marvel characters somehow end up in the DC universe, I believe in this crossover he was able to beat Quicksilver by using the Speed Force. However in another Crossover where the DC characters end up in the Marvel universe Quicksilver was able to get the victory for the fact that The Flash cant use the Speed Force in the Marvel universe.

So anyways exactly how fast is The Flash when he's not in the Speed Force?

This has been shown in the Arrowverse TV series, as well as in the numerous DC/Marvel crossovers (as you indicated in the question) and in DC comics as well.

The Speed Force gives a speedster his speed. It is always present in their bodies, and they can tap into it at will. It allows them to hyperaccelerate their senses and thought processes, as well as their bodies, and it permits them to move at superhuman (and super-sonic, and occasionally super-luminal) speeds.

If a Speed Force Speedster is cut off from the Speed Force, they lose all associated abilities (including their accelerated metabolism and healing). This has been seen in DC comics, as well as the current TV series.

In the crossovers you mention, Flash was able to easily defeat Quicksilver because Flash had access to the Speed Force, and could move at speeds that made Quicksilver (who has trouble breaking the speed of sound) look like he was standing still.

When cut off from the Speed Force (because they were in Marvel, which lacks it), he was just a normal human being in a silly costume. Of course, this couldn't stand. I believe in the mentioned crossover, they returned to the DC Universe for a time and constructed a Speed Force Battery or something similar that let Flash store some of the Speed Force and bring it with him, giving him limited ability to access his full powers.

No, it didn't make sense then, either.

In short: Without access to the Speed Force, the Flash (and similar speedsters) are no longer speedsters at all. 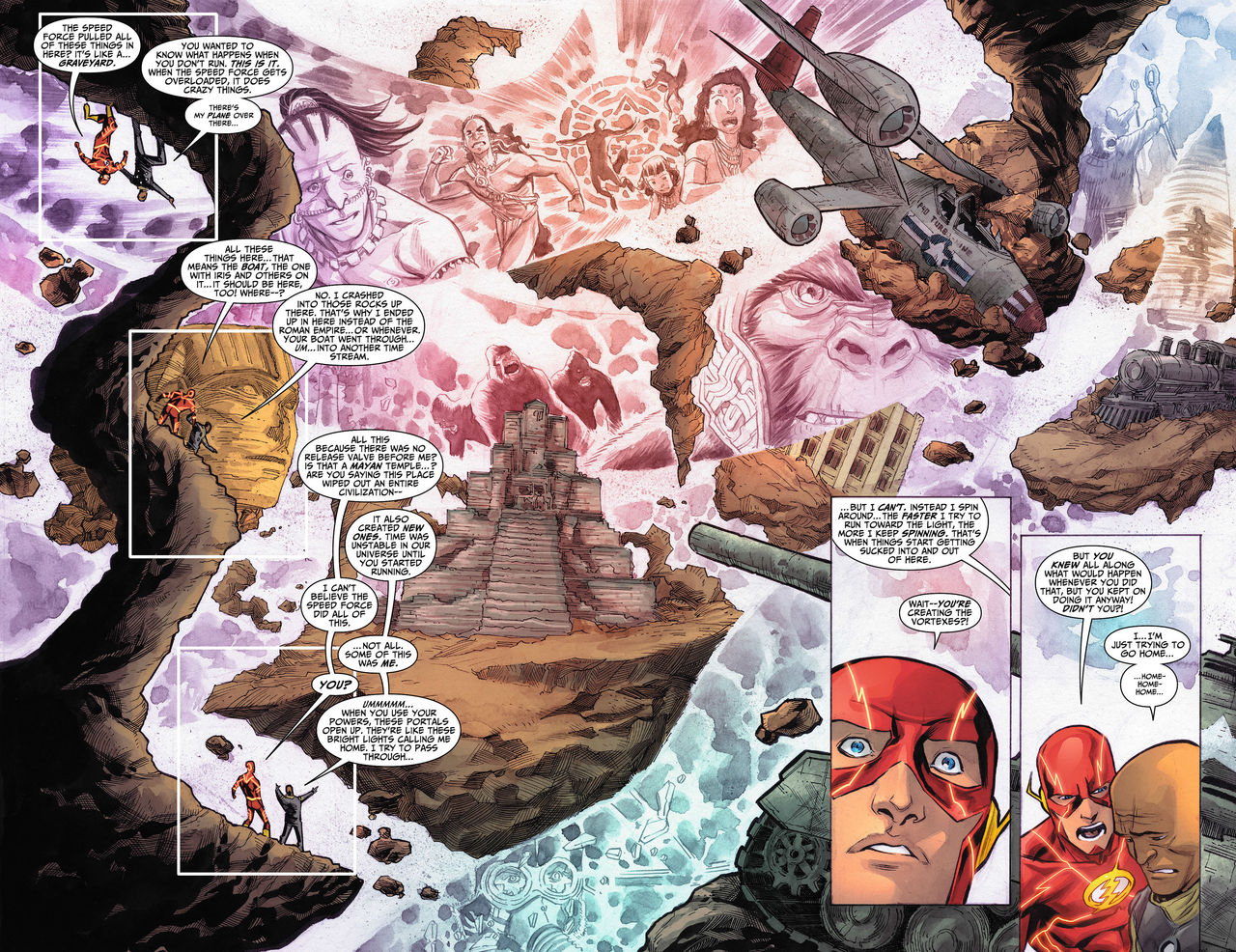 One does not have to utilize the Speed Force to have superspeed. But the benefit of having the Speed Force protects the environment from the effects of a speedsters superhuman capacity and allows speedsters to perform a variety of metahuman feats, often unique to speedsters.

In the Marvel Universe

It had been decided by DC and Marvel that the Speed Force as we have understood it is not available in the Marvel Universe.

In the Marvel Universe, there was, at least for a time, a degree of physical possibility written into the characters capable of moving at superspeed. As such this limited them to a maximum speed equivalent to the speed of sound or a bit faster because their bodies were augmented either through technology or mutation. See: Speed Demon, The Whizzer.

The Official Handbook of the Marvel Universe listed the Speed Demon, a known speedster-style villain listed his capacities as such:

Similar writeups for other speedsters including the Whizzer (a Golden Age speedster) and Quicksilver (a mutant biologically enhanced for speed) existed for the longest time until the Marvel Universe began improving the capacity of their speedsters.

Since then, the limitations on speedsters in the Marvel Universe have fallen away with Marvel's speedsters getting significantly faster than they had ever been but no mention of the Speed Force is referenced, but something like it must exist for speedsters to be able to move at the speed of light in atmosphere and not bursting into flame due to thermonuclear forces.

21
Where to start if I want to get into certain DC comics?
8
What does the Speed Force govern?
6
Can the Flash use his powers and super speed without the Speed Force (e.g. outside the DC universe)?
12
Is Green Lantern faster than Flash and Superman?
2
Can the Flash run fast enough to escape a black hole?
10
First instance in the comics of The Flash's trailing lightning as literal rather than a visual effect?
97
Has an injured Flash ever used super-speed to walk on his hands?
14
Does the Flash have use for a computer/programming and if so how does he deal with their slowness?