I saw it in very young age and probably saw only one or two episodes. I think it was something like 'Are you afraid of the dark' or 'Twilight Zone' only more obscure - i.e. different episodes weren't connected directly.

I remember that in the opening sequence they showed something like a portal from Sliders, only the camera moved to the side and you can see that portal had no thickness.

And I remember that in that one episode there was some teenage guy that looked completely normal but after some time he went into his room, rolled his trouser-leg up and took something from his leg. Like an electric plug. And than he plugged it into a wall (into the socket I presume). So he was like a robot but nobody knew that.

That was in Russia in the mid-90's. Unfortunately I don't remember the channel it was on.

I believe you are looking for the Not Quite Human movies. Adapted from the Not Quite Human book series by Seth McEvoy, it featured Chip, a humanoid robot built by Dr. Jonas Carson and enrolled in the local high school as a test. There were two sequels. All three films were initially shown on The Wonderful World of Disney, which may account for you remembering this as a TV series.

The synopsis from Wikipedia of the first film:

Dr. Jonas Carson (Alan Thicke) creates an android that looks just like a human 17-year-old boy, and he "adopts" him as his son and as an older brother to Becky (Robyn Lively), who names him Chip. After the Carsons move to a new town, Chip (Jay Underwood) is enrolled in high school alongside Becky. Dr. Carson also goes to the high school, having filled a vacancy as a science teacher, which allows him close range to see how Chip interacts with others.

Chip's ways seem to have an annoying or amusing effect on students and teachers, depending on how it is viewed. Chip runs afoul of Coach Duckworth and strict teachers, but his literalist actions surprisingly make him some friends, as other teenagers see it as a way that he is bucking the system. Chip also gains the attention of Erin (Kristy Swanson), a fellow student.

However, Dr. Carson and Chip are being stalked by Gordon Vogel (Joseph Bologna), a former employer who is a defense contractor. A former colleague of Carson's, J.J. Derks, is enlisted to seek out Carson. When asked about Carson's son, Derks says Carson only has a daughter until he remembers that Carson in his younger years had confided in some friends about his idea to make a realistic android, which Derks and the others originally dismissed. Vogel tells Derks they will capture Chip, as Carson had failed to oblige an earlier contract. Since Chip was built with Vogel's resources and while Carson was supposed to honor the contract, Vogel claims he is entitled to ownership of Chip. When Derks questions what Vogel wants with Chip, Vogel replies he intends to reprogram Chip for military purposes. Chip must shake his pursuers while trying to present a "normal" life like a human.

Here is a scene where Chip is nearly caught plugging in:

And a still shot of his ankle: 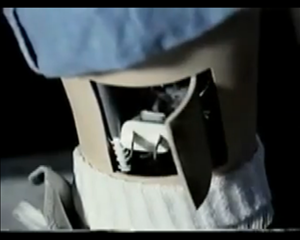 7
Trying to locate a Netflix Kids TV series with alien girl. Show was called “Near Zero”(?)
6
scifi horror movie/episode involving an alien emerging from a dimensional gate
5
TV Episode about woman in an electric chair
1
Help identify Animated Fantasy TV Series
6
Help me identify a 90s/00s live action tv show, space travel, golden object, maybe a saturday morning show?
7
TV show where a stone in a wall in basement is used to open a portal
11
Episode of TV show where nobody was allowed to be smart
18
Old kids show from the 80's about two kids with a magical compass that took them to another world