As of Season 7 Episode 2 of Game of Thrones, it seems we haven't seen Ghost since

Jon was brought back to life at Castle Black

He also wasn't there for

the Battle of the Bastards

either. So where is he?

Brian Cogman, who is one of the show's main writers (especially the writer of that particular episode) and co-executive producer mentioned on Twitter that:

FYI... We shot a Jon/Ghost scene. Didn't make it in. I tried! Thx for watching, everybody. #Stormborn 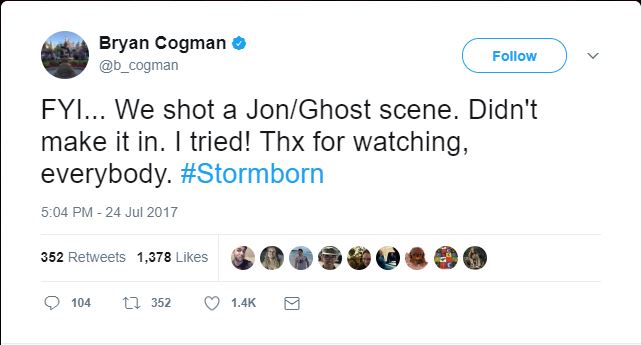 He goes on to further say:

He's at Winterfell. The scene was a brief goodbye beat.

So that means that the good news is: once the DVD/Blu-Ray versions come out, we'll see that cut scene and hopefully get a better idea of where exactly Ghost is.

In Universe, we do not know where Ghost is currently. The actor who plays Davos theorised that the battle is not a safe place for Ghost, and so that's why he isn't included in the Battle of the Bastards.

Yeah that would have been cool, [but] obviously a big battle like that is no place for a direwolf,” he said. “They’re not gonna last very long – I mean look at what happened to Wun Wun, the last of the giants.”

I would assume that Ghost is with Jon (just off screen) but it's definitely possible that he is off hunting, or still at Castle Black.

Obviously, this does not jive with book passages or previous scenes showing various direwolves in battle.

Out of Universe, the director explained that Ghost was cut from that battle for budgetary reasons, the same reason that all of the direwolves' roles have diminished as the series has gone along.

"[Ghost] was in there in spades originally, but it's also an incredibly time consuming and expensive character to bring to life," Sapochnik told Business Insider. "Ultimately we had to choose between Wun-Wun and the direwolf, so the dog bit the dust."

Interestingly enough, it seems that Direwolves may be more expensive to create then the Dragons (which also haven't made much of an appearance yet this season).

Though the series showed a lot of the wolves in season one, their appearances have been noticeably rare in later seasons, with two being brought back in season six only to be unceremoniously killed off.

That’s no accident. Game of Thrones has found that now that the direwolves are big enough that they have to be CGI creations, they’re very expensive and difficult to animate. (They seem to have been much more challenging than the dragons, perhaps because it’s more difficult to convincingly animate an animal that we expect to look and move like a real wolf.)

Out of Universe, this would continue to hold true for future episodes. It's simply too expensive for them to film Ghost walking next to Jon as he goes about his daily routine.

6
How many direwolves remain now at the end of Season 6?

5
What happened to Craster's wives in Game of Thrones?
16
Why did Jon Snow go to this place in Season 5 (Ep 09)?
11
Why is Ghost absent from this fight? Where is he?
39
Why are there two characters named Aegon?
29
Is Samwell Tarly a deserter of the Night's Watch?
8
Who died in the battle against the army of the dead in Season 7 Episode 6?
11
Why did the dragon refuse to cross the Wall in Fire & Blood?
5
Where did Drogon fly off to?
14
What is Jon apologising for?
12
Why does the Night King look different than his cave paintings depiction?