In the movie Thor, why are there several scenes where they ride horses?

In the scene where Thor and the Warriors Four are surrounded by Frost Giants, Odin takes the Bifrost to J├Čtunheim on horseback, which honestly seems like a pointless hindrance to Odin against an attack by Frost Giants. I understand that the commander on a battlefield in old days would prefer horseback to quickly move about and get a good vantage point, but he is Odin. I am sure that he had some quicker means to get to the Bifrost on time than on horseback.

Why with the incredible magic and extremely advanced technology of the Asgardians would they choose a method of transportation as primitive and slow as horseback? 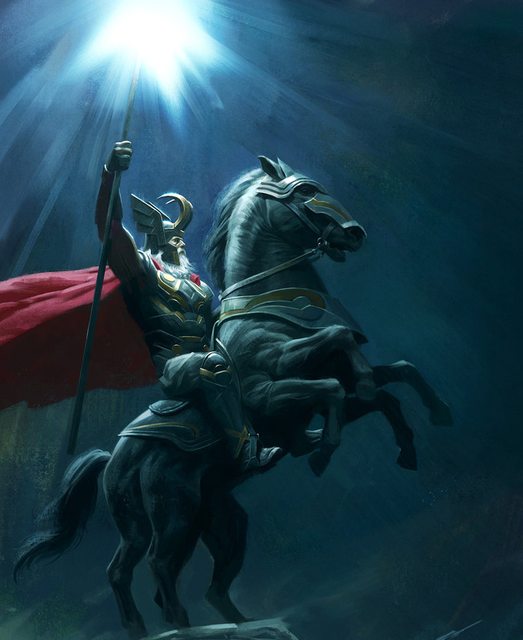 Looking back into Myth:

In Norse mythology, Sleipnir (Old Norse "slippy" or "the slipper") is an eight-legged horse. Sleipnir is Odin's steed, is the child of Loki and Sva├░ilfari, is described as the best of all horses, and is sometimes ridden to the location of Hel. The Prose Edda contains extended information regarding the circumstances of Sleipnir's birth, and details that he is grey in color.

On Marvel Earth #616 - Sleipnir is Odin's magical eight-legged steed, and the is supposed to be the greatest of all horses. As part of a magical bargain, A frost giant was building a wall for Asgard in exchange for the Moon, Sun and the goddess Freya. He had to build the wall in six months using only his grey stallion, Svaldfari. As the giant was nearing his task, the trickster Loki lured the mare off for a sexual liason (thus getting the wall work for free, keeping the Sun and the Moon and Freya from the giant) and getting an eight-legged superhorse in the bargain.

According to the Prose Edda, Loki returned to Asgard and gave the eight-legged gray colt to Odin, telling him that the horse was the swiftest on earth, and could bear Odin over sea, through the air, and to and from the land of the dead. According to Sigrdr├Łfum├Īl in the Poetic Edda, Sleipnir (Earth-616) had runes carved on his teeth.

According to the film's maker, Kenneth Brannagh, his primary reason for wanting to include horses was that it would be an iconic scene, something that's so unusual that it would be instantly memorable to audiences.

Branagh insisted on including something that would both speak to his legacy as one of cinemaŌĆÖs great interpreters of Shakespeare and look memorable: horses.

"It was almost the reason I joined up!ŌĆÖŌĆÖ says Branagh, who makes clear the idea of horses running about in space was ŌĆśŌĆśabsolutelyŌĆÖŌĆÖ his. ŌĆśŌĆśI thought, ŌĆśthis will be the image that either has people laughing us out of the cinema or where you say ŌĆśFuck me! ThatŌĆÖs so distinctive, unusual and original itŌĆÖs why I go to the picturesŌĆÖ. YouŌĆÖll never get that kind of image in another film! That's where weŌĆÖre strong."

"An image that was absolutely central to me wanting to do this film was to have six warriors ride on horses across the rainbow bridge in the middle of space,ŌĆØ Branagh explained. ŌĆ£Seemed to me weirdest, weirdest, most brilliant, thrilling image.ŌĆØ

He also felt that it was wonderfully tongue-in-cheek, making sure that audiences weren't taking the whole thing too seriously.

If you want a movie in which you hope people might be thrilled in the cinema by six warriors galloping on horses across a Rainbow Bridge in the middle of outer space, then you need at other points in the movie that we are celebrating that lovingly but weŌĆÖre not necessarily saying that we absolutely think that thatŌĆÖs occurring even as we speak. But as Jane Foster says with passion and sometimes with humour, magic is just science we donŌĆÖt understand yet. So, humour became essential to do all that.

Not the answer you're looking for? Browse other questions tagged marvel marvel-cinematic-universe thor-2011 or ask your own question.

20
What was the thing revealed at the end of the Thor movie?
24
What are these other relics in the movie Thor?
12
How does Hulk carry both Mjölnir and Thor?
8
Why are the Frost Giants in 'Thor' so short?
5
How tall is Heimdall in the movie 'Thor'?
14
In the Avengers movie, was Thor going to kill Captain America during his woods battle with Iron Man?
12
How does the superpower distribution of Asgardians work?
23
Where does Heimdall's sight come from?
23
Why are there so many Dutch tilts in Thor?