Why didn't the Venom Symbiote turn Peter Parker into a monster like it did with Eddy and Cassady?

I been wondering this since I started watching the Spider-Man cartoons in the '90s.

When the symbiote took over Peter, all it did was mold itself over the Spider-Man suit, thus turning it black while granting an upgrade in its speed and strength, while on the downside altering Peter's mood and personality. However, when Peter gets rid of it, and it then possess Eddie Brock, it totally turned Eddie into a monster with a large tongue and piranha teeth. Once it finds Cletus, on the other hand, it turns him into practically a demonic clone of Venom. This is where my confusion comes in.

Why did it not turn Peter into a monster like them?

Was this because maybe Eddie Brock's personality was different than Peter's? I mean by default Peter Parker was always a typical good guy, so maybe the symbiote's evilness did not have full effect on him. Meanwhile, Eddie Brock was a smart-ass, conniving thug, making him somewhat evil. The symbiote must have made him even more evil and gave him that evil long tongue piranha teeth.

Lastly, since Cletus Kasady was a psychotic, homicidal lunatic, was that the reason the symbiote turns him into a more demonic incarnation of Venom?

Because it depends on the host's emotions. It's clear form the Venom dialogue itself from the show:

Spider-Man: You don't understand, Brock! It doesn't just bond with you, it takes over! Makes you do what it wants! You've got to separate from it!

Venom: Separate?! We're made for each other! Brock's rage and vengefulness made us a perfect breeding ground - far better than you, Parker!

None of the other answers seem to explicitly touch on the appearance. I can offer my interpretation:

The Symbiotes, as mentioned above, attempt to offer a symbiotic relationship before manipulating their host to for their purposes. Part of this, I believe, is that they attempt to reflect the wishes and desired identity of the host.

Peter just wished to be a better version of himself, so the Symbiote did just that: Made him stronger and faster but still look like the Spider-Man he wants to be.

Eddie Brock on the other hand, wants to to look impressive and intimidating. As a large and powerful man (disregarding Topher Grace's take in Spider-Man 3) who obviously spent a lot of time at the gym to both look and be strong the symbiote just further enhanced that. Eddie had more of a desire to look massive and scary and the Symbiote obliged.

Cleetus Cassidy is and wants to be a nightmare, so his Symbiote further further visualized his unstable and frightening mind.

The symbiote has a very specific approach to take over the host.

Ultimately, it is a parasite. It pretends to be a symbiotic (i.e. mutually beneficial) relationship, to further its goal of consuming the host. Although I do think that for the symbiote, its goal is more to have the host consumed by anger, rather than the symbiote literally consuming (i.e. eating) the host.

First, the symbiote gives you what you want. Brock felt powerless to improve his life, so therefore the symbiote gave him the means to be powerful.
Peter, while already trying to be a hero, feels like he's not good enough (this may be a consequence of having grown up as an undervalued nerd). The symbiote enhanced Peter's existing abilities, so that he felt more capable of being a hero.

The goal is the same: Brock and Peter accept the symbiote, because it makes them better.

Secondly, over time, the symbiote subtly alters the host's behavior. In both cases, it presented as increased aggression.

Peter is a good guy. The symbiote can't change him over night. Not only that, Peter is also self-aware enough that he starts realizing something is wrong.
The same is not true for Brock. First of all, he enjoys the aggression, as it is in line with his own character even before he met the symbiote.

The main difference between Brock and Peter is that Brock willingly succumbs to the anger and aggression that the symbiote introduces (or exacerbates), whereas Peter is driven by his principles and therefore objects to the increased aggression.

As a direct answer to your question:

Why did it not turn Peter into these same monsters?

It did. It just happened much more slowly, because Peter is innately a good person, whereas Brock is not (I can't speak to Cassidy).

Not only did it happen more slowly, but Peter willingly rejected the symbiote when it proved to be a danger, whereas Brock embraced it fully even when told about the dangers.

If the symbiote tried to change Peter as fast as it did Brock, then Peter would have immediately protested and rejected the symbiote. It needed to be subtle, and therefore took its time.

TL;DR
The symbiote is a con man. First he gets his foot in the door, makes you trust him, and then it silently siphons away everything you have.
The smarter (in this case: morally good) you are, the longer it takes for the con man to convince you that he's not after your money.

There's one very big difference between Peter's relationship with the symbiote, and just about every other symbiote relationship we've seen:

Peter didn't know he was bonding with a symbiote - he just thought it was a costume.

To the best of my recollection, no other symbiote/host relationship was unknown to the host. Venom's various hosts, Carnage/Kasady, the various symbiote squads we've seen, the symbiotes that bonded with the time-displaced original X-Men in the Venom/X-Men Blue crossover - none of those have the hosts being linked to a symbiote unknowingly.

While Peter knew the symbiote could change form (for instance, it could mimic regular clothing), I think he would have noticed if he started being bulkier as Spider-Man, or had a huge, toothy grin.

It's also true that it's not clear if the symbiotes have a standard form. Outside of the "Planet of the Symbiotes" storyline, most of the human/symbiote forms we've seen are ones that were aware of the appearance of Venom, and may have subconsciously copied that (with Kasady being the biggest variation - and the craziest individual we've seen bond with a symbiote).

The big exception would be the recent trilogy with the "Poisons". There, every host and symbiote seemed like a natural variation of Venom. However, that storyline seemed to indicate that all the characters may have come from different realities - it's possible that all the symbiotes involved were either alternate reality versions of our Venom symbiote, or descendants of same. This could account for the similarity of appearance.

We've also seen that the original bond seems to set a "default" form for a symbiote. Every host whose bonded with the Venom symbiote has wound up with a version of the Spider-Man black-and-white costume, and everyone since Brock with the bulkier form and the toothy grin. Similarly, when others have bonded with the Carnage symbiote, their appearance has matched his, and the powers used have tended to mimic his. So, it does seem likely that the initial bond the symbiote takes helps set a default appearance and power set.

We've seen other symbiotes (Klyntar) bonded to other hosts, and they don't obviously look like Venom or Carnage: 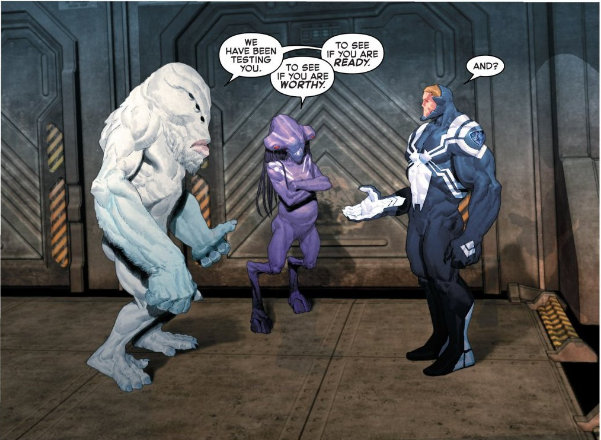 One can say they do look somewhat monstrous - but, we don't know what these hosts look like without their Klyntar. It may not be normal for healthy Klyntar to make their hosts look monstrous - that could be due to the bond with Brock (with others assuming that's what they should look like, and their symbiotes simply matching their expectations).

Superhero Comics often focus on the internal struggles of the hero. A common conundrum for them is not only what they're doing, but the ramifications of what they're doing. Spider Man in particular does this with Uncle Ben and the now famous line

The symbiote, by contrast, wants to control the host by feeding negative and powerful emotions.

Peter initially is turned into something of a monster. He goes on a power trip and acts callously and recklessly. It's when Peter's friends start to question his sudden personality shift that it really begins to get to Peter. He starts to question himself, and only then does he start to try and fight the symbiote.

I really liked the series symbolism here. They had the red costume vs the symbiote and the symbiote wins by devouring Peter (happens around 0:50)

Eddy Brock, however, is undergoing a crisis at the moment the symbiote attaches to him. He's been fired from his job and blames Spider Man for it. The symbiote feeds off of that character flaw to drive Brock to seek out and attack Spider Man.

Brock later comes to realize, as Peter did, that the symbiote is harmful to him, and is separated from it, only to willingly go back so he could fight Carnage (knowning he probably could not be separated from it again). It was his love for Dr Kafka that lead him to try and fight the symbiote and ultimately lead to the sacrifice he made for her.

Cassidy was already a psychopath. He needed no coaxing from the symbiote.

It has nothing to do with the person wielding the symbiote. Whether it's Peter Parker, Eddie Brock, or Cletus Cassidy it is the symbiote that is ultimately in control. The symbiote was happy while attached to Peter Parker, feeding off of his positive emotions, leaving only the negative thoughts left. When Peter discovered it was the suit making him change he rejected the suit. From this moment on the symbiote hated Peter Parker for rejecting him, and so it sought out others who hate Peter Parker, such as Eddie Brock. With the combined hatred of both the Symbiote and Eddie the symbiote "gave birth" to venom, and venom is what turns Eddie Brock into a monster. Carnage is venom's offspring so Carnage also turns Cletus into a monster.

Not the answer you're looking for? Browse other questions tagged marvel spider-man venom spider-man-tas or ask your own question.

6
Did the Venom symbiote inhabit the Hulk?
8
Do the Marvel symbiotes canonically drain the life force from the user?
9
Is Jack-O-Lantern part of the DC Universe, or the Marvel Universe?
21
What does the Venom symbiote subsist on?
2
Did the Radioactive Spider Bite Give Earth-616 Peter Parker Muscle Definition, Like in the 2002 Raimi Trilogy?
13
Why did Venom keep spider thread after separating from Peter Parker?
10
Why did Miles Morales get non-spider-like powers (bio-electrokinesis and invisibility) that are vastly different from the other spider people?
2
What is the formula for Spider-Man's base web fluid?
5
When or how precisely did Venom (Eddie Brock) turn from villain to hero?