How was Loki not crushed by Mjolnir?

In the Thor movie, Thor puts Mjolnir on top of Loki at the end of the movie to stop him from moving.

Why did this not crush Loki?

And if it did not crush him, why could he not just roll out from under it?

Quick and dirty answer without references?

Because the reason Thor's hammer can't be moved isn't merely because it's super HEAVY; Odin's enchantment on it means it can't be moved by anyone of insufficient "worth." Thus, Mjolnir isn't heavy enough to crush Loki, nor is Loki of sufficient worth to move it or roll out from under it.

Mjolnir or the Marvel Wiki.

"Worthiness Enchantment: This enchantment surrounding Mjolnir prevents it from being wielded by anyone save those who have been found worthy or anyone Thor deems acceptable to wield Mjolnir for a time; certain Asgardians, such as Skurge, have successfully lifted its handle from the ground, but not entirely lift Mjolnir itself. Thus far, this includes Thor, the Awesome Android, Odin, Tiwaz, Red Norvell, Beta Ray Bill, Bor and Captain America. To anyone else, Mjolnir cannot be lifted from the ground nor wrested from Thor’s grip."

Here is a picture from the scene in question, where Loki is pinned to the Bifrost by having Mjolnir placed on top of him. 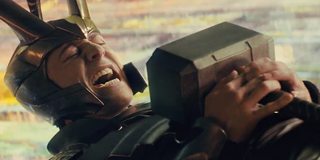 Here is a good look at the costume Loki was wearing in Thor. 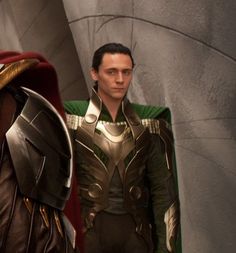 The simple answer is that Mjolnir was placed on top of the breastplate that Loki is wearing. It seems safe to assume that there is enough room between Loki's chest and his breastplate for him to breathe, as otherwise he wouldn't ever be able to breathe while wearing it.

Plus, we have to remember that Mjolnir was only on top of Loki for a handful of seconds, half a minute at most. After that, Thor realises that he must destroy the Bifrost, and calls Mjolnir to him in order to do so.

5
Can Mjolnir "stick" to anything?
-7
How was Loki able to breathe when Thor put his hammer on Loki's chest
0
If Thor's hammer is so heavy, why does it not crush the table it is on?
-6
Was Thor putting the Helicarrier in danger by dropping his hammer on floor?
54
Can Thor's hammer be wielded by anyone in outer space?
8
Why can't this truck lift Mjolnir but a Helicarrier can?

12
Why did Loki choose to antagonize Heimdall?
13
Avengers Movie - Loki and Thor Immortality Test
7
Prior to the spell cast on Mjolnir, did Thor control lightning on his own?
82
Why was Thor worthy to lift Mjolnir?
12
Why did Thor make Mjolnir look like an umbrella?
1
How did Loki touch Mjolnir in Thor (2011)?
6
Why did Loki lie to Thor that Odin was dead?
20
Why did Odin cast Mjolnir to Earth?