Who is the disapproving hobbit?

During one of The Lord of the Rings films I have a memory of a very curmudgeonly old hobbit, sweeping his porch or walk, I think, as he looks disapprovingly at some of the protagonists going down the road by his house.

Who is this old hobbit?

Does he have a part in the books?

In the book, the character is named Odo Proudfoot, and the scene at Bilbo's party is very similar to the book. Why they would invent a new name when this film character does exactly the same things as the book character is odd. 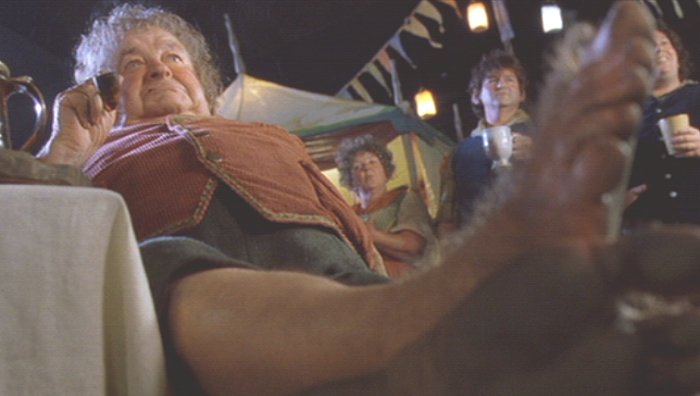 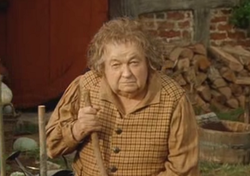 He is a Hobbit invented for the films and is played by Noel Appleby.

I believe this is the scene that you are referring to:

Mr. Proudfoot was a grumpy old gaffer, who minded his own business and tended his garden. However, he enjoyed Gandalf's fireworks and only expressed his disapproval when his wife arrived. He was present at Bilbo's Farewell Party. He later met the four hobbits as they returned home from their journey.
Everard Proudfoot

While credited in the film as "Everard Proudfoot" it does seem that this character was based on Odo Proudfoot from the books.

If the old man you're talking about is the one pictured below, that Noel Appelby. He's credited as Everard Proudfoot on IMDB 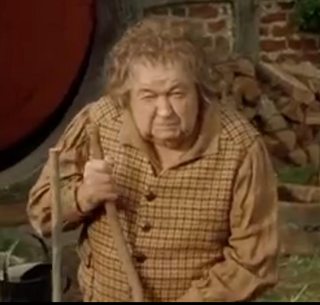 The only one mention of an Everard in the Lord of the Rings and it is one Everard Took, so unfortunately this character does not feature in the books.

Master Everard Took and Miss Melilot Brandybuck got on a table and with bells in their hands began to dance the Springle-ring: a pretty dance, but rather vigorous.

It would seem that although this first scene of the character is invented, the later on of our friendly Everard Proudfoot stamping his feet (as noted in @NKCampbell's answer) is in fact based on old Odo Proudfoot. Who is in fact Frodo's maternal Grandmother's aunt's son.

As per the request from OP below is the footage from which I took the screencap:

66
Was Gollum always a hobbit?
39
What non-canon elements were added to The Hobbit: An Unexpected Journey
8
What was the particular risk in the road out of the Isenmouthe?
35
How does an orc perceive a hobbit?
40
Did J.R.R. Tolkien ever write a deeper connection between The Hobbit & The Lord of the Rings: The Fellowship of the Ring?
10
Should I watch the Hobbit trilogy before the LotR trilogy?
3
Why don't any characters sing in the 2nd and 3rd Hobbit films?