I'm looking for a novel that I read 30 years ago (1980-1990s?) about a group of people who worked in pairs of couples as telepath/telekinetics that watched out for humans. In the book, some humans had telepathy, telekinesis, pyrokinesis or communication with insects. The humans usually had only one ability and they were fairly infrequent. The "watchers" had all these abilities and hid amongst the humans. There were a several couples of watchers that lived on Earth and I think the moon & Mars were colonized. It started out with the watchers getting involved as detectives in a murder case. The book ended with something about a voracious group of aliens (Denebs maybe?) that were coming to our system. I remember there was a metaphor of the aliens devastating regions of space like moths.

Could this be Sentinels From Space by Eric Frank Russell? There's an extensive list of mutant types mentioned in the novel including those who can influence insects. The main antagonists are the "Denebs".

Called before the World Council, Space Captain David Raven is told that he must stop a clandestine war being waged against Terra by people seeking independence for Mars and Venus. The Council's leader, Oswald Heraty, tells him that Humanity is on the verge of interstellar flight and that there have been hints of intelligent life "out there": Heraty wants Humanity to face any potential dangers as a unified society, so he doesn't want Mars and Venus gaining independence. After leaving the Council, David goes to see Mr. Conrad, the director of the Terran Security Bureau. As true telepaths, Conrad and David speak mind to mind. Conrad gives David a list of the twelve known types of mutants and notes that the clandestine war is being waged by mutants sabotaging Terran infrastructure.

David returns to the home that he shares with his companion, Leina, and shortly a team of phony police officers arrives. David switches bodies with the hypno and then with hypnotic power convinces the others on his team that David has already left. Later David reverses the switch and obtains from the shaken hypno the identity of the leader of the sabotage effort, a Venusian insectivocal named Arthur Kayder. Visiting Kayder, David obtains from Kayder's valet the information he wants on the underground base from with the saboteurs launch their attacks. He then goes to the spaceport and boards a ship bound for Venus. 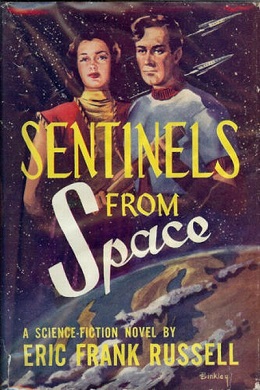 The reference to moths relates to a form of life after death. Humans are simply the "grubs" of a race made up of force-fields rather than material bodies.

"Now and again one [grub] more daring than the rest might have sneaked from the hiding-place of its own grub-conditioning and peered furtively into the dark and seen a great bright-eyed moth like a nocturnal butterfly beating gloriously through the endless night. And it would cower down, sorely afraid, totally unable to recognise - itself ! - - - As instinctively as a baby moves feet it is not consciously aware of possessing, or a kitten similarly puts forth claws, so did he spread forth huge, fan-shaped fields of force and swoop in the wake of his fellows - - he knew what he had become and what the little white grubs [ie humans] had yet to be. Homo In Excelsis."

9
Sci-fi book about psychic “humans” protecting/hiding Earth from the approaching Denebs
7
I read a book in the 60s where many people had one mental power. One man had many
4
Find title of a book about a race searching for giant space moths
2
Sci Fi book about ESP. Each person with ESP has just one power