Has anyone ever used a pencil while at Hogwarts?

From the Slytherin Welcome Message:

We also get respect from our fellow students. Yes, some of that respect might be tinged with fear, because of our Dark reputation, but you know what? It can be fun, having a reputation for walking on the wild side. Chuck out a few hints that you’ve got access to a whole library of curses, and see whether anyone feels like nicking your pencil case.

I was always under the impression that everyone at Hogwarts wrote with ink and quills, so why would they need something to hold pencils?

Does anyone at Hogwarts ever use pencils or pens to write with?

Pencils are used in at least one scene of at least one film, where they appear alongside quills as an alternative. 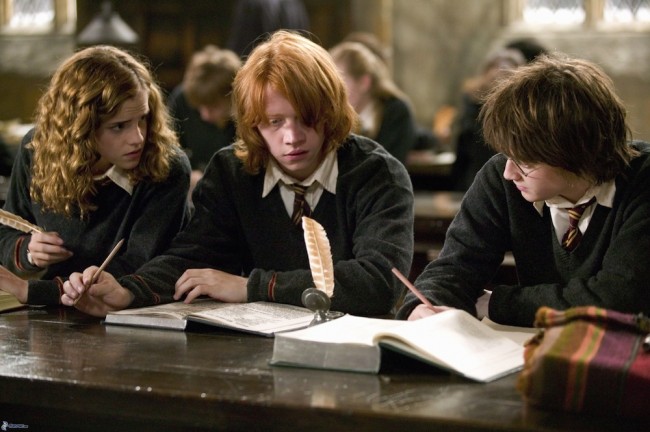 I believe this scene was in The Goblet of Fire.

This makes sense to me as a simple wooden pencil as seen appears to fit the setting and as in most schools you'd have ink or pencil to choose from, the filmmakers decided so can Hogwarts.

It is never mentioned in the books though, and even Harry's drawing of a Bowtruckle for Professor Grubbly-Plank is made with his quill. (Page 241 OotP)

No, or if they have it's never mentioned.

No one is ever mentioned as actually using or having a pencil at Hogwarts in the seven books. However, there are two mentions of students having pencil cases.

“...and Parvati and Lavender, who were practising basic Locomotion Charms, were making their pencil-cases race each other around the edge of the table.”
- Harry Potter and the Order of the Phoenix, Chapter 31 (O.W.L.s)

Hermione, Lavender and Parvati all have a pencil case.

“Oh, yes,’ said Hermione in a choked voice, taking her things and turning away quickly to hide the fact that she was wiping her eyes on her pencil case.”
- Harry Potter and the Half-Blood Prince, Chapter 15 (The Unbreakable Vow)

Yes, people do use pens, which they attach to quills. If they have pens, they could store them in a pencil case. Why they are still called pencil cases instead of pen cases, or quill-tip cases, might be mere tradition.

Dolores Umbridge has a set of pens on her desk in this scene where she uses her "special" quill to punish Harry Potter.

I can't remember any student using pencils specifically, or anybody else for that matter.

Side note: I think this would come under the purview of the Ministry Department called Misuse of Muggle Artefacts. Perhaps somebody should notify an employee of that department, such as Arthur Weasley, that Ms. Umbridge is misusing pens.

67
Why don't the students of Hogwarts write with ballpoint pens?

3
Does the Taboo jinx work while in Hogsmeade and/or Hogwarts?
13
Has anyone ever been unhappy with the sorting hat's decision?
54
Is anyone at Hogwarts married?
37
In canon, has anyone other than Hagrid been expelled?
7
Who has access to the Restricted Section of the Hogwarts Library?
44
Why were weapons like Mandrakes and Acromantula, which kill indiscriminately, used in the Battle of Hogwarts?
29
Has a non-human ever attended any Wizarding school?
1
Did any Hogwarts Professor ever forget their student's name?
47
Has Dumbledore ever killed anyone?
3
Has Slytherin or Gryffindor's portraits ever spoken on the events happening at Hogwarts?