I read this series in the 80s I think. It was set in the Stone Age or earlier.

There was the usual disparate band of youngsters but who had time travelled from the near future. Think there was a reality show theme to it. One or more had increasing telekinetic powers.

The climax of one of the books was a was the breaching of a the straits of Gibraltar leading to the formation of the Mediterranean.

The Saga of Pliocene Exile (or the Saga of the Exiles) is a series of science / speculative fiction books by Julian May, first published in the early 1980s. It consists of four books: The Many Colored Land, The Golden Torc, The Nonborn King and The Adversary.

At the start of the story the Strait of Gibraltar is closed and the Mediterranean Sea is dry and empty. The Many Colored Land and The Golden Torc are set in Europe just before and during the rupture at Gibraltar.

The rupture and the rapid filling of the Mediterranean form a Wagnerian climax to The Golden Torc, in which aliens and time-traveling humans are caught up in this cataclysm.

The Saga of Pliocene Exile (known as the Saga of the Exiles in some markets) is a narrative surrounding the adventures of a group of late 21st and early 22nd century misfits/outcasts who travel through a one-way time-gate to Earth's Pliocene epoch, in the hopes of finding a simple utopia where they can escape the complexity and politics of the modern post-intervention intergalactic society.

This sounds a lot like the Saga of Pliocene Exile by by Julian May:

At the start of the story the Strait of Gibraltar is closed and the Mediterranean Sea is dry and empty. The Many Colored Land and The Golden Torc are set in Europe just before and during the rupture at Gibraltar. The rupture and the rapid filling of the Mediterranean form a Wagnerian climax to The Golden Torc, in which aliens and time-traveling humans are caught up in this cataclysm.

The series features a dimorphic race of aliens ('exotics'), the Tanu and the Firvulag which use metapsychic powers. Added into the mix are 21st and early 22nd century human misfits/outcasts who travel through a one-way time-gate to Earth's Pliocene epoch, in the hopes of finding a simple utopia. In all there are ten books set in this universe.

Reference:
https://en.wikipedia.org/wiki/Saga_of_Pliocene_Exile (Saw the earlier comments only after answering; had to look up the details having read this series so very long ago)

As noted in the comments, Julian May's Saga of Pliocene Exile fits well.

In the (relatively) near future, instead of sending criminals to prison, they're sent on a one-way time travel jaunt to the distant past. Surprisingly, they arrive to discover that they're even worse off than expected; two opposing alien forces are running things, and pick up humans to be their slaves when they're sent back.

However, humans have begun to develop "metapsychic" abilities (as seen in May's related books, Intervention and the Galactic Milieu trilogy (Jack the Bodiless, Diamond Mask, and Magnificat)); and, several of our time-displaced humans seem to have latent abilities that get jump-started into activation by the time jaunt, and/or the stressors involved.

And, yes, what was dry land when our viewpoint characters arrive is the Mediterranean Sea by the time they're done. 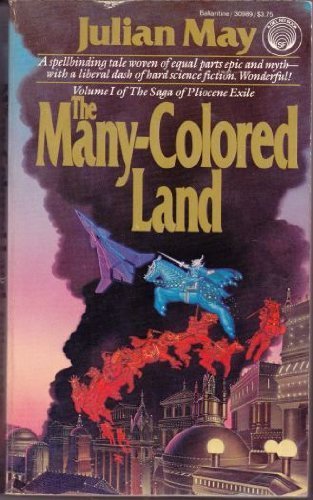 Oddly enough, this and The Gandalara Saga came out at about the same time, and both included the creation of the Mediterranean Sea.

Do you mean the The Gandalara Cycle?

Ricardo Carillo, an aging language professor with a terminal illness, is flirting with a captivating young woman on a Mediterranean cruise ship. They both watch with wonder, and a growing horror, as a dazzlingly beautiful star quickly grows to engulf the sky and then crashes into the ship.

Ricardo awakens in a blinding hot desert, with no idea where he is and a dead man by his side.

Without knowing how or why, Ricardo finds himself inhabiting the body of a strong, healthy, young man named Markasset. Ricardo quickly learns that Markasset is wanted for murder and the theft of a precious and powerful gemstone, the Ra'ira. Ricardo has only a smattering of Markasset's memories, and no idea if he is guilty or innocent. But with the help of a giant warcat named Keeshah, with whom he shares a telepathic bond, and the beautiful illusionist, Tarani, Ricardo sets out on a quest to recover the missing gemstone and clear his new name.

Cover of first book (from Wikipedia): 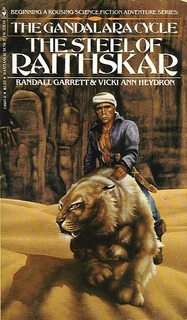 9
Book series about time travel from future to distant past, psychic powers?
6
A book where a man inhabits the body of a dying man and befriends a telepathic cat

5
Looking for a creepy worm in a movie scene
8
Trying To Remember Time Travel Story
10
80s Fantasy: Reluctant king with magic crown that loses powers when cold/wet
8
Help me identify a 1980s trilogy of books about a space faring rock band
6
Story Identification: Series of time travel novels with historical fictional elements
6
2000s novel with a journalist trying to stop a Bill Gates character from taking over the world, said plot somehow involving the Dead Sea Scrolls
6
Soviet Sci-Fi movie from the '60s(?)/'70s(?)
13
Three teenagers from the 80s unwillingly travel back in time to London during the Black Death