Is the Leigh Brackett first draft of the script for Star Wars episode 5 available?

After the success of the original film, Lucas hired science fiction author Leigh Brackett to write Star Wars II with him. They held story conferences and, by late November 1977, Lucas had produced a handwritten treatment called The Empire Strikes Back, and asked her to write a draft from his notes.

Brackett finished her first draft in early 1978. It was similar to the final film. It reportedly contains

But there are supposed to some differences between her version and the final film.

Lucas has said he was disappointed with it, but before he could discuss it with her, she died of cancer. With no writer available, Lucas rewrote the next draft himself.

Is her first draft of the movie script available?

You can find it online here in PDF form, and here on starwarz.com

Luke's father appears as a ghost.

Here is a snippet of the scene mentioned: 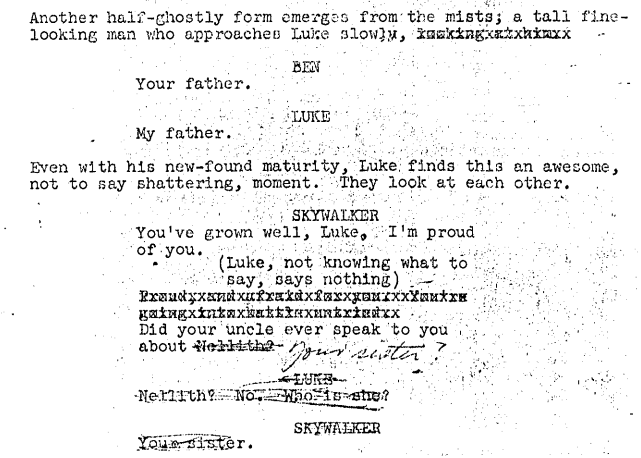 Luke's sisters name is mentioned in the scene as Nellith.

On page 82 of the PDF, Lando Kadar is introduced

Here is a snippet of the scene:

Not the answer you're looking for? Browse other questions tagged star-wars behind-the-scenes the-empire-strikes-back or ask your own question.

28
Did Yoda definitely know who the other hope was?
29
What was wrong with the Millennium Falcon in Star Wars Episode V: The Empire Strikes Back?
20
If Darth Vader discovered Luke was his son from the Emperor in the 2004 retconned version of “The Empire Strikes Back”, then how did the Emperor know?
138
How many times was Obi-Wan less than honest with Luke?
59
Was the original Star Wars film originally called "The Star Wars"?
3
Who wrote the music for the first Star Wars movie bar scene?
42
What were the prevailing real-life cultural connotations of "clones" in 1975 (Star Wars' 3rd draft)?
5
What were the job parameters for the original Revenge of the Jedi poster?
7
Did Obi-Wan Kenobi know how to destroy the Death Star without the help of the stolen plans?