Why did Gambit always use the Ace of Spades?

In the 90s X-Men animated series, it seems that the only card we ever see Gambit use was the Ace of Spades.

Perhaps because the Ace of Spades is a common depiction of playing cards? As I can't imagine that it's the easiest suit for the artists to draw (surely diamond is).

Here are some examples:

The first is that in many card games, the Spades suit is considered the high suit.

Ascending alphabetical order: clubs (lowest), followed by diamonds, hearts, and spades (highest). This ranking is used in the game of bridge.

The second reason is that the Ace of Spades has a historical association with death.

The Origin of the Ace of Spades as the Death Card

As noted above, playing cards gradually evolved over time from the sets first developed by the Chinese in the 900s. As playing cards spread westward over the centuries, the look and depiction of the four card suits and face cards, among other things, were subject to individual, regional and cultural tastes and refinements. For instance, the Italians depicted the forerunner of the modern spade symbol as a sword, while playing cards produced in Germanic countries used a leaf standing on its stem for the same symbol/suit.

In order to simplify the design of playing-card suits to aid in their mass-production, the French used the silhouette of the Germanic upturned leaf, which resembles the modern spade, but the spade symbol likely retained its association with war, killing and death.

In Latin, the word spatha, the forerunner of the modern English word spade, means "broad, flat weapon or tool." In addition, the French referred to this suit as piques, meaning pikes. A pike was a two-handed stabbing weapon of warfare comprising a long wooden shaft topped by a flat, pointed blade. It's not difficult to see in our modern spade symbol the image of a pike blade.

Just as linguistically significant, however, is the fact that a spade also refers to a type of shovel with a wide, flat, thin blade, often used to dig a grave. Even in today's era of mechanical excavators, spades are still used by cemetery workers to crisply cut the grave outline in sod and/or to finish the sides/floor of the grave.

During the Vietnam War, the Ace of Spades became symbol of death amongst soldiers

during the Vietnam War, American GIs began a tradition of placing the ace on a dead body, or leaving it in a village. Thus ideas like “being aced” were linked to death and dying. GIs would even sometimes wear the Ace of Spades in their helmets as a sign that death was coming with them as a fear tactic.

Ever since Vietnam, the use of the Ace of Spades as a symbol of power and death has been a permanent link in the minds of many Americans. The use of the card in tattoos, and even in music such as Motor Head’s famous “Ace of Spades,” has only made the notorious associations even harder to ignore. However, the card is just one more in the deck… though it still sits pretty in one of the most powerful places in the cards.

Given that Gambit is both a gambler and superstitious, both of these reasons would make sense why he would often use the Ace of Spades.

Out-of-universe, this may be be a sort of nod to the comics.

While Gambit's first appearance was in Uncanny X-Men 266, he did not use playing cards until the next issue. He uses them twice, and in both instances, he uses the Ace of Spades. 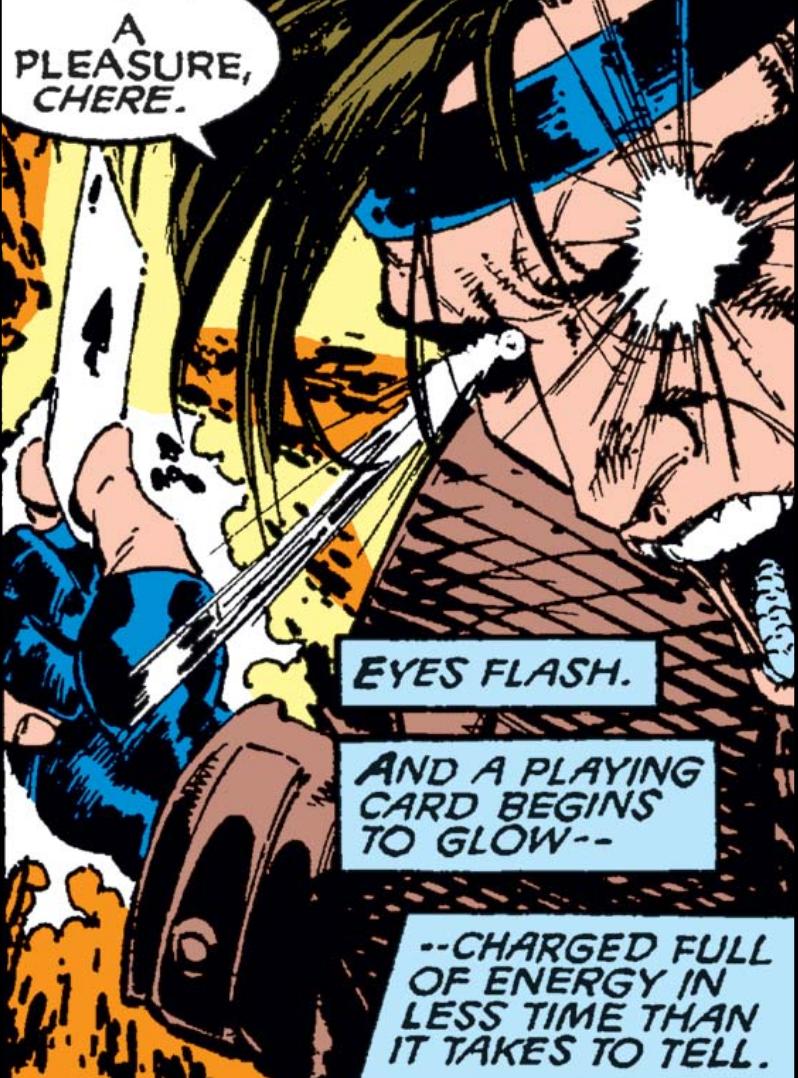 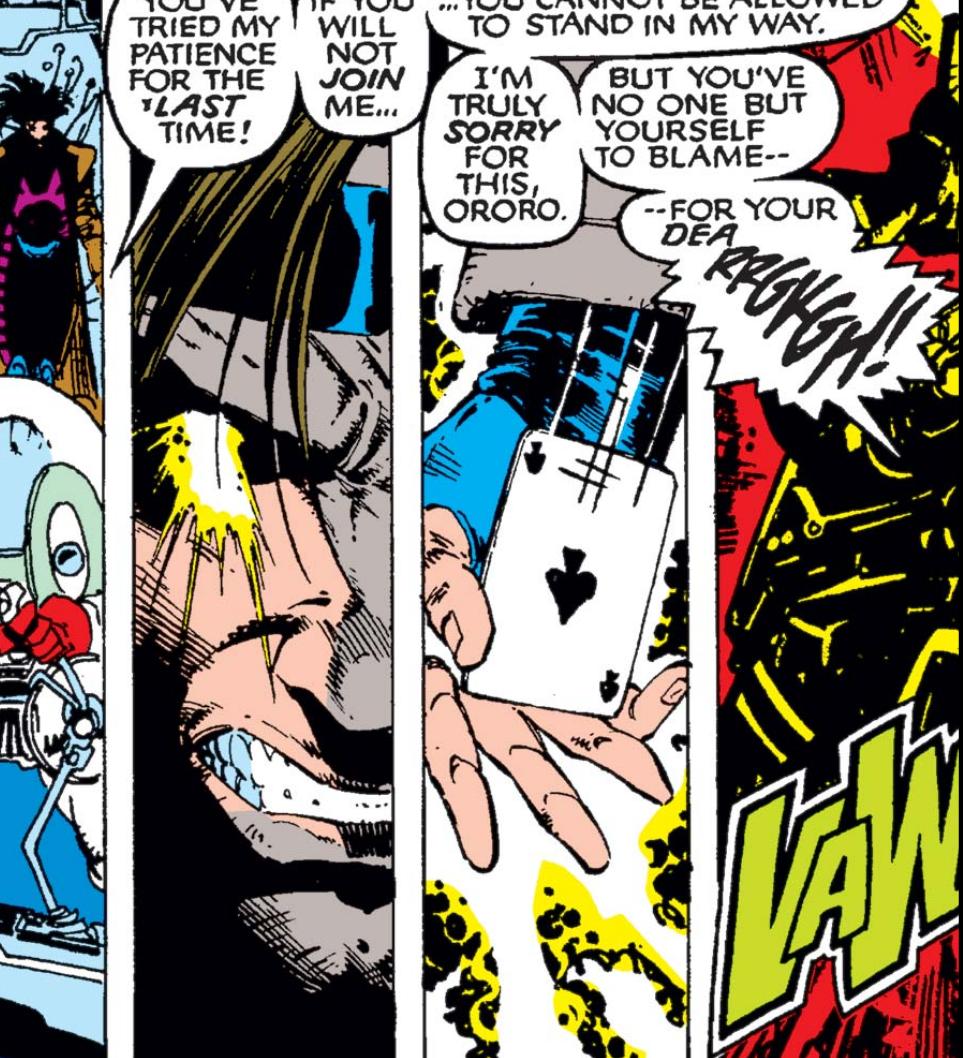 However, ten issues later, Gambit was drawn with a discernible playing card again (though he only appears to have used them once in that time). Jim Lee (the same artist as before) next drew him with another readable card - this time the Ace of Hearts, so Gambit does not always use the Ace of Spades in the comics. 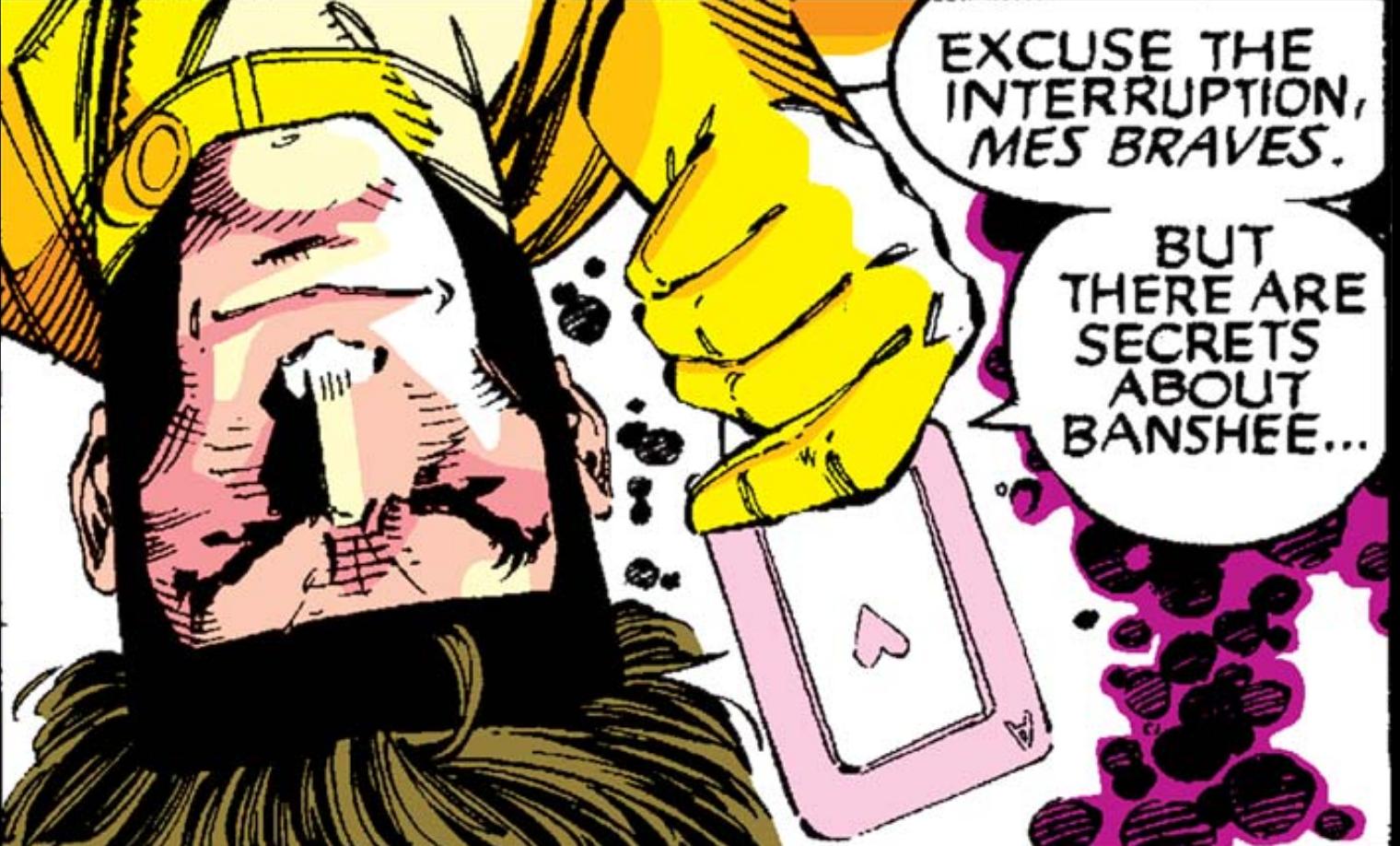 Of note, since this time, Gambit has definitely become linked to the Ace of Spades - often using it or the Joker when throwing only one visible card. Even the game Avenger's Alliance makes the connection, making The Ace of Spades one of Gambit's attacks.

21
Did Chris Claremont have to change his long-term plans for the X-Men in the early '90s?
7
Does Gambit have a forgotten power of creating illusions?
19
Old Man Logan - how did the Hulk end up as a villain?
11
Does Rogue ever take advantage of the removable power suppression we see?
4
Why didn't the mutants in the Danger Room use weapons?
5
Why wasn't Gambit included in the X-Men Cinematic Universe?
2
Can or has the Spider-Sense ever been used offensively?
4
Does Storm have any family, i.e. are Spyke and Mij'nari canon in the main Marvel universe?