What nation is Pema from?

We do not know this for sure.

This is never outright stated in the show, so I have been trying to deduce the answer going by two things: Pema's name and her eyes.

Pema is a name common in Tibetian Buddhism: the sister of the current Dalai Lama is called Pema Jetsun, and the first Dalai Lama's birth name was Péma Dorje. While it is not impossible that this is her birth name, it is quite possible that Pema took her name when she became an Air Acolyte. This is in line with the practices of real-life Buddhism where if one goes for Refuge (take religious vows), but we do not know for sure if this is a common practice within the New Air Nation (the new Air Nomads from Book 3 & 4 don't take new names on screen). As such, Pema's name cannot be relied on to determine her ethnicity.

Then there's the second option: her eyes. 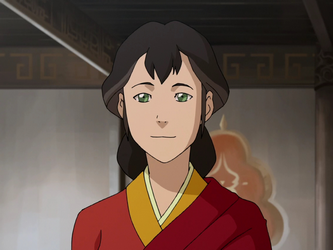 Pema's eyes are an obvious green. This is common within the Earth Kingdom, but that does not automatically mean that she is of Earth Kingdom descent. This has been looked at in another question, where it has been determined that one's eye color is not inherently linked to their ancestry. In fact, Pema's and Tenzin's firstborn, Jinora, has brown eyes unlike both her parents.

However, it is worth noting that until very recently the four nations of the Avatar world were rather monoethnic, meaning that certain traits were common in certain groups, like for example green eyes in the Earth Kingdom. The monoethnicity of the world's nations began to decline with the founding of the colony of Yu Dao by the Fire Nation during the Hundred Year War. This was a place where Fire Nation and Earth Kingdom citizens lived alongside one another in large numbers, which led to the colony becoming a genetic melting pot of sorts. When the war ended and Yu Dao started to transition into the the captial of the new United Republic this only increased with the influx of new citizens, including from both Water Tribes. A case similar to Pema is Asami Sato: 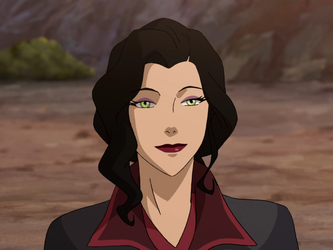 Asami also has green eyes, but her father's are maroon. Asami's name, those of her parents (Hiroshi and Yasuko) as well as their surname, her preference for the color red (which is not genetic but plays into the theme) and the fact that her family's status and wealth matches up with the early days of Republic City where the upper class consisted of Fire Nation colonists. But yet Asami has green eyes, which suggests a hint of Earth Kingdom ancestry somewhere in her family tree despite her superficial Fire Nation looks. So don't rely on the eyes too much, for looks are deceiving.

As such, the two most likely candidates for Pema's ancestry are Republic City and the Earth Kingdom. But because there is no definite proof for either case, this question cannot be answered definitively.

18
Have people made a correlation with eye color and bending element in Avatar?

17
How does the Fire Nation survive through the 100 years between appearances of Sozin's comet?
13
Who is still alive from the original series?
27
What stops other benders from mastering the four elements?
9
What printed materials from Avatar: The Last Airbender are canonical?
13
How did the fire nation kill all airbenders?
2
Did the Fire Nation support child labour?
34
Where do Airbender babies come from?
7
What nation do the residents of Kyoshi Island belong to?