Book - Title mentions a falcon or peregrine, cloak on the cover, includes menstruation as a teen problem

The bits that are remembered have to do with, or the title is something about a falcon, or peregrine (which makes googling impossible - every result shows "Miss Peregrine") There's someone in a dark cloak on the cover. And the hero is a teenage girl who deals with real issues in the book, like menstruating - which is why she remembers the character. As a teen, it was cool the main character dealt with real issues.

And that's literally all I have to go off of. Needless to say I've hit a ton of dead ends. Sound even remotely familiar to anyone?

So far I've dug up these ones which don't completely match:

This one is a long shot, but maybe Hawkmistress by Marion Zimmer Bradley?

The main protagonist is a girl struggling with the limited traditional role for women in her world. She runs away and works as a bird keeper for sentry birds. She had trained her own hawk before she ran away (this precipitated the crisis).

She does have to deal with menstruation as an issue (in one scene she uses it to delay being forcibly married, so she can run away. In another place it comes up because she has to deal with it while on the trail, disguised as a boy. Not primarily as a "teen problem", as you mentioned).

I don't know if there was an edition with someone in a dark cloak on the cover; the cover I recognize has her with her trained falcon. Cloaks were worn; it is a cold planet. So there might have been such a cover; not sure. Other books in the series probably had people in cloaks on the cover, though I don't remember offhand.

If anyone is still interested here It could be the Path of Fate by Diana Pharaoh Francis. It’s one in a trilogy!

It doesn’t have falcon in the title but there is one on the cover with the girl in the dark green cloak and she has a pet falcon (sorta) in the story. 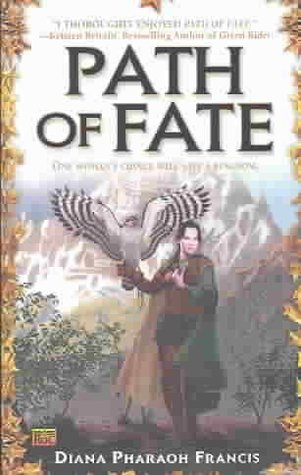 4
What book had a Japanese title, a futuristic samurai head on the cover, and spelled America “Amerika”?
16
First book of a series: boy disappears from his life, becomes time travelling agent
8
What is the title/author of this obscure SciFi book where aliens sell coffee?
6
Trying to remember a sci fi book title I read in the 80s
8
Book about a boy that enters a medieval fantasy PC computer game
13
90s (or earlier) cross-world fantasy book with a circular river and character-class tattoos