I'm looking for a series I read five or more years ago, about cats (strays, but also house cats) who I'm pretty sure lived in a fairly big city and had some kind of ability that involved seeing strings(?) or nets or tangles or something like that in the air, and 'fixing' them, or maybe using them somehow. I remember--though this might have been a different novel--a section about a ame the cats of the city played, which I believe was about finding a perch where you could see as many other cats as possible, with as few of them seeing you?

I think that at least one of the books (of which I read two, not sure if there was more) had something do to with 'moon' in the title, and I think the second one had to do with kittens and a queen?

I distinctly remember one scene where the protagonists are in a subway or train station and find the body of a young cat on the tracks, who I'm fairly certain turns out to be still alive.

The first book is Diane Duane's 'The Book of Night with Moon' aka, 'The Cats of Grand Central Station', the second 'To Visit the Queen' aka 'On Her Majesty's Wizardly Service.' (The second titles represent the UK printing titles.)

They are part of / related to the 'Young Wizards' series.

The kitten you mention is named 'Arhu.' The game is called 'hauissh' (literally 'The Fight') and is symbolic of a Historical / Mythical fight from pre-history.

"...You tell me now, young tom: who do you think's holding down the most important stance at the moment?"

Arhu looked around him in bemusement. "Her," he said, flirting his tail sideways to indicate the handsome chocolate-brown cat who crouched, immobile as a statue, on one of the nearby walls between two buildings.

"And you wouldn't be too far off. Trust Hmahilh' to hog a good spot at the earliest opportunity. But why?"

The cats Rhiow, Saash, Urruah (and later Arhu) maintain the Grand Central Station World-gating facility; they control it by plucking the 'control strings' of the gate.

It's an enjoyable series; it started as the YA Wizard books, but these (the Cat books) were written to venture a bit more away from the YA market, and even the base series itself has slowly grown up along with it's main characters. 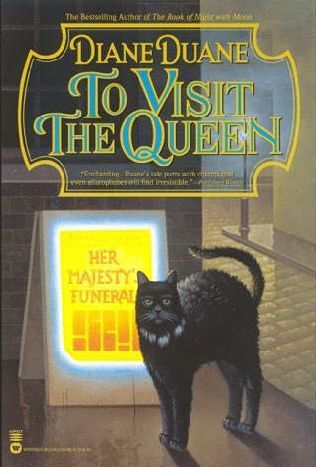 5
Youth/YA Boy with telepathic panther
6
Story identification - possible series, alternate universes, maybe some kind of police force?
10
Book based on a waterworld with a monstrous overlord
5
Fantasy Book: Young boy finds magic circles in cave
5
Looking for a fantasy book about a girl who could talk to cats
7
Book series where magic system involves building metal things (animals)-one of them can fly and drop orb like bombs
8
Book about small people living hidden from humans in a big city
15
Book series about a boy who becomes a wizard's apprentice and can see magical auras
11
Domesticated cats become intelligent, grow "hands" and wipe out humanity