Comic about 3rd reich after WWII

Some Years ago I discovered a comic someone posted on imgur.com.

It was about a Pilot of the German 3rd reich in a parallel universe, where the Nazis won the war.

It featured many of the experimental aircrafts, especially a non symmetrical plane, originally made by Bloom & Voss.

The pilot was very high decorated, I think with the highest medal possible. The comic was completely collored.

I tried for some time to find it, but neither imgur itself nor google could help me.

How about Hans Vogel is Dead? 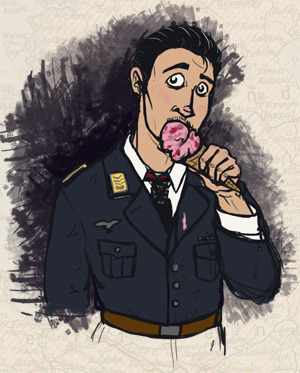 A Luftwaffe pilot, son of a Freikorps fighter, and graduate of the Hitler Youth, Hans Vogel is a mild-mannered young man of 22 whose apathetic views toward politics in the Third Reich has earned him a rather cushy career. He doesn’t ask any questions, and nobody comes looking for him late at night. When a bombing mission over England goes awry, however, Hans is shot down in flames and is killed immediately on impact.

Unfortunately for him, that’s where his problems begin.

You might be thinking of the comic book series Luftwaffe: 1946, written and drawn by Ted Nomura. It began being published by Antarctic Press in 1996. A long, long time ago, I bought a secondhand copy of a trade paperback which I think collected the first few issues of the Luftwaffe: 1946 series, although there were references in it which made it clear that it tied in with stuff which previously had been published in some other comic book series.

I did not find the writing captivating, and I've never bothered to look for a chance to buy any other stuff set in that alternate-history timeline. About the only things I clearly remember from it are:

I did some Googling just now, and here's a scanned image of a sample page which probably shows the same female pilot I was remembering (although I can't swear to it). If the art style seems to ring a bell in your memory, then we're probably talking about the same comic book series. (And if not, we probably aren't.) 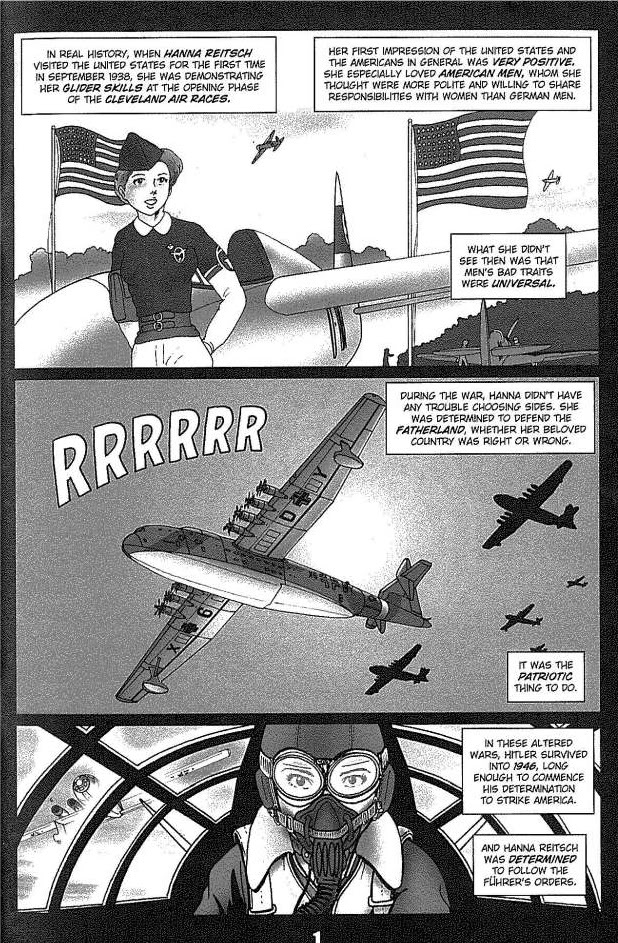 P.S. I dug around and found a brief online review by someone whose memory of the series was a lot fresher than mine when he wrote it. Here's an excerpt from what he says:

This is an alternate universe story in which Hermann Göring's death in 1918 and the 1937 discovery of a buried flying saucer allow Nazi Germany to pour more resources into development of Wunderwaffen. The Axis powers are more successful and the Allies less so, so the war drags on. This comic book series (actually several mini-series and special editions) is really a framework for Ted Nomura to draw highly detailed pictures of hypothetical German aircraft as if they had gone into operation. The depictions of aircraft, ships, tanks, etc., are outstanding. His character work is strongly influenced by Japanese manga and thus drifts away from the realism displayed in his vehicles. The writing does not measure up to the artwork.

It's perhaps possible you're thinking of Twilight X by Joseph Wight, published by Antarctic Press. It's not, strictly speaking, about the Nazis winning the war, but rather about Neo-Nazis in a post-World War 3 future. But it does get very detailed in terms of aircraft and such. An example:

This is likely a fairly long shot, but it seemed worth mentioning.