Why didn't Littlefinger reveal Arya's identity to Tywin Lannister back at Harrenhal?

I'm talking about the scene in season 2 episode 6, when Patyr Baelish visits Tywin to talk about Renly's death and a possible alliance between the crown and the Tyrells.

During this time, Arya is Tywin's cupbearer and is the only person, who's allowed to be in the room, as a servant.

There is a huge hint that Petyr actually recognized Arya. It's at the time when Arya accidentally spills wine next to Littlefinger.

'It's only wine' Petyr replied and gave her this look: 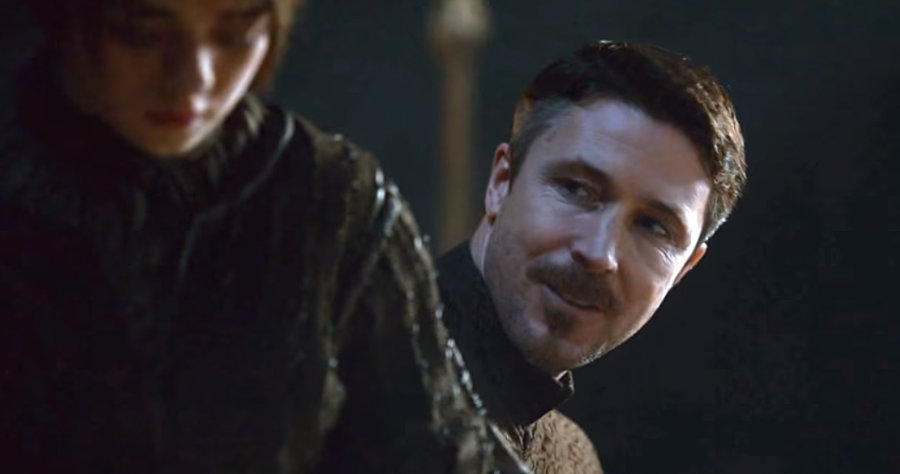 Now, it seems highly likely that he recognized her at the moment, because he automatically lost the thread in his conversation with Tywin.

It took him more than a second to answer Tywin's next question. It's almost like for a second there he was calculating whether or not it would be profitable for him to tell Tywin about his cupbearer.

Apparently, he decides not to, and that's why I have this question. Why did he decide not to reveal Arya's identity? How could he benefit from that decision?

I think it's important to remember that Littlefinger has nothing to gain from strengthening Tywin's hand at this point. His objective is to foster chaos in the realm, and by keeping Arya's identity a secret, he does that by potentially allowing her to escape and rejoin the Starks.

"Chaos is a ladder."

Also, maybe he secretly hopes he can get her out of Harrenhal and get it on with Catelyn Stark after rescuing her daughter... ( ͡° ͜ʖ ͡°)

Littlefinger is always looking for someone to owe him a favor and keeping his options open.

He also knows that the Lannisters might try and trade the Stark girls for Jaime, but knows they can not do so without having both. Cersei had tasked Littlefinger with finding Arya before she could escape King's Landing, which he obviously unsuccessful at. So he is quite surprised to find Arya at Harrenhal and especially surprised she is with Tywin.

Littlefinger is able quickly to deduce that Tywin does not know who he has as a cup bearer, otherwise Arya would be locked up safely in a cell and guarded to facilitate her transport back to King's Landing as a hostage. However, he is not quick enough to devise a scheme to take Arya with him in an attempt to further his own gains.

He does not tell Tywin because there is no direct benefit for him.

Knowing Littlefinger, had he recognised Arya, he would have caused commotion between Tywin and any relevant relevant enemy of his. Plus, He would have mentioned it at the end when he was in was in Winterfell, where he had free communication with Arya and Sansa, or at his trial, before he was sentenced to death.