For the life of me, I can't remember if it was called 'Fantastic Tales' or something like that, but the book I lost a few years ago had some very excellent short stories in it.

In one story, two geologists discover an opening to a subterranean world when they come across a ventillation shaft that leads to a giant air processing facility that provides air for a race of creatures who are similar to humans only they do everything crazy and backwards. The opulent women used products and treatments that make them look hideous, because they think it is beautiful and the lower-class women were gorgeous because they couldn't afford the treatments. They drive these little vehicles wildly about wherever they please, often crashing and dying. They wage wars with fantastic machines that shake the Earth above (origin of most of our earthquakes) and they have a theater where people can watch the wars in VR. The main charachter is captured and they try to execute him with a death ray but it doesnt work on his physiology so instead he is adopted into their society and actually thrives. He gets a job running the air handler facility and eventually discovers that one forgotten valve can shut air off for the entire subterranian world. Using this valve, he creates a tragedy which he 'saves the world' from and becomes the leader of the underground people. He eventually tires of the madness of the underground people and shuts the air valve off and leaves, returning to the surface with his friend. His friend had a similar experience that wasnt elaborated upon, as they were separated by a cave-in at the beginning of the story. His friend went on to become the leader of the rival clan to his own people and after they discovered each other they sent coded messages to one another and met up and played their people against each other to bring peace which ended up driving everyone crazy because they loved war so much.

Another story had astronauts exploring other worlds. They find a paradise where wonderful beautiful women sprout from plants that read their genetic makeup and produce their perfect mate. The head astronaut abandons his colleague who is enraptured and under the spell of the paradise plantwomen. He launches missles from space that obliterate the planet, since it would cause the downfall of mankind if they came there. They would be willingly enslaved by the plant women. He makes a log entry in his computer about how its like the 10th or 12th planet with such a type of alluring paradise that he's had to destroy in similar fashion.

Another brilliant story describes scientists who discover how to control out of body experiences and figure out how to project their minds to this other plane of existence. The problem is that whenever they do, they feel an invisible presence there that scares them so badly they terminate the session. Finally, one of the scientists gets brave enough to confront the presence, and unintentionally melds with it, discovering that it is the conscious mind of aliens far away across the universe who are conducting the same experiments with astral projection. They talk for a while and part ways, with promises to meet again and again, to learn and share with each other.

Please, if anyone recalls this book or any of the stories within, let me know what the title is. I would be most appreciative because I want to share these stories with friends. Thank you for reading and I hope someone knows the answer.

The middle story sounds a lot like Norman Spinrad's "Child of Mind". Was one of the astronauts a sadist who like to beat the "woman" and another a "mama's boy"?

Anyway the story appeared in "Last Hurrah of the Golden Horde". Here's a link to a listing of other places that story has been reprinted: http://www.isfdb.org/cgi-bin/title.cgi?60764

Some quotes just to make sure it is or isn't:

Two identical cell sections from two seemingly identical female piperlizards, the little insect-eaters that whistled so sweetly at night. The two lizards were identical, organ for organ. But made up of two different kinds of protoplasm. Just like the insects. Just like the landcrocs. Just like ever other organism on the planet he had studied which was sexually differentiated.

The stuff is more than an alien lifeform. It's a whole different concept of life itself. The teleplasm becomes aware of other lifeforms, on a cellular level, on an organic level. Like all organisms, it must compete for food and living space..............It takes the form of other organisms around it. It has the ability to imitate any lifeform, organ for organ. Now remember, the teleplasm is competing for food. How can it make an easy living?

There was no other way out. The teleplasm meant extinction for mankind. Other men had faced this decision before, with other lifeforms. Survey had a nice neutral term for it: 'Planetary Sterilization.' It had been done to Tau Ceti II. It had been done to Algol V. It had to be done to Lathrop III...........He pushed the button.

The third story is in that book as well. It's called "Neutral Ground". They do the astral projection thing with a drug of some kind. Nothing resembling the first story, maybe that story came from a different source.

Tell you what I'm going to do. I'll cut and paste that part of the question and ask it at a different board I frequent. Maybe we'll nail it down.

Making this an answer for better visibility.

The subterranean story is Hidden World by Stanton A. Coblentz. My copy is a paperback from the early 70s with a different cover than the one in the Wikipedia article, with one of the "land battleships" in the background and one of the subterranean ("chalk faces") warriors in the foreground. The plot is exactly as you describe. The publication history does list it as appearing in what sounds like a softcover collection. That should help you cross-reference with the stories the other answer identified, to find the exact collection you're looking for. 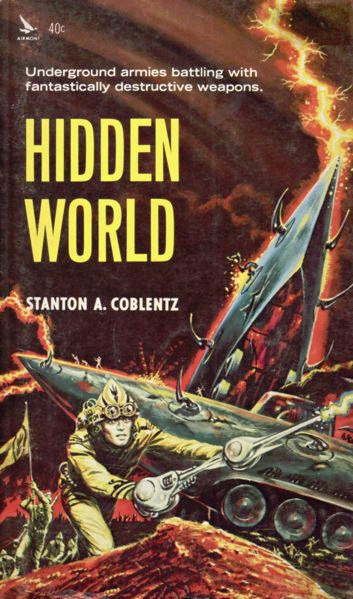