Fantasy novel in which protagonist battles against sorcerous empire with troops immune to pain?

I'm afraid I'm pretty light on details on this one, but here's what I can remember. The novel opens with a castle or other fortified area being over run by an enemy army. These enemy troops have been augmented by sorcery, in that they cannot feel pain of any sort. So, they ignore wounds and the like that are not immediately fatal. There may be additional magics involved, like enchanted weapons or the like, but I only recall the lack of pain element. I seem to remember the color white, here in a unfeeling, cold-hearted sense, being associated with the enemy army or empire.

The protagonist is a warrior from some small village (the novel was very run-of-the-mill and used a lot of the standard fantasy tropes). The enemy empire was run by wizards of a sort. I think the enemy empire's name was something like Khargish, or Kargan, but I can't be certain of that (Google has been no help here).

I don't recall much of the story, but the protagonist and his desperate comrades prevail. I do remember that, after the final battle, the hero and his surviving allies are so exhausted, they collapse on their bunks and sleep for hours. They've been up several days straight fighting. When they awake, local women come out to provide them with water to bathe. Many of the men are covered in gore, sweat, and dirt. There is a passage where the protagonist talks of the sensation of the water poured over his itching flesh, and how good it felt to get all the dried blood off of him. The local women offer to launder the warrior's gore-crusted clothes at the river. The protagonist agrees, except for the hand-woven cloak his village had given him before heading off to war. He feared they might damage the fine design on it or something.

I think this one came out in the 1980s. I remember that's when I picked it up in used book store. There may have been a dragon or other fantastic beast on the cover, but I cannot be certain of that. The author was not one of the big names that I was familiar with at that time- i.e. it wasn't Tolkien or John Varley or Terry Brooks, etc.

Could this be The Web of Wizardry by Juanita Coulson? The invaders are ruled by wizards, who enchanted their troops to feel no pain. The troops dress all in white. Our hero's land is called "Krantin"; maybe that's the K-word country you're remembering. The book is on the gritty and realistic side of things. It's quite possible the part about cleaning the blood off happens, though I don't specifically remember it. The hero definitely takes part in a siege and the fighting goes on for a long time- everyone is exhausted after. The hero has a cloak or shawl which shows his clan colors, which is important to him. The cover has a dragon, and it was published in the right timeframe. 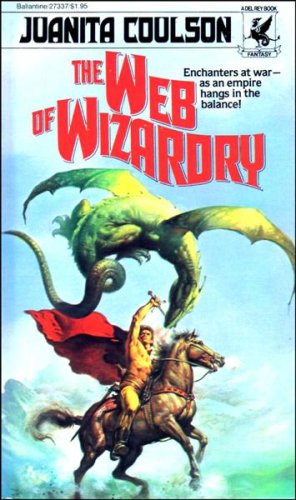 4
Fantasy Novel - Female Protagonist
8
Fantasy Novel with 'Legacy' in the title about an Elf trader
18
Barbarian captured by more advanced humans, physically enhanced, returned to people for a mission?
10
Fantasy novel - Female protagonist with one arm
11
A Novel with a female spaceship captain goes against her (empire?) moral codes in order to win the war
10
Fantasy novel with two dream-like worlds, one good and one bad
5
Story (novel) about immortal people who can turn into dragons
7
Fantasy comedy romance novel, set in medieval times, involving a siege, a nun, and enchanted pickles