Are there any other sentient species on Earth in the Star Trek universe?

I was wondering if:

The Voth are a sentient species that evolved from hadrosaur dinosaurs millions of years in Earth's past. They developed warp (and later transwarp!) technology, survived the extinction of the dinosaurs, and by the 24th century resided in enormous "city-ships" throughout the Delta Quadrant. They are among the most technologically advanced humanoid species encountered alive in Star Trek, having been warp-capable for at least 65 million years. They are featured exclusively in the Voyager episode "Distant Origin".

Interestingly, they fit both of your criteria: they are native to Earth, were newly discovered in the 24th century, and are a sentient evolution of a previously known species! However, they haven't actually lived on earth for millions of years.

The events of Star Trek IV imply that modern humpback whales are in fact sentient. First of all, some alien power clearly thought they were intelligent enough to bother sending a ship to talk with them. But even more telling is the fact that the whales seem to actually talk back. After the whales George and Gracie are brought to the 23rd century, they seem to hold a conversation with the probe in whalesong, with each party taking turns "speaking" until the probe decides to leave. Clearly a high degree of intelligence would be required in order to communicate with the makers of the probe.

Additionally, Spock clearly treats the whales as intelligent — he mind-melds with them, asks their permission to take them back to the 23rd century, and imputes some fairly complex opinions to them ("they like you very much, but they are not the hell your whales").

The Star Trek: The Next Generation Technical Manual (non-canon) also claims that "Takaya’s Whales" (not a real species) serve aboard the Enterprise-D and oversee the ship's compliment of Dolphins (see below).

While never explicitly stated in canon, it's implied throughout TNG that there are sentient dolphins which serve aboard the Enterprise-D. The show's creators clearly intended for this to be the case, as they are mentioned in The Star Trek: The Next Generation Technical Manual:

The Star Trek: The Next Generation Technical Manual indicates that the dolphins were part of the ship's complement, serving as navigational specialists. This would indicate that they are, in fact, a sentient species. 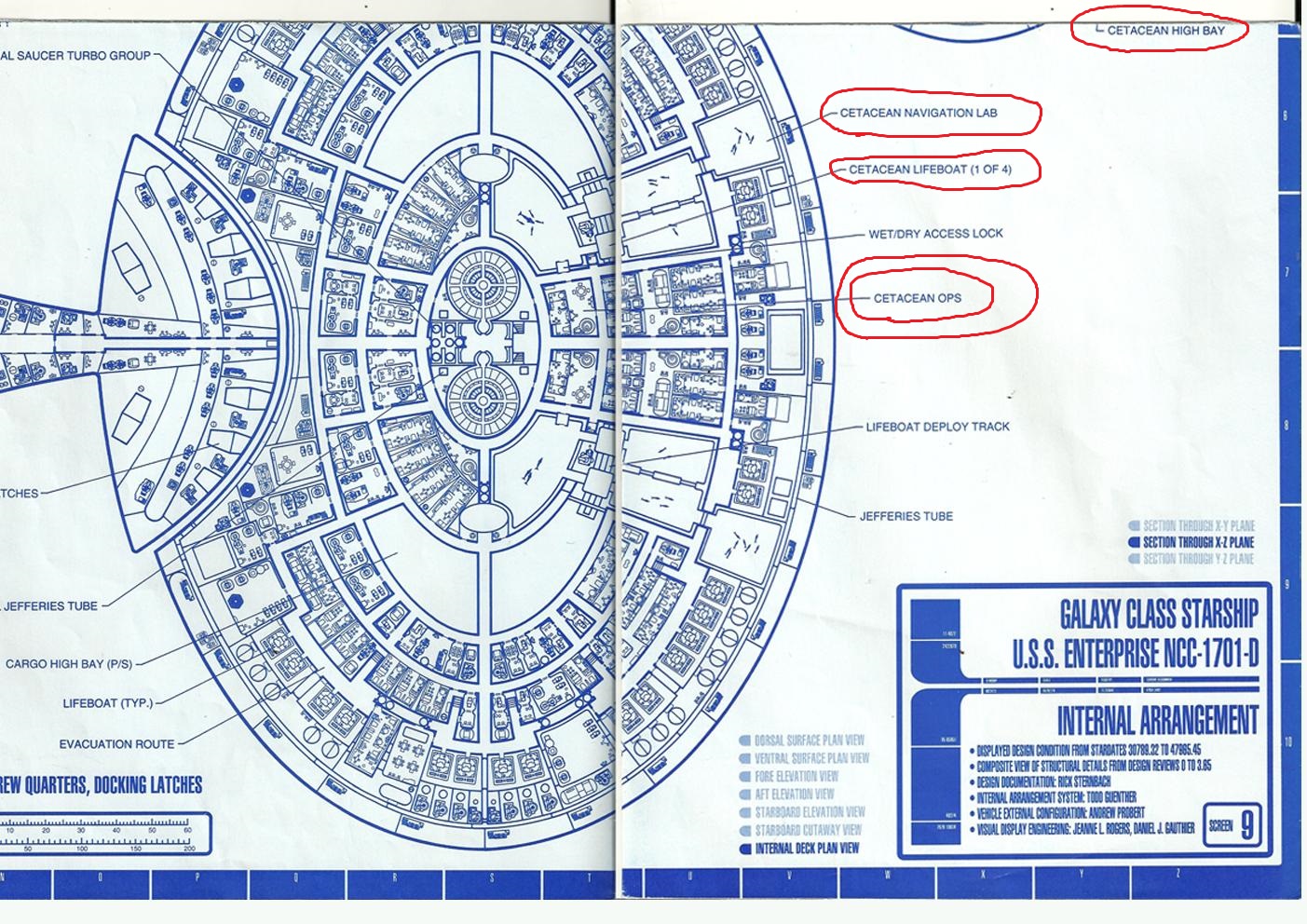 The closest we ever get to having this confirmed in the series is in "Yesterday's Enterprise" when reference is made to Cetacean Ops aboard the alternative timeline Enterprise.

EDIT: it has been called into question whether the actual line spoken in the episode is "report to cetacean ops" or "report to station ops." The episode transcript says "station" and the line is not present in the shooting script (not surprising considering it's background chatter). Having just watched the scene on Netflix, it sounds to me that "s" and "t" are clearly two separate consonants making it sound more like "cetacean", but closed captions do say "station."

In the episode "The Perfect Mate", Geordi asks a visiting Ferengi "have you had a chance to see the dolphins yet?" According to Rick Sternbach, this line was added because it was impractical to film actual dolphins:

According to Sternbach, the area was never shown on screen “since the expense would have been prohibitive but we did convince the writers to have Geordi [LaForge] ask a visiting official if they ever saw the dolphins.” The facility was his idea from the start. “I’m convinced,” he writes in the Manual, “that, even if they’re not intelligent enough to pilot a starship, they can still teach us a few things about other life forms.”

The comment "not intelligent enough to pilot a starship" might imply, however, that the Dolphins are not on the same level of sentience as humans. Alternatively, it could be interpreted as meaning that, due to lacking hands, Dolphins' sentience and intelligence are simply ill-suited to use technology designed for operation by humans.

Not sure if the alien in question is from Earth or not, but I was reading the PDF version of Star Trek titan book 1 and Captain Riker, who has always been very enlightened even for the 24th century, has a deck for the amphibious creatures to live. I think it was for a dolphin, but if it's an earth dolphin or not, I don't know.

16
Are the Xindi-Aquatic the only sentient water-breathing aliens in Star Trek?
18
Why do other races refer to us as humans?

15
Are there humanoid sentient species in Star Trek which eat other humanoid sentient species?
15
Are there any other changeling species in the Star Trek universe besides the Founders?
3
Why didn't the Vulcans play any active role in any series other than Enterprise?
5
Have any Federation member-species served in the Klingon Defence Force? If so, who was the first?
8
Star Trek: Into Darkness — How do Gaila and others like her attend the Academy on Earth?
9
Which Earth species are extinct in the Star Trek universe?
34
Are there any sentient plant species in Star Trek?