TV series episode where a stand-up comedian is forced to perform in Hell for all eternity?

I remember this one was an episode of some sort of horror or sci-fi-themed series. A comedian, who is a real jerkwad, ends up in Hell and is expected to perform his routine on stage in a club. I'm not sure if the comedian is aware at first if he's in Hell, or if he is aware, but thinks he's getting off easy by merely having to perform on stage.

When the comedian goes on stage, he begins his routine before a darkened audience. He lays out his best jokes and gags, but none of them are working. I seem to recall some of the sounds from the audience being inhuman in nature, as if they were by demons or other damned souls, etc.

In the very back is a figure puffing on a cigar. The figure is in total darkness, and only the glowing coal of the lit cigar is visible. I'm assuming this was supposed to be The Devil. The figure calls out to the comedian on stage and says "tell us about your mother." At which point the comedian, under prodding, begins to break down and recount the fate of his mother.

The comedian's ambitions and general callousness led to him being estranged from his mother, and he never had time for her when she needed him. The story begins to evoke murmurs of approval and chuckles from the unseen audience. The story comes to its bitter climax when the comedian reveals that she ran short of money, and couldn't pay her heating bills one winter. He wouldn't loan her money, and she froze to death in her apartment. The comedian breaks down in sobs, while the crowd is cheering and laughing wildly.

The story closes with the stage manager or the like telling the comedian he was a hit, and will be doing that routine again and again. The meaning being, the comedian's punishment will be the agonizing retelling of his role in his mother's death, again and agin, for all eternity.

This was a color TV episode. The vibe was a little reminiscent of a Night Gallery episode called "Hell's Bells" with John Astin, but I think this show wasn't as old as the NG series. It's not Tales From The Crypt, either. I remember it not being bloody/gory/full of nudity like a TFTC ep would be.

It's from Twilight Zone episode, and is called Take My Life...Please!

Billy finds himself in the afterlife, which resembles the backstage area of an extremely sleazy nightclub. His new agent, Max, explains he must go audition on stage, and that his performance will determine whether he goes to heaven or hell. A stage manager pushes him out onto a stage in front of a bored-looking audience.

When Billy tells conventional jokes, the audience grows hostile and they taunt him with remarks such as "tell us about how your mother died." In order to make the audience laugh, Billy must humiliate himself by recounting all the most shameful and degrading incidents of his life. This produces laughter from the audience. As he escapes the stage at the end of the set, traumatized by what he has had to reveal, he is told that his act is a massive hit...and that he must spend eternity exposing his shameful acts forever.

The comedian was played by Tim Thomerson. 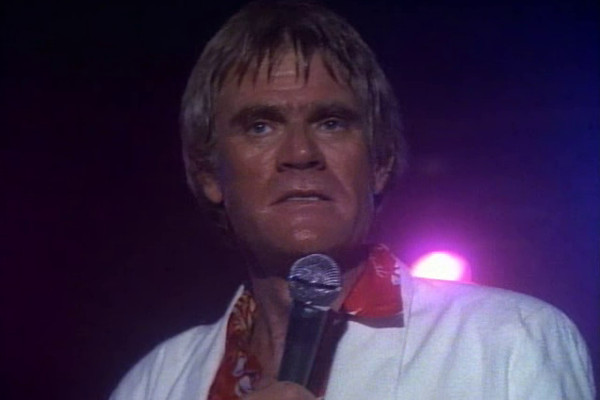