TV show where a condemned prisoner can miraculously heal by touch

Life on Death Row follows Eric, a young death row inmate (Patrick Swayze) whose final appeal on his verdict was rejected, and he’s slated for execution in 24 hours. After an accident in a desperate and failed escape attempt, Eric develops the amazing ability to heal people by touch – and his life take a whole new direction, just when there’s so little time before they are claimed by the hangman. 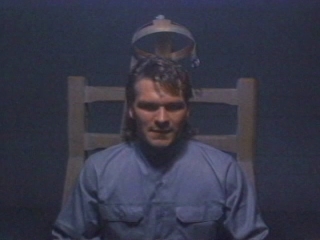 Additional notes from the SFF Planet site re: this episode relevant to the question:

The story bears many similarities to Stephen King’s acclaimed novel The Green Mile (and its 1999 big-screen adaptation directed by Frank Darabont), but the episode was broadcasted many years before King wrote his book – and perhaps it’s not a coincidence that in his post Amazing Stories career, Garris became a prolific writer and director of Stephen King adaptations in both cinema and television some (The Stand) successful, others less so.

2
Movie about a prisoner with healing powers

20
Show about a man who is held prisoner in a secret place where very peculiar things happen
7
Psychic girl who can read thoughts by touch!
5
90s Sci-Fi show - Prisoner made from parts of other people
12
Radio show where only drunks can see goblins
6
Book series set in space where a ship crashes whilst transporting a prisoner who can see in the dark
8
Film with giant tentacled red aliens which show up at sunrise/sunset, their touch is deadly
18
SciFi story where a man can miraculously alter things in real life by switching things between parallel dimensions
6
Story identification: Protagonist with headaches on planet where he can heal everyone