Trying to find a book about AI embedded in human brain

There was a book I read when I was younger, probably around 2000 at a guess. Its main character was a woman who I seem to remember had a photographic memory but I can't remember how that tied into the plot.

I can't remember much about what happened through most of the book but I think the twist was that the AI was evil and the baddy all along.

The front cover had a woman's head surrounded by metal tubes that may have been dipped in oil, so most of it was black. I thought it was called something like "Black Screen" but I've hunted far and wide and can't find it at all!

Anyone know the book?

A guess, with slim details from Wikipedia:

Silver Screen is a science fiction novel by Justina Robson, first published by Macmillan in 1999. It features Anjuli O'Connell, employed as a psychologist to monitor an Artificial Intelligence named 901. She has a photographic memory and perfect recall. The story concerns events following the death of Roy Croft, Anjuli's colleague and friend. The book's themes include machine rights and evolution. 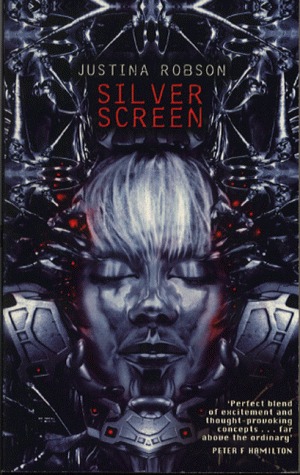 Not the answer you're looking for? Browse other questions tagged story-identification computers or ask your own question.