What kind of creature is Pac-Man?

In the Pac-Man series of video games, it is pretty obvious that the ghosts are, well, ghosts of some sort.

What kind of a creature is Pac-Man?

Is his nature ever explained in any of the games, instruction manuals for the games, or any secondary material (e.g. comics, interviews, press releases, etc.)?

A pizza with a slice missing

It is reported[1] that the creator of Pac-Man, Toru Iwatani:

...imagined something different, a video game that looked and felt like a cartoon. Inspiration struck, as it so often does, while he was eating a pizza. Noting that a pizza pie with one slice removed resembled an open-mouthed head, Iwatani had a vision: an animated pizza, racing through a maze and eating things with its absent-slice mouth. By any account, this is a bizarre vision, and it still packs a certain deranged wallop, even in the current animated-food era of Aqua Teen Hunger Force. (Animated food did indeed hit the video game world soon after, in Data East’s deeply weird 1982 release, Burger Time.) But we can be thankful for the technical limitations that forced Iwatani to abandon his pizza epiphany and recast his protagonist in the lemony hue we’ve come to know.
-Chris Green: Pac-Man, Salon (2002-06-18).

As videogame legend has it, Iwatani took his inspiration for the shape of the Pac-Man character from seeing a pizza with a slice missing. Pac-Man's form was dictated by punitative hardware limitations, which Iwatani used to his advantage in a move that was either a great insight or a marvelously lucky fluke: Pac-Man does not represent a physical, real-world being, he represents his primary function (eating).
-Character, pacmanmuseum.com.

This second one can be considered reputable as they tend to have interviewed Toru and may actually been the originators of this fact.

Pac-Man is a Pac-Person, a presumably biological species that lives on Pac-World (Or PacLand, as it's called in the 1982 Pac-Man TV Series): 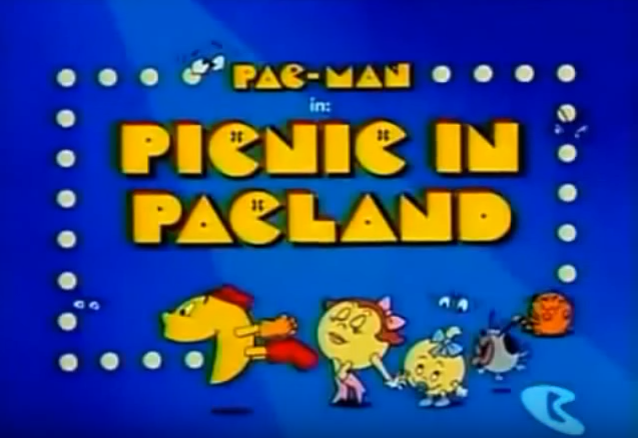 Likely, PacLand is a region or continent of Pac-World

His modern depiction has been around since Ms. Pac-Man arcade game and the original Pac-Man TV series, although it varies slightly from the cabinet art on the original arcade machine. 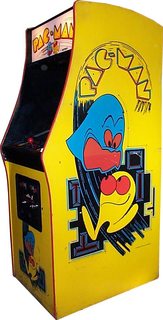 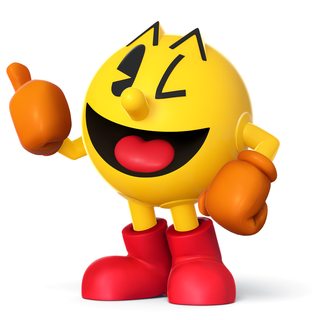 Left: 1980 Pac-Man arcade cabinet featuring a Pac-Man with legs, but no arms. Right: Pac-Man as featured in the latest Smash Bros. game, matching up with the more fully-featured and limbed version seen since 1982

Since 1982, when Ms. Pac-Man was originally released, we've known there are additional Pac-People, and the idea that they have arms, noses, and eyebrows came into play. 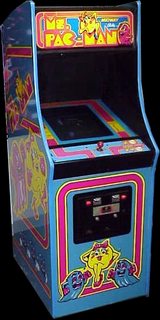 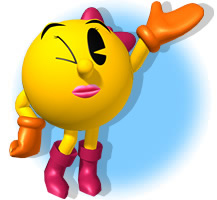 Original 1982 Ms. Pac-Man cabinet, showing the general design for yellow Pac-People that became here to stay, next to a closeup of related game art.

we've since also seen other family, such as additional children and uncles. (However, the newer TV show is set when Pac-Man was a teenager, so before his time with Ms. Pac-Man).

Some of his kind are known to grow hair: 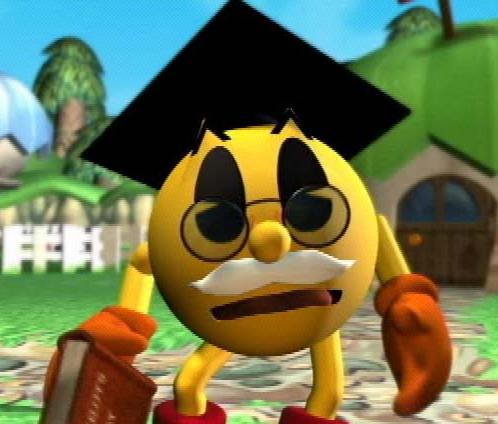 And although they appear biological, how they're "born" is unclear. The main evidence we have is that storks can deliver infants, but we don't know exactly where the infants come from: 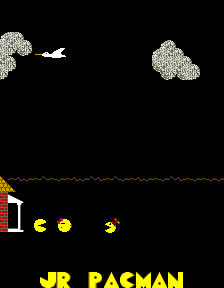 Another indicator that they're biological is that their big mouth and tongue are also used to eat more than just power pellets (or bonus fruit), as his species seems to be able to consume a wide variety of foods (and for pleasure, not just energy): 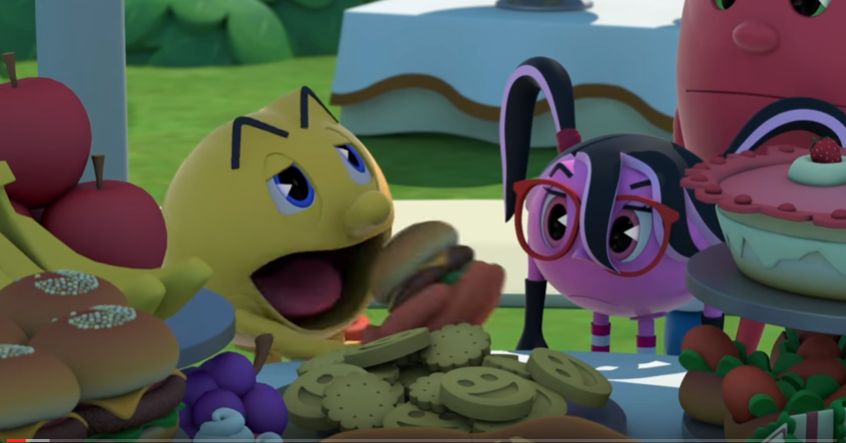 "I really should work on my self-control" - Pac-Man, immediately prior to eating a whole hamburger in one bite, followed by pretty much everything else on the table.

There are also Pac-People in a variety of colors and shapes, as seen in PAC-MAN: The Ghostly Adventures. 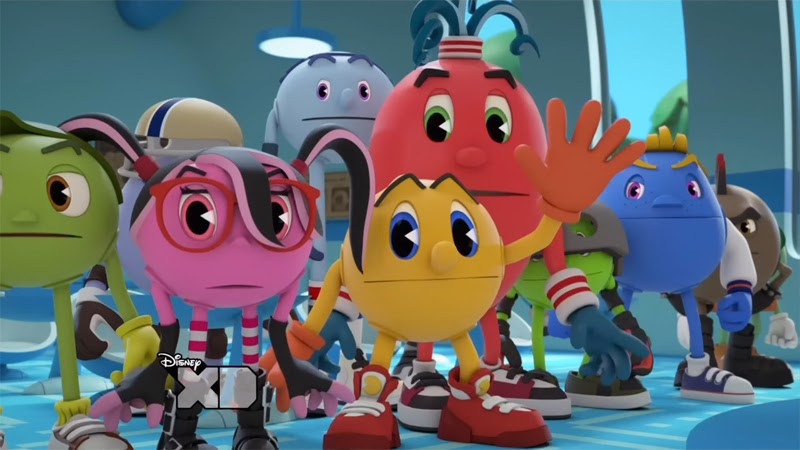 A note is that in the original TV series, all the Pacs we see are some sort of yellow color, even those in the final episode "Happy Pacs-Giving" (where Miles Pac-Man named Pac-Land). In the new series, yellow Pacs are considered rare. Additionally, as we see in that same Pacs-Giving episode, Pacs consume a variety of foods (as evidenced by their table full of a traditional "Pacs-Giving" dinner). 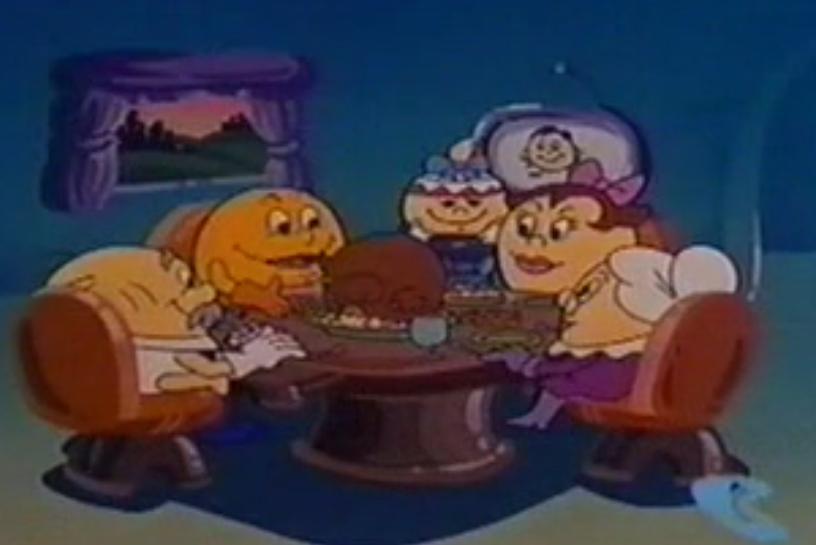 Not the answer you're looking for? Browse other questions tagged video-games pac-man or ask your own question.

17
What are the Elder Scrolls?
3
How does one become a Lantern (kind of)
3
The Amazing Spider Man 2 iOS game prologue cutscenes explained
5
What are Pajama Man's Superpowers?
2
PC game where you play a blind creature who perceives via echolocation
3
Crude 3d game that starts with you viewing souls, represented as stars in space, ends with man in a cage
8
What is Kool-Aid Man?