What was Vision doing in this scene?

In Captain America: Civil War, Vision keeps Wanda confined to the Avengers compound as requested by Tony Stark. Later, en route to join Captain America, Clint Barton (aka Hawkeye) picks Wanda up at the compound. But Cap probably already told him that Vision was watching her, so as a distraction, Clint set off some kind of explosion some distance away from the compound to get Vision to come out to investigate. This is the scene where the explosion happens and Vision is in the compound. 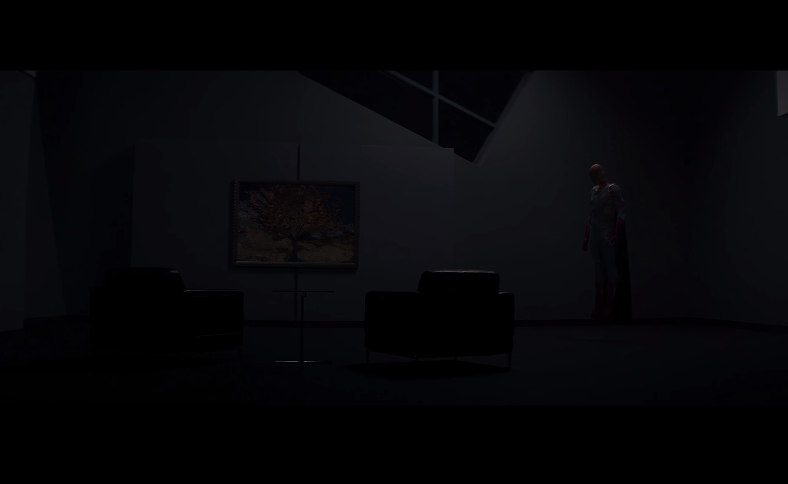 So my question is, what was Vision doing in this scene? He seems to be floating in mid-air, in the dark, in an empty room, doing nothing? This is obviously not the room where Wanda was, because as you can see in the next scene, he phases through the floor of the room where she is to join her.

This is clearly a different room, with what looks like a kitchen as well, whereas the room where Vision was in previously looked more like a sitting room on a lower level.

So if Vision was meant to watch Wanda, what was he doing on a different level of the compound, in the dark, just floating in mid-air?

My belief is that they're trying to emphasize his robotic nature, which helps contrast against his all-too-human desires regarding Wanda and how it drives his passion. Someone not moving conjures the idea of an inanimate object. Floating emphasizes his unworldliness. As regards him watching Wanda, presumably he was tapping into cameras in the facility, until he rose into her room to personally assure her. He could do that from any place, but by not being in the same room, he's ostensibly giving her privacy and space.

That said, this is my interpretation of how they set it up, versus any sort of answer with justification.

26
When did Spider-Man fight against the X-Men?
13
Was Hydra behind the events of the Avengers?
13
What was the fate of Hitler and the non-HYDRA Nazi party in the MCU?
28
Are S.H.I.E.L.D. agents (e.g. Clint Barton, Natasha Romanoff) ever referred to by their comics aliases?
10
Which MCU characters are shown to be worthy of Mjolnir in the comics?
14
Why is Clint not entranced by Wanda Maximoff in Age of Ultron?
34
What was Black Panther's ring doing?
5
As Goliath, did Clint Barton ever take advantage of his Hawkeye skills?
12
Is there an objective answer to who "the strongest Avenger" is?
23
In this drawing of the Avengers, who's the guy on the right?