Book about post-nuclear war in America

I read this book about 25 years ago and I can't remember the name. I remember a couple of "scenes", but that's about it. The main character was traveling around the US and interviewing people. One interview took place in (I believe) New York City. The guy being interviewed had a job of ripping copper out of abandoned skyscrapers for salvage. He had to wear a radiation suit and each suit had a Geiger counter in the boot (which they pretty much ignored).

In another part, the interviewer was riding in a small plane. I believe it was a woman flying and a young boy with a stopwatch was timing the flight. They were flying close to the ground and using the stopwatch to time obstacles they had to fly over.

That's about all I can remember, since I read the book when I was 12 or 13. Any help in identifying would be greatly appreciated.

Could it be Warday, a novel by Whitley Strieber and James Kunetka, first published in 1984? 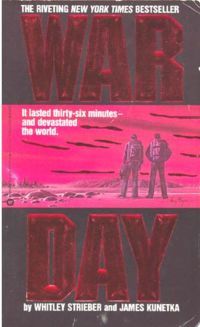 The unthinkable happened five years ago and now two writers have set out to find what's left of America.

New York, Washington D.C., San Antonio, and parts of the Central and Western states are gone, and famine, epidemics, border wars, and radiation diseases have devastated the countryside in between.

It was a "limited" nuclear war, just a 36-minute exchange of missiles that abruptly ended when the superpowers' communication systems broke down. But Warday destroyed much of civilization.

Whitley Strieber and James Kunetka, old friends and writers, take a dangerous odyssey across the former United States, sometimes hopeful that a new, peaceful world can be built over the old, sometimes despairing over the immense losses and embittered people they meet.

It's the right timeframe, after a nuclear exchange, and they're interviewing people while traveling across the United States. The one bit which keeps getting repeated in reviews is that California was largely untouched, and has become a walled police-state that doesn't allow the afflicted in and doesn't allow the healthy to leave.

The Google Books copy does seem to match some of your memories. There's a bit in New York City involving a man who's stripping copper wire in a radiation suit:

"Hey, Jenny," shouts a huge man in a filthy radiation suit, "who the hell... whatcha got here, tourists?"
"They're reporters. They want to do a story on the Big Apple."
"The core or the damn seeds?" He laughs. "You stick with me, you guys. You'll see a hell of a salvage. We're takin' out five tons of copper wire a day." He extends a huge hand as the train lurches off. "I'm Morgan Moore. I debuild buildings."

And there's the bit with the plane and the stopwatch:

Suddenly, the kid starts counting backwards from ten. He has a stopwatch in his hand, just visible in the dim light from the dashboard. At the count of one, Maggie guns the motor and pulls her stick into her belly. We shoot upward, all except my stomach, which remains hanging, sickeningly, at our previous altitude.
"Power lines," Maggie comments as we dive back to the altitude of my guts. I look at Jim. His eyes are wide.
"They're flying low," he mutters, "to avoid radar. Since they can't see, they're measuring ground speed against the stopwatch so they can tell when to climb over obstacles."

Not the answer you're looking for? Browse other questions tagged story-identification nuclear-weapons or ask your own question.