Why are there so few artifacts from the Goa'uld reign of Egypt?

As a time-travelling SG-1 sees firsthand in the two-part episode Moebius, Ra reigned in Ancient Egypt around 3000 B.C. During that time, Ra used Goa'uld technology, and the human resistance gathered hundreds of staff weapons and other Goa'uld technology to drive Ra away. 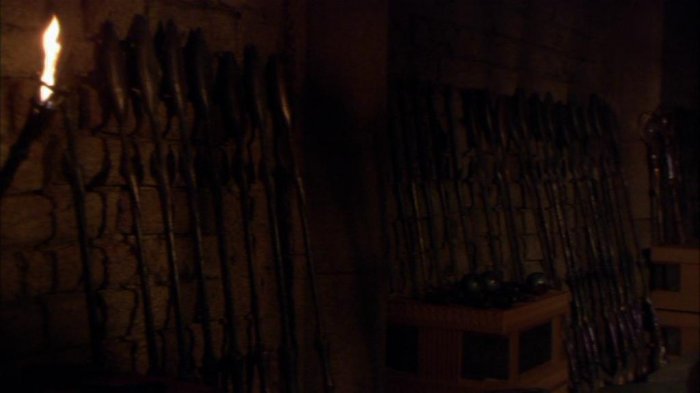 The novel Moebius Squared revisits this era and shows that three years after the rebellion, the humans did not destroy their staff weapons and zat guns, and they use them again.

Given this, why is it that so few artifacts from Goa'uld reign exist for modern archaeologists to find? All they found is the Stargate, the DHD that the Nazis eventually got a hold of, and a number of religious artifacts from Ra and other "gods". Why aren't they finding staff weapons, dead Jaffa armor, and other stuff from the Goa'uld reign?

The simplest answer would be five thousand years of being in the desert eroded them into dust/unidentifiable scraps of metal.

We do not know what they are actually made of but in the case of the armor at least since modern military rounds can penetrate it, it cannot be some sort of super alloy (although I am fairly confident that even a super alloy would erode away after enough time in a desert)

Jaffa Weapons and Armor According to this, which after a summary read through I can confirm is at least mostly accurate, Jaffa armor is made of Trinium, which is hundreds of times stronger than steel.

The seven metals of antiquity are gold, silver, copper, lead, iron, tin, and mercury. Archaeological and radiochemical dating suggest that human use of metals began in the period 6000 to 7000 Be. Thousands of metallic artifacts exist, some still in good repair after several millennia.

If iron can survive for millennia, I'm confidant that Trinium could.

The Ma'Tok staff weapon uses a liquid naquadah power source, naquadah being a much denser energy source than modern lithium-ion mediums, I'd assume any leakage could lead to catastrophic potential. In several episodes, liquid naquadah "batteries" are used as improvised explosives for moving through ship bulkheads, so any kind of damage wrought by erosion would likely destroy the weapon almost entirely.

As complete speculation, I'd assume the Ma'Tok staff and the Zat'Nik'Tel are both made of solid naquadah, as the Goa'uld are known to use that as interior hull for its energy conduction potential in their ships.

Naquadah forms the basis for many advanced technologies; the Stargates themselves are composed almost entirely of Naquadah.

To actually answer the question, so many smaller kingdoms to massive empires inhabited those regions throughout the millennia that even without environmental factors, religious beliefs would likely have led to the destruction of what early human civilizations considered "magic" or worse, proof of an enemy god.

The only canonically confirmed aliens to have visited Earth were, in this order: The Alterans(Either before or after the construction of Atlantis but definitely after the settlement of Dakara) The Goa'uld(From between, roughly, 8000 BCE to 3000 BCE) The Ohnes(an ancient race that is dedicated to fighting the Goa'uld throughout the galaxy) The Asgard(Who left no "Thor's Hammer" or anything like it, tech that they put on all of their "Protected" worlds) Martin's people(Who were Human as far as we know)

The Asgard MIGHT have removed any and all evidence of the Goa'uld, but why when every other world they did actually protect knew the Goa'uld as the Etens? Martin's people got to Earth, realized we were helpless and just kinda stayed.

26
Why did the Goa'uld not invade Earth through the Beta gate?
44
Why did the Tollan get wiped out?
18
Do Jaffa Staff Weapons Have an Escalating Effect?
9
Is there any specific canon info on where Goa'uld larvae come from?
5
Why do Goa'uld and Asgard continue to use names from Earth mythos?
12
Are any of the hieroglyphs, runes, etc. appearing in Stargate intelligible/meaningful?
10
Why don't the Goa'uld and Asgard know all the valid stargate addresses?
16
Why are there so few ancient ships in the Milky Way?
13
Why were humans better hosts than Unas to the Goa'uld?