Is Arya the real Arya, or is Arya being impersonated by The Waif?

Since being in the House of Black and White, Arya seems to be a little different. Sure, she traveled across the whole country and went to hell and back, but somehow after her battle in Braavos Arya had changed a lot of her behaviour:

One could assume that The Waif was victorious over Arya and is now impersonating Arya for a greater purpose.

Or did I miss the scene where The Waif finally gets killed? As far as I know the exact fighting scene is just the escape, followed by a "blackout fight" in the dorms where Arya sleeps.

Arya kills the waif in Episode 8 of Season 6.

Jaqen walking through the House of Black and White and finds a trail of blood. After following the trail he finds the Waifs face on the wall of faces.

The scene can be scene in the video below.

As for the rest of your points, I'll cover them one by one

1. Arya's new hairstyle is reflective of that of Ned in Season 1, similar to her dress style, it mimics Ned's outfit the last time she saw him 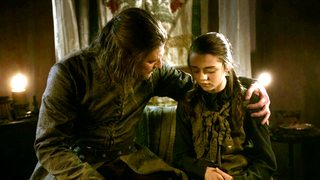 2. She was always left-handed. In this gif with Syrio Forel, we can see she's fighting with her left hand:

@Mat's Mug suggested that Nymeria's taking to Arya in S07E02 suggests the certainty that it was Arya. Nymeria would likely have munched anyone else's head off. As the Nymeria and her pack are known for attacking Men, as in ASoS Arya wargs into Nymeria attacking the Bloody Mummers.

In addition to the evidence mentioned above there are three more fairly strong bits of evidence:

Firstly there is her encounter with her dire wolf in the forest - it's unlikely the wolf would be fooled by a mask. It's also equally unlikely that the Waif would recognize the wolf. Not only does Arya recognize the wolf and call her by name but she then says "That's not you" in a clear reference to a conversation she'd had with her father many years previously and which again the Waif would not know.

Jaqen H'ghar: Finally a girl is no one.

Arya Stark: A girl is Arya Stark of Winterfell and I'm going home.

And finally the elimination of the perpetrators of the red wedding. That was very much something Arya Stark would do (especially the way she did it) but not something The Waif would do.

It seems much more likely that the changes you see are the result of the intensive training and experience that she has been through. The lessons from Jaqen were psychological as much as they were physical and they have changed her.

Since he watched Arya sneak into the room and find the letter, we haven't seen them together. Mayber Arya has killed LF and is now impersonating him to control Sansa... Probably not.

7
Why is Arya telling the truth instead of lying?

9
Why would Arya join the Faceless Men?
19
Why did Arya shortened her kill list so much in season 6? Or did she lie?
5
Did Tywin Lannister suspect Arya of being connected with the assassin?
7
What is the relationship between Arya,The Waif and Jaqen?
10
Why does the Waif believe Arya did not earn her coin?
29
Where did Arya get the face?
11
Hasn't the Waif followed the blind training?
7
Does Arya purposely lead the Waif into a trap?
12
How did Arya survive the stabbing?
8
What does the training of the faceless men contain?