I'm trying to find a book that I read years ago. I've forgotten the title and author, but it was about a girl named Julie. A new boy moved to town, I think his name was Cal, and all the girls had a crush on him. Julie was part of the "It Crowd" and the ringleader called dibs on Cal so there was all kinds of petty drama when Cal asked out Julie. Then of course Cal winds up being a crazy jealous stalker type and after a big showdown he wound up falling or jumping off a cliff. It was a very short book, kind of a middle-grade thing. I think it had either a girls face or a flower on the cover.

If there's witches involved, and the girl isn't named Julie, but Morgan, this could be the Sweep book series. Book 1, Book of Shadows

Morgan Rowlands is a high school student living in the picturesque town of Widow's Vale. Morgan is an ordinary girl who lives an ordinary life. However, her life becomes unsettled upon meeting Cal Blaire. With his angelic face, gold-colored eyes, perfect body, and olive skin, Cal quickly becomes the center of every girl’s admiration, this including Morgan and her best friend, Bree Warren, who breaks up with her boyfriend, Chris, and Raven (a girl who is popular because she wears heavy metal style and has tattoos).

Having gained popularity with his air of charisma and good looks, Cal manages to gather several dozen students from his new school to a “homecoming party”. During the party, Cal reveals his Wiccan origins by inviting his peers to join him in a circle to celebrate Mabon, one of the Wiccan Sabbaths. Feelings of discomfort and surprise cause many of the guests to leave, but Bree and Morgan decide to stay for the circle. From that moment on, Morgan begins showing a knack for Witchcraft, which sparks Cal's interest. However, as the chemistry between Cal and Morgan becomes more and more apparent a rift in Bree and Morgan’s friendship emerges because of the incident at the pool party when he picks Morgan up in his arms. Later, as the Samhain gathering comes to a close, Cal and his friends form a coven called Cirrus. During this circle, Morgan discovers that she is a "blood witch": a person who is naturally born with magical powers.

The cover does have a girl's face: 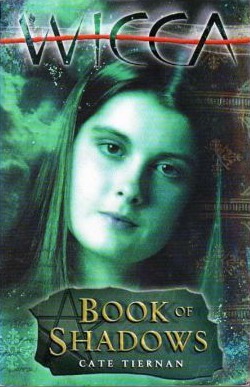 You might ask about the cliff aspect. The third book, Blood Witch, has Hunter, revealed to Seeker of the International Council of Witches, fighting Cal on a cliffside resulting in

Hunter placing a braigh - a spelled chain meant to hurt witches - on Cal so that he is helpless. Cal begs Morgan to save him, so Morgan throws the athame that Cal gave her for her birthday at Hunter, sending him over the edge of the cliff and into the river.

While Hunter doesn't seem to be a tremendously jealous sort, there are romantic sparks between him and Morgan, and it becomes a love triangle between Morgan, Cal, and Hunter.

Not the answer you're looking for? Browse other questions tagged story-identification novel horror or ask your own question.