Was there a comic where Batman and Robin were attached to a giant piano?

In the Batman: The Animated Series season 4 episode 19, Legends of the Dark Knight, there are scenes that are references to older incarnations of Batman (i.e. Miller's Dark Knight Returns, as well as a reference to the Joel Schumacher movies).

One of the stories involves a music heist and the Joker, where Batman and Robin are eventually tied to the strings of a very large piano. Was this in any of the comics or animated series? The artwork is very similar to the 60s.

This is likely a reference to the "The Devil's Fingers" & "The Dead Ringers" episodes of the live-action series in the 60s.

Famed pianist Chandell is in town to perform with Aunt Harriet, and while practicing at Wayne Manor three Scottish banshees rob the place. It turns out that the women are Chandell's assistants, helping him raise money to pay off his evil twin brother Harry. Commissioner Gordon calls Batman, but is dismayed to find that he's on vacation! During Chandell's performance, he uses a transmitter in his piano to set off a bomb in a nearby store, allowing his henchwomen to ransack it. Listening to the concert by radio, Bruce hears the off-key note and quickly calls Dick back into action.

Batman and Robin arrest Harry and turn him over to Commissioner Gordon for interrogation. But before they can crack him, he's rescued by sleazy lawyer Alfred Slye. Batman deduces that Chandell plans to marry Aunt Harriet and then bump off him and Dick, leaving him as sole heir to the Wayne fortune. But Harry and the women don't want Chandell to give up crime, so Harry kidnaps Harriet and holds her for ransom instead.

Batman and Robin are knocked unconscious by Harry's piano movers and tied up. They then put them on a large conveyor belt that leads into a huge piano roll machine. When Harry starts the machine, they start moving toward the inside of the machine, about to be perforated by the giant needles.

Additional hints to the origin are The Joker sending out clues as to his next heist and Batman ending the episode saying to Robin, "Well done, old chum" while giving him a handshake similar to that of the animated opening of the show. 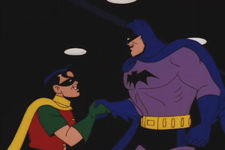 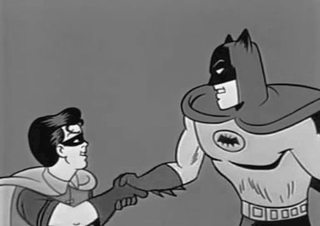 Not the answer you're looking for? Browse other questions tagged story-identification dc batman or ask your own question.

16
In comics does Batman have a rule against killing?
11
Who is the doll maker that helps Joker escape in Dark Knight Returns?
13
Did Batman use his cape to glide before The Dark Knight?
2
When does Batman get called the "Dark Knight"?
11
Which of these stories are in the same continuity as Batman: The Long Halloween?
12
What was Miller's intention for this scene of The Dark Knight Returns?
10
Does the Batmobile have a music player?
6
Has Batman ever unintentionally/accidentally killed someone?