What is the point of evasive maneuvers in Star Trek?

There are a number of tactical reasons why evasive maneuvers of starships provide an advantage during a battle. 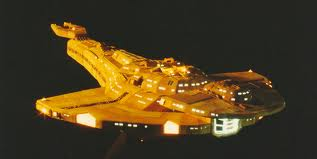 The Cardassian Galor class vessel is a good example. Technologically the Cardassians are a ways behind that of the Federation, however they make up for this in battle through numbers. The Cardassian society (Pre-Dominion War) was highly militaristic and had a much larger standing navy during peace time than the Federation. Their vessels have a primary disruptor weapon directly in front which can cause devastation to targets directly in front. They are nearly harmless when approaching from the aft section however as they do not have sophisticated weaponry at that location.

A good evasive maneuver against a Cardassian Galor style cruiser would be to try and get behind it or flank it.

Romulans have a similar style vessel with the War Bird, although they have significantly more weaponry than most other vessels. 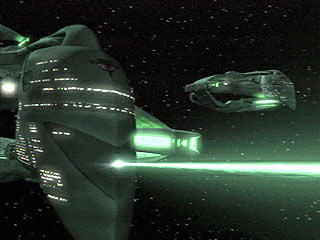 The Federation Galaxy Class ship has powerful phaser banks that give a much wider angle of attack making this a significant concern for many combatants. 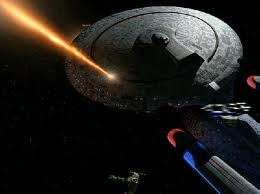 Avoiding exposure of weaknesses in shields, hull and warp nacelles

Deflector shields are not as powerful on all sides of the ship equally, and other exposed weaknesses like the port nacelles on the Galaxy class or Constitution class vessel leave certain vessels particularly vulnerable to specific attack patterns.

This was demonstrated in Star Trek Generations when a single Klingon Bird of Prey exhibited a surprise attack against the Enterprise-D, a Galaxy Class vessel, which should have more than outmatched the relatively tiny Bird of Prey. The vessel was incapacitated and later crash landed on the planet below.

Evasive manuevers are very important to avoid exposing your vulnerable components to the line of the fire of the enemy.

Evasive maneuvering in any form of combat is designed to promote your strengths and to exploit your enemies weaknesses. Nowhere is this more evident in the starship combat of the Star Trek Universe (STU).

Ship combat while resembling the World War Two warships of Earth (on which they were based) has other issues that must be addressed, one of the most important being the three-dimensional field of combat in space: 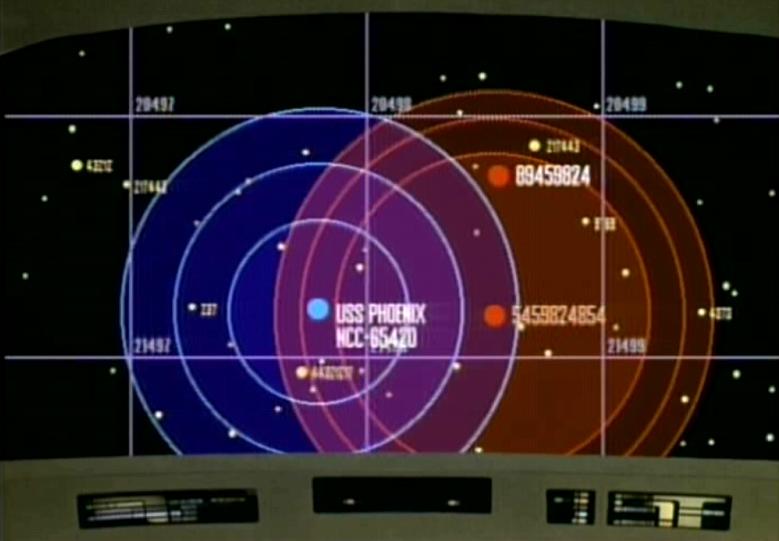 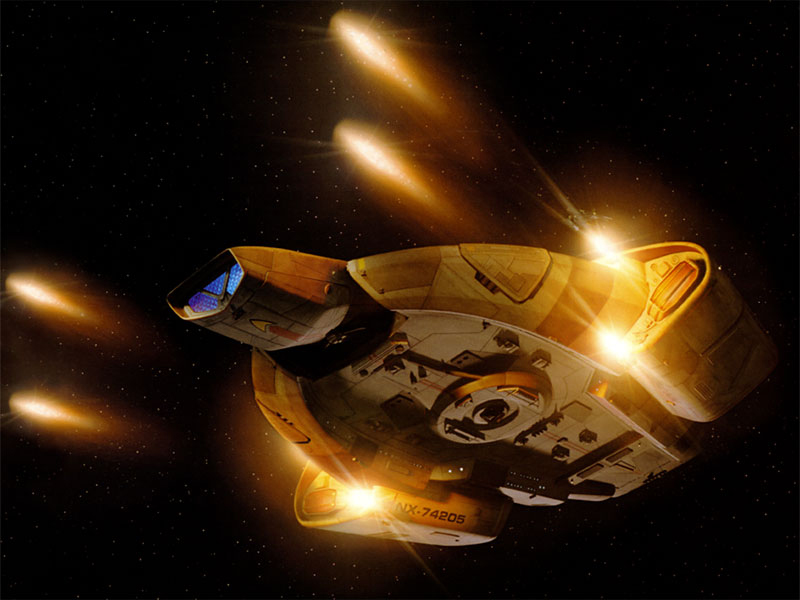 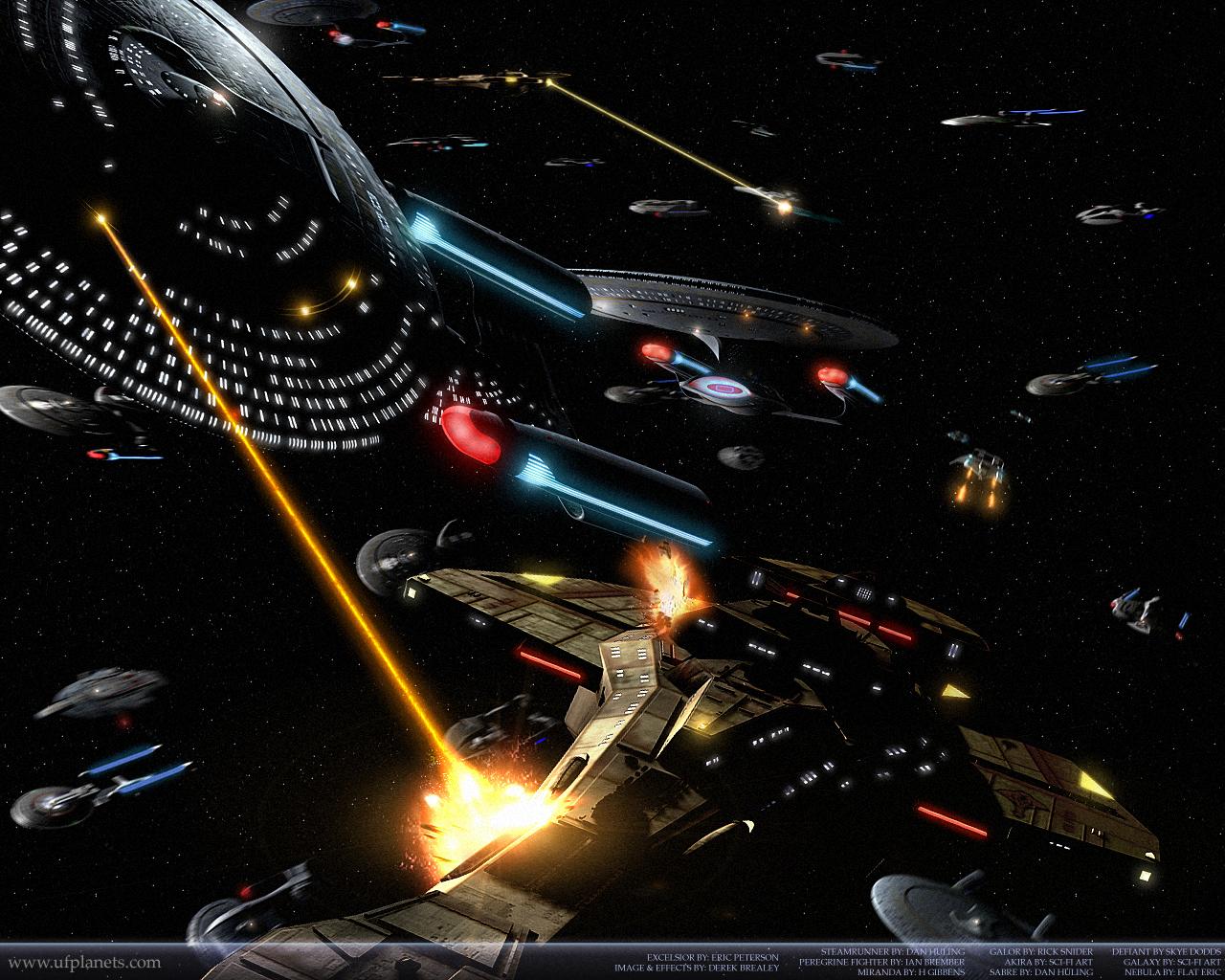 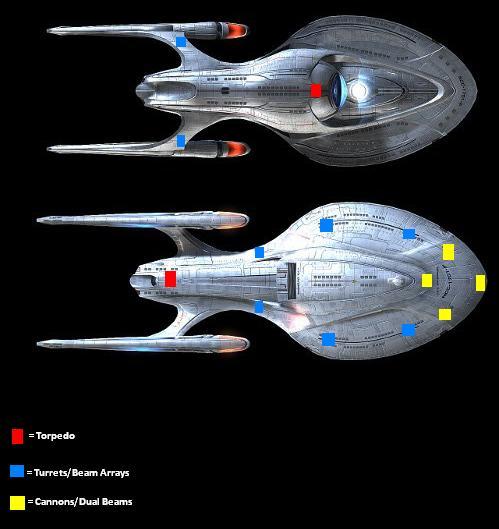 Not all weapons travel at light speed, and as such you can evade weaponry that you can see coming. The primary light-speed weaponry in the star trek universe are lasers, which have been largely abandoned for their issues with piercing a star ship's hull.

According to the Spaceflight Chronology, the invention of advanced ship-mounted laser weaponry was the key technology credited for the victory in the Earth-Romulan War. Laser weaponry was eventually abandoned by Starfleet because while it did penetrate deflector shielding easily, lasers had very little impact force to do actual damage to a hull compared to particle weapons. -- http://en.memory-alpha.org/wiki/Laser_cannon

Other directed energy weapons (primarily particle weapons as indicated in the quote) travel at sub-light speed, meaning their detection is possible before they land, and as such you can actively evade them even if their targeting is accurate.

Standard issue photon torpedoes have mass, so they exhibit inertia. When fired, you can try to avoid them, similarly to guided projectile weapons that are used today in air-to-air or surface-to-air combat.

In the void of space it would be difficult if not impossible to evade directed energy weapons. Simply put it would be like trying to dodge a flashlight beam. At best, you may be able avoid the beam's path by moving prior to it being turned on. The real question you should be asking is, 'How do these giant starships execute evasive maneuvers in the first place?'

It is established that Warp capable ships power is used to propel its forward movement. Impulse engines do so at far lesser speeds, but still forward. Maneuvering Thrusters move the ship in x,y, and z axis at even lesser speed. So how does a starship 'bank', 'loop' or come to a screeching halt in a vacuum? In a medium such as an atmosphere or liquid such maneuvers are more that possible. A starship just like any body in space has mass and the larger the mass, the more energy it would take to set said mass in motion with a greater amount to change its course.

Thing is whether a beam or projectile weapon, they would go in a straight line one slower than the other. At best, a starship in anticipation of a weapon firing could possibly speed up or slow their motion. Since there is no such thing as 'forward', 'back', 'up' or 'down' in space evasive maneuvers would work to either quickly get beyond the expected attack coordinate or slow down sufficiently in time to not be at the same point when it came.

If anything, interspace war would be more like fighting in a super 3D gravityless chess game where you could move in any direction in a straight line long as you could overcome your own inertia. Now before you say, 'Inertial Dampeners' remember that they are there to counter the effects of the sudden starts and stops from going to Warp or using the Impulse Engines. Which I always thought was odd since a ship 'traveling' in a Warp Bubble isn't actually moving. So since the dampeners aren't there to stop the ship's inertia but to negate the ship's interior inertia, how would a starship really execute evasive maneuvers?

Simple, since you can't bank in space you could stop, change directions or speed up. So the tough thing for both attacker and defender would be to anticipate both potential attack and defensive coordinates prior to an attack. It would resemble 'shotgun battleship' in that instead of picking a single point on a 3D grid, you'd pick multiple ones and fire on those points simultaneously. Of course that's provided your opponent's ship had sufficient power to stop and go on a relative dime. If they are going in a linear manner, then you'd just have to predict their intercept point and fire linearly.

Lastly, far as shielding goes it has been established that each section of a shield capable starship has one or more shield generators. Now, the Trek and SW version of shields asserts the projection is a 'plate-like' configuration. More than likely it would behave more like a magnetospheric shield and would be more bubble-like. So that implies that if you knock out one section, those still intact would continue to protect their area until significant power was lost.

I have to agree that with highly advanced computer systems which process information at transluminal speeds, it would be impossible to evade ship to ship weapons, unless the targeting was done manually. In fact, the computer should be able to execute firing sequences itself if it knows what it's targeting, and we've seen that SF computers can be utilized like that (from Voyager, the ECH commanded Voyager's computer to target the enemy vessel's engines).

Also, we do have examples of automated targeting being disabled where the tactical officers had to do manual targeting (which begs the question on why is the targeting system so easy to fail).

Plus, starships in Trek usually tend to go at about 0.25c of impulse speeds... faster velocities were noted without having relativistic effects though (which would likely make elaborate use of subspace fields). All ships tend to employ subspace fields for the purpose of lowering their mass... that's why large ships like the Sovereign and Galaxy classes are as nimble as fighters... plus I'm not sure we saw the full extent of their maneuvarebility.

Phasers and photon torpedoes can't really be too slow for the ranges they employ. The Nebula class had a maximum torpedo range of 300 000 km... phasers were limited to about half that range (or had a longer range). But that's for the Nebula class. The Galaxy class likely has a much larger range of it's main phasers... plus the Enterprise-D underwent upgrades to it's weapons to enhance the fire power and range.

If torpedoes can traverse 300 000km in 1 or 2 seconds... ships wouldn't have enough time to evade at 0.25C... they'd need to be roughly twice as fast (and its possible they are), and the evasive maneuvers would have to be executed by a computer. We saw on multiple occasions that in Trek, reaction times on behalf of the crew were critically low... whereas a computer was able to anticipate and react a lot faster.

SF never implemented it's automation to the maximum... or should I say, the writers never bothered to do it as they thought the organic beings wouldn't have anything else to do (which is not accurate).

But from what we know of Trek's capabilities, evading starsihps weapons is not useful in most situations, unless you manage to knock out the opponents automated targeting systems... and even then, you'd be hard pressed evading phasers that can travel at about 0.5 - 1c... or torpedoes that can do the same or better.

Wouldn't speed of light be an issue? Ships in space aren't exactly up close (but it would look boring on the big screen).

That means at extended distance even speed of light weapons would take several seconds to minutes to get to the target, and of course the target won't be where you saw it was since that ship 2 million km away is where that ship was about 5 seconds ago... Meaning evasive maneuver can fool prediction algorithms and not be where you think it ought to be...

By the way in one TNG Episode Captain Picard had the Picard maneuver which is designed to exploit the speed of light issue by making a very precise warp jump... making enemies think the ship is in 2 places at once.

14
Why doesn't the Enterprise ever hit an asteroid?
16
At what point and why does it become (almost) impossible to transport through shields in the Star Trek Universe?
32
Why did the shields behave this way in 'Star Trek Beyond'?
78
In Star Trek, why do Federation / Starfleet ships always seem to delay returning fire until it's almost too late?
7
What are all the forms of instantaneous galactic travel in the Star Trek Universe?
9
Why is time travel so rare in the Star Trek universe?
9
Are Vessels in Star Trek able to travel at speeds between 0.25x and 1.0x the speed of light?
11
Can TNG-era warp drive be used to travel at sublight speeds?