Why do the Cybermen coming through the rift move organically?

This question references S2E12 ("Army of Ghosts") and S2E13 ("Doomsday") of the modern series.

Refresher - the Torchwood institute is allowing 'ghosts' through a rift in dimensions they discovered. These ghosts stand around wavering, entrenching themselves in family life, like the long invasion in S8E4 (black cubes, the doctor stays for a year, weird nurses with cubes in their faces). The people assume these ghosts are humans, but it turns out they are cybermen, coming through the parallel dimension visited in season 2 episodes 5 and 6 ("Rise of the Cybermen" and "Age of Steel", respectively). For reference, here's a ghost:

and here's what it becomes: 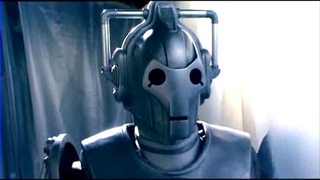 People around the world all assume these are the ghosts of their loved ones, partially due to intense belief that they are, and partially because that is propagated in the media. It's a good assumption too- the ghosts move organically, not mechanically by any stretch of the imagination. They don't even get into formation (as cybermen are so wont to do) until they are almost fully through. I get the flickering, but what's with the walking around? Why aren't the cybermen moving mechanically?

JACKIE: But these Cybermen, what've they got to do with the ghosts?

DOCTOR: Do you never listen? A footprint doesn't look like a boot.

JACKIE: Yeah, but they're human! You can see them. They look human.

ROSE: She's got a point. I mean, they're all sort of blurred, but they're definitely people.

DOCTOR: Maybe not. They're pressing themselves into the surface of the world. But a footprint doesn't look like a boot.

JACKIE: Guess who's coming to visit? You're just in time. He'll be here at ten past. Who do you think it is?

ROSE: No, I hate guessing. Just tell me.

JACKIE: It's your granddad. Granddad Prentice. He's on his way any minute, Right, cup of tea! (Jackie goes into the kitchen.)

DOCTOR: Tell me something new.

ROSE: Granddad Prentice, that's her dad. But he died, like, ten years ago. Oh, my God. She's lost it. Mum? What you just said about granddad.

For humans to project normal movement onto a perception of a shadow through the Rift is far less strange than to project identities of loved ones onto them! Jackie makes it clear that effort on her part leads to the perceptual shift:

ROSE: What makes you think it's granddad?

JACKIE: It just feels like him. There's that smell, those old cigarettes. Can't you smell it?