The wiki for A Song of Ice and Fire shows a list of dragon eggs. There is even a 'myth' that

Mushroom, a court fool during the reigns of Viserys I, Aegon II, Rhaenyra and Aegon III, claims in The Testimony of Mushroom that the dragon Vermax left a clutch of eggs somewhere in the crypts of Winterfell at the start of the Dance of the Dragons. However, there is no official record that Vermax ever laid a single egg, suggesting the dragon was male, and maesters feel that the wild claim of Mushroom is baseless, typical for his Testimony.

Why hasn't Daenerys tasked others to search for more dragon eggs?

Since you are looking for Books POV.

Eggs are all dead

In the Books, Daenerys is still in Meereen. She has not taken Dragonstone.

Meereen is in Essos and the only Dragons known to Essos were those of Valyria. Eventually, Doom of Valyria struck and Valyria was lost with all her dragons and dragon eggs. Targaryens, Celtigars and Velaryons escaped that fate however and legacy of Dragonlords continued in Dragonstone.

However, there were old eggs and dragon skeletons to be found all over Essos still. Remember, those Eggs were very old, some were contemporary of Old Valyria, some predated even that. The Eggs Daenerys received from Illyrio Mopatis were from Asshai by the Shadow and they were turned to Fossils by that time. Same would be the fate of most eggs in Essos.

It was Daenerys' one-time magical miracle that brought the dead eggs back to life with a roar. As GRRM has said, it was a one-time event, which will not happen again.

The birth of Dany's dragons was unique, magical, wonderous, a miracle. She is called The Unburnt because she walked into the flames and lived. But her brother sure as hell wasn't immune to that molten gold.

So it is unlikely Daenerys thinks that she could do it again.

Even if she does think she can do that again, Eggs are very expensive. Viserys could have bought an army with her Eggs, go figure. Eggs could be found in vaults of collectors but they would be loath to give them up without either financial or military persuasion.

"He had planned to take your dragon's eggs, until I warned him that I'd cut off his hand if he so much as touched them."

For a moment Dany was so shocked she had no words. "My eggs … but they're mine, Magister Illyrio gave them to me, a bride gift, why would Viserys want … they're only stones …"

"The same could be said of rubies and diamonds and fire opals, Princess … and dragon's eggs are rarer by far. Those traders he's been drinking with would sell their own manhoods for even one of those stones, and with all three Viserys could buy as many sellswords as he might need."
AGOT - Daenerys V

Daenerys doesn't have that much financial clout. She is currently in delicate negotiations with her neighbors to resume trade with her so that her people don't die hungry.

For Military clout, she indeed has that but she is preoccupied with certain affairs such as war with the entire Slaver's Bay. Essosi are wary of her and she will not make more friends by forcing people to give up their prized possessions for free.

Search more eggs, hatch them but to what end? As far as Daenerys is concerned, she is the only Dragonlord alive. She is the only one who can ride them. What good is an army of Dragons when there is no one there to utilize it? She herself needs only one dragon and can control only one dragon. She has no Dragonseeds like Rhaenyra Targaryen did to control the spare dragons. She has her bond only with Drogon, she doesn't control the other two. She won't be able to control any other while Drogon is alive and Drogon will not take any other rider while she is alive.

And what's to be gained from Fossil eggs anyways? She can get live eggs from her own dragons once they are old enough which will not need her to gamble her life by walking into a pyre. And since you requested clarification on her dragons gender:

What fools we were, who thought ourselves so wise! The error crept in from the translation. Dragons are neither male nor female, Barth saw the truth of that, but now one and now the other, as changeable as flame. The language misled us all for a thousand years. Daenerys is the one, born amidst salt and smoke. The dragons prove it.
AFFC - Samwell IV 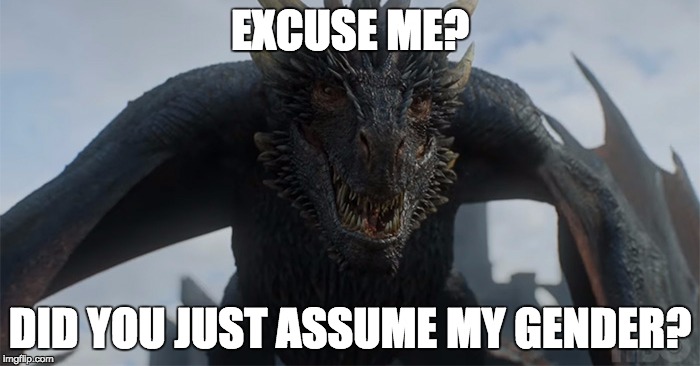 Only viable caches, where there are chances of finding live eggs are in Westeros, especially in Dragonstone. That's the place where last dragons lived and died and since it has been only approximately two centuries since the last dragon died, it can be expected that some alive eggs could be found there.

She doesn't have Dragonstone however. The usurper Tommen Baratheon does. Aerys II Targaryen, her father, had found a cache of of eggs deep inside Dragonstone although he failed to hatch them. Only some of them were fossils but rest were alive.

In the wake of Duskendale, the king also began to display signs of an ever-increasing obsession with dragonfire, similar to that which had haunted several of his forebears. Lord Darklyn would never have dared defy him if he had been a dragonrider, Aerys reasoned. His attempts to bring forth dragons from eggs found in the depths of Dragonstone (some so old that they had turned to stone) yielded naught, however.
TWOIAF - Dragons Kings: Aerys II

But some dragons tend to devour the young of other dragons so there is a fair chance that her own dragons would gobble the newborns up.

The largest and oldest of the wild dragons was the Cannibal, so named because he had been known to feed on the carcasses of dead dragons, and descend upon the hatcheries of Dragonstone to gorge himself on newborn hatchlings and eggs. Would-be dragontamers had made attempts to ride him a dozen times; his lair was littered with their bones.
The Princess and the Queen

Mushroom tells the most ludicrous tales which shouldn't be believed at once. He is the most incredible source.

He began by giving her kissing lessons, Mushroom claims. From there the prince went on to show his niece how best to touch a man to bring him pleasure—an exercise that sometimes involved Mushroom himself and his alleged enormous member. Daemon taught the girl to disrobe enticingly, suckled at her teats to make them more sensitive, and flew with her on dragonback to lonely rocks in Blackwater Bay, where they could disport naked unobserved and the princess could practice the art of pleasuring a man with her mouth.
The Rogue Prince

In any case, while his accounts about life in court and King's Landing can be given some consideration given that he used to live there, the same cannot be said about his tales on Dragons laying eggs in Winterfell. He has never been to Winterfell nor to Dragonstone.

Also see: Why are there no other Dragons than Dany's?

Not the answer you're looking for? Browse other questions tagged a-song-of-ice-and-fire dragons or ask your own question.

65
Is Daenerys Targaryen immune to fire?
39
Was Daenerys actually trying to hatch the eggs?
11
Why are there no other dragons in ASOIAF?
11
Why did the Targaryens choose Dragonstone after the visions of Daenys?

49
Did Daenerys' stillborn have dragon features?
37
Did Illyrio Mopatis know what he was doing when he offered dragon eggs to Daenerys as a wedding gift?
13
Why isn't Daenerys and Jorah's relationship affected by his slave trade?
9
Which dragons survived the Dance of the Dragons?
6
Why Daenerys isn't considered a witch by these people?
11
How does Varys explain his failure to save Rhaenys?
39
Was Daenerys actually trying to hatch the eggs?
8
What happened to all Targaryen's Dragon Eggs?