Harry's Quidditch team is never mentioned in the books. All we know is that it is not Puddlemere United, from this quote:

He handed her back the single sock he was supposed to be identifying, which was patterned with golden bulrushes.

"And that's not mine. I don't support Puddlemere United."

Harry Potter and the Deathly Hallows, Chapter 6, The Ghoul in Pajamas

Does he also support Chudley Cannons because Ron supports it? Ron also gifts him a book called "Flying with the Cannons". But it is implied that Chudley Cannons are not a very good team, finishing at the bottom of the table every year.

"...death is coming for me as surely as the Chudley Cannons will finish bottom of this year's league." —Albus Dumbledore

Was Harry still supporting the Cannons due to loyalty to his friend? Given that he is an excellent player himself, one would assume he would have other favourites. Is there any canon information on this?

There isn't much information, but probably the Chudley Cannons out of loyalty to Ron.

Harry gets a book from Ron on the Chudley Cannons from Ron as a Christmas present. He considered the book a good present, so he certainly doesn't dislike them.

“The rest of Harry’s Christmas presents were far more satisfactory. Hagrid had sent him a large tin of treacle fudge, which Harry decided to soften by the fire before eating; Ron had given him a book called Flying with the Cannons, a book of interesting facts about his favourite Quidditch team; and Hermione had bought him a luxury eagle-feather quill. Harry opened the last present to find a new, hand-knitted jumper from Mrs Weasley, and a large plum cake.” - *Harry Potter and the Chamber of Secrets, Chapter 12 (The Polyjuice Potion)

He rereads the book at the Dursleys' house, where Ron wouldn't be able to see him, so it's not out of politeness to Ron or an attempt to not hurt Ron's feelings.

“On the floor beside his bed a book lay open; he had been reading it before he fell asleep the previous night. The pictures in this book were all moving. Men in bright orange robes were zooming in and out of sight on broomsticks, throwing a red ball to each other. Harry walked over to this book, picked it up and watched one of the wizards score a spectacular goal by putting the ball through a fifty-foot-high hoop. Then he snapped the book shut. Even Quidditch – in Harry’s opinion, the best sport in the world – couldn’t distract him at the moment. He placed Flying with the Cannons on his bedside table, crossed to the window and drew back the curtains to survey the street below.” - *Harry Potter and the Goblet of Fire, Chapter 2 (The Scar)

In addition, he's read it ten times, so he clearly quite enjoyed the book. Harry doesn't usually have much time or desire for leisure reading, so for him to have read this specific book ten times proves he really loves it.

“It’s Christmas, Hermione,’ said Harry lazily; he was re-reading Flying with the Cannons for the tenth time in an armchair near the fire. Hermione looked severely over at him, too. ‘I’d have thought you’d be doing something constructive, Harry, even if you don’t want to learn your antidotes!’

‘Like what?’ Harry said, as he watched Joey Jenkins of the Cannons belt a Bludger towards a Ballycastle Bats Chaser.” - Harry Potter and the Goblet of Fire, Chapter 22 (The Unexpected Task)*

His favorite Quidditch team is almost certainly not the Tutshill Tornados.

The Tutshill Tornados are Cho Chang's favorite Quidditch team, and he talks about them with Cho multiple times, and although he has a crush on her and defends her support of them to Ron (who thinks she only supports them because they started winning and didn't truly like them) he never mentioned liking them himself. At the time he had a huge crush on Cho, and he was trying to connect with her and get him to like him, so if they had the same favorite Quidditch team it's almost certain that he would have mentioned it. It's very unlikely that he would have this in common with her and not say anything about it to her.

In the "Fantastic Beasts and Where to Find Them" textbook, Ron wrote "Chudley Cannons". Someone, probably Harry since it's Harry's book writes back "write a decent team in my book for a change Weasley". 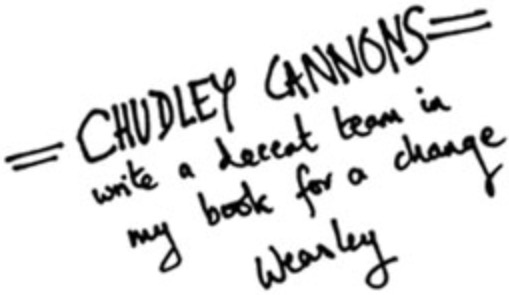 However, this doesn't mean that he might not still support the Chudley Cannons because Ron does. Harry may just be disappointed that his friend's, and his by proxy, favorite Quidditch team is rarely ever successful. In addition, he could be simply teasing Ron, like how Ron wrote "Harry loves Moaning Myrtle". Ron knows Harry doesn't, so he would have said that purely as a joke.

When he's in a serious relationship with Ginny he might switch to the Holyhead Harpies.

Ginny, Harry's girlfriend and future wife, supports the Holyhead Harpies. At some point, he might switch to supporting her favorite Quidditch team, instead of Ron's. His girlfriend (and later wife) might take precedence over his best friend in Quidditch team support. However, it's also possible that Harry might have grown to love the Chudley Cannons growing up supporting them with Ron, and not want to switch teams.

“Feeling nervous, Harry followed Ginny into her room. He had never been inside it before. It was small, but bright. There was a large poster of the wizarding band the Weird Sisters on one wall, and a picture of Gwenog Jones, Captain of the all-witch Quidditch team the Holyhead Harpies, on the other.” - Harry Potter and the Deathly Hallows, Chapter 7 (The Will of Albus Dumbledore)

In addition, he may have chosen his own favorite Quidditch team at some point.

As he learns more about the wizarding world, Harry may have chosen his own favorite Quidditch team, that may not be the same as any of his friends. Especially after his final fight with the Dark Lord, Harry would have a lot more time on his hands for doing things like watching Quidditch. Neither Ron or Ginny would likely take it personally if Harry doesn't share their favorite Quidditch team, as long as he isn't actively hating their teams.

He changed the team's robes on Ron's poster blue, which might imply his team wears blue.

Once Harry is allowed to legally do magic outside of Hogwarts, he turns the Chudley Cannons' robes blue. This could possibly be a reference to his own favorite Quidditch team, although it could also mean nothing. It could just mean Harry wanted to play a harmless joke with Ron's poster and blue is a very different color to orange, the color the Chudley Cannons wear.

“Harry also tried tying the laces of his trainers by magic (the resultant knot took several minutes to untie by hand) and, purely for the pleasure of it, turned the orange robes on Ron’s Chudley Cannons posters bright blue.” - Harry Potter and the Deathly Hallows, Chapter 7 (The Will of Albus Dumbledore)

If it is because his favorite team wears blue, there are three Quidditch teams that wear blue.

This northern English team was founded in 1612. Its robes are pale blue, emblazoned with a silver arrow.” - Quidditch Through the Ages

The Tornados wear sky-blue robes with a double ‘T’ in dark blue on the chest and back.” -Quidditch Through the Ages

None of these teams wear colors that work likely be described as "bright" blue though. The Appleby Arrows wear light blue, and there's nothing that contradicts or is further evidence for his possible support of them.

Puddlemere United wears navy blue, but Harry does tell Mrs. Weasley that he doesn't support Puddlemere United when she's questioning him about why he, Ron, and Hermione have to go off on a mission (their search for Horcruxes) and also asking him about a sock. She was yelling at him about him and his friends leaving, and he definitely wanted to make a quick escape from the situation, but he probably should have been easily able to tell her if it was his sock. It's possible that he panicked and he said he didn't support Puddlemere United because he was just in "deny mode" so he just instinctively denied everything she asked.

The Tutshill Tornados wear sky blue, and although he didn't support them earlier, they aren't entirely eliminated as a possibility. He almost certainly didn't support the Tutshill Tornados when he was still interested in Cho Chang, because he wouldn't have wanted to miss out on the opportunity to connect over a shared favorite Quidditch team, but it's possible that he came to like the team sometime after that, when he wouldn't have any pressing reason to mention supporting the Tornados.

21
Why was Harry so good at Quidditch?
31
Does it break a rule for a first year to play Quidditch for his/her house team, or is it simply tradition?
35
Was Harry good enough at Quidditch to play professionally?
4
Does Quidditch have breaks of play?
8
Does anyone express concerns about Quidditch?
18
Why didn't the Gryffindor Quidditch team have more senior players in Harry Potter and the Philosopher's Stone?
2
How is the team name order determined for House Quidditch games at Hogwarts?