Is there a backstory to (the sci-fi portion of) Carrera's Strax toy line?

The Strax toyline by Carrera1 (or at least a part of it) used to feature futuristic cars in a somewhat otherworldly setting with purple rocks and high-tech-looking buildings. (As an example for what I mean, look at the first and the third of the larger pictures in this blogpost (text only in German, but it's irrelevant to this question), the picture in this blogpost, the profile picture of this Facebook account, or the photos in this promotional booklet.) 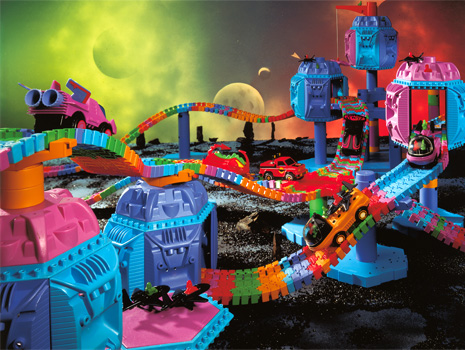 Was there any kind of an official backstory for this setting and the products presented in it? (I mean something that would (irrespective of whether or not users of the toys would invariably stick to it) answer questions like why are they driving around on that world? Do they belong to different factions? What is the significance of the rocks with faces? etc.)

1: It is surprisingly hard to add a link for this. The toy line seems to have been discontinued, so Carrera's official website does not mention it any more. There are various Ebay auctions of Strax toys, but some have already expired and have disappeared (only still visible in Google Images), and the same will happen to others, as well. Hence, stable links to images of these toys seem rare, although Google Images finds a fair amount.

Browse other questions tagged story-identification toys or ask your own question.

7
Short story involving assassination by toy
1
Was there a toy called “Harry Potter Concoction”?
11
Why did Hasbro's Combiner Wars Superion toy originally contain the Decepticon Dragstrip?
7
Why was this Onslaught toy sold as Red Skull?
9
Story whose final line is “Let there be light!”
3
Toy identification: Transformer knockoff - Big Blue Head
4
Galileo and the Far-Future Antigrav Toy
3
Cartoon where a little kid controls a huge robot which used to be small toy using glove