I just started watching The Defenders the other day; I'm pretty amped up about it after just finishing the third episode.

I didn't know how powerful Iron Fist was when he summons the iron fist until I began watching Iron Fist's series. So far from what I've seen it looks like the iron fist packs Saitama level strength as he can punch through a samurai sword and shatter it in pieces while sending the person who is wielding it airborne. Hell, in one episode he punched Luke Cage, who is literally harder than concrete, hard enough to make the guy flinch in pain as he when airborne.

But anyways I was wondering, is Iron Fist's fist strong enough to shatter adamantium? Say if he was to ever fight Wolverine and during the fight Wolverine tries to claw him but summons the iron fist before he does would he be able to shatter Wolverine's claws if he punches them on time like he did with the samurai sword? Or perhaps maybe just cause them to bend at least?

From the comics, we know that the Iron Fist's punch has it's limits. Specifically, it's not strong enough to break Captain America's shield: 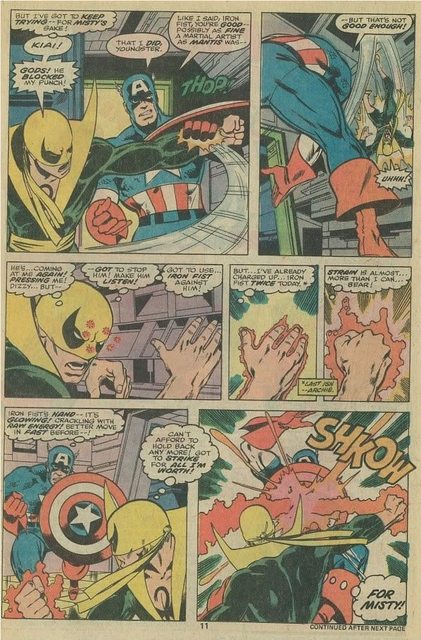 There's a nice "healthy" debate going over which is stronger: vibranium or adamantium, so it's not entirely clear if the Fist would have the same luck against Wolverine as Captain America. But both metals are very similar (adamantium is specifically an attempt to replicate vibranium) and both are stronger than just about any force on Earth -- and some not from Earth, like Thor's Hammer.

So, it's unlikely that Danny could shatter Wolverine's claws with his punch.

Not the answer you're looking for? Browse other questions tagged marvel marvel-cinematic-universe adamantium iron-fist or ask your own question.