Why don't the white walkers have archers in their armies?

In Season 7 episode 6 we see

Jon Snow and his posse trapped on a rock island, surrounded by the dead within throwing distance.

It seems like the entire situation could have been resolved by just having a few archers in the army. Surely in all the thousands that were killed and turned by the Night King, some were archers? Moreover archers are a staple of any army.

So why don't the dead have archers in their army?

The wights seemed to "use" their edged weapons by flailing them about whilst charging. From what I saw onscreen it looks like they achieved the cuts on the heroes accidentally, rather than deliberately.

I imagine arming and firing a bow is out of their motor control abilities.

I don't think the army of the dead has support personel making bows and arrows somewhere in some fortress. Think of the logistics of production, getting/bringing the material to them, etc. 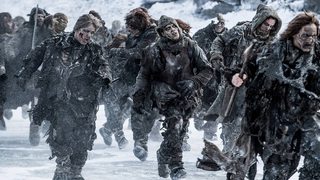 These are the undead minions of the White Walkers turned by them for their armies. If you want a common analogy for them they resemble zombies as in they are slow and have their power in numbers and regular means not being able to kill them. If you watch closely most of their kills are actually due to swarming a target where they claw, bite and maul it. They are not adapt fighters. As such it is very unlikely they would be able to use a bow. 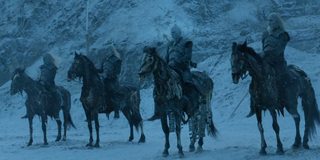 The commanders of the undead army, they seem very intelligent with thoughts of their own and are likely a species of their own. However, their weapons are actually made of ice and even though they are very good at manipulating the material I doubt they'll be able to form it into a bow string.

With that said we do see an example of the Night King using a ranged weapon, albeit a spear. He is also very accurate with it considering what he does with it too. 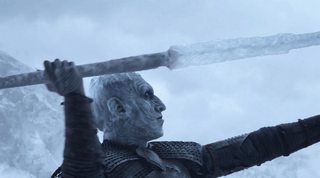 As for why they didn't use spears to kill the merry men? Well why waste resources on a group of people who are going to die anyway. They were surrounded and freezing to death with no food or supplies, it's likely the undead were just waiting for the inevitable.

There is however, the theory that the Night King lured the group North to get a dragon to come up so he could kill it and turn it. I personally do not buy into this but it is certainly possible until confirmed either way.

Another reason no archers attacked the party is that the Night's King wanted them alive and to send to Daenerys for help so that he could bring down dragons. And that actually worked. Some proof:

18
Why didn't Jon Snow bring any archers with him beyond the wall?

20
White Walkers and the cold
8
Do the White Walkers reanimate all their victims?
16
Why can't the Others go around the Wall at sea?
11
Why were the white walkers after Bran?
8
How do Craster's daughters know their sons become White Walkers?
8
How did the White Walkers get their weapons and armor?
21
Why was Lyanna Mormont named after Lyanna Stark?
76
Was the rescue in Episode 6 "Beyond the Wall" achieved in a plausible time?
5
If Cersei is pregnant, why can't you see it?