What is the story Picard is reading?

In the Star Trek: The Next Generation book Armageddon's Arrow, a character states that Picard has been reading a book - described thusly:

"The one with the aliens who crashed on Earth a long time ago..it's a big secret, and everybody's looking for them and worried that more aliens will come, but there are these people who are nice and who are trying to help them get away."

What book is Picard reading?

(while it sounds like it could be the plot to the DS9 episode Little Green Men, it seems unlikely that that event would be novelized and read by Picard to the character that is speaking.)

According to an interview with the author on his own site, Picard is reading a Star Trek book called Strangers from the Sky

“What the hell is that book Picard is reading to his kid?”

Ah. That. Well, it’s like this: there are a couple of places in the book where I refer to Captain Picard reading from a novel to his son, René, before bedtime.

(Oh, wait. Spoilers: Picard and Beverly Crusher are married, and have a kid, who’s four years old and change by this point in the ongoing Star Trek: The Next Generation post-TNG movies timeline. All of this happened a few years ago, spread across a handful of novels. So far, young René has not seen fit to demonstrate advanced intellect, mind control abilities or super powers, but the summer’s early yet. Stay tuned.)

Anyway, what’s the name of the book Daddy Picard is enjoying with his son? This one: 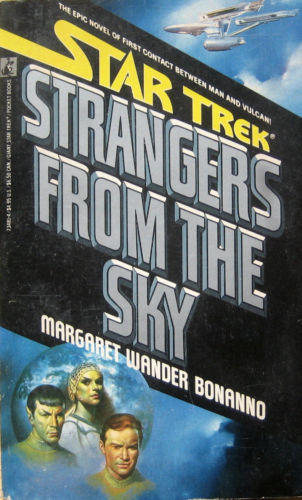 It also has an in-universe existence

Yes, I guess the secret’s kinda sorta out (again): the book referenced but never named is Strangers from the Sky. More accurately, it’s not the Star Trek novel written by the lovely Margaret Wander Bonanno, but rather the “novel within the novel,” which supposedly was written by “Doctor Garamet Jen-Saunor” and published in the late 23rd century (in the Star Trek “universe,” that is), and purports to be the “real story of Earth’s first encounter with Vulcans.”

Not the answer you're looking for? Browse other questions tagged story-identification star-trek or ask your own question.

16
If Shinzon were to replace Picard how is the age difference explained?
7
A book or short story about planet colonizing
9
Is it normal for Starfleet to provide replacement ships?
11
How did Picard send a binary message to Data in the future?
10
Star Trek: TNG novel identification assistance - plot uses Darmok-like communication
3
What is docelerite?
40
What changed William Shatner's mind on Star Trek?
21
Does the Klingon Empire use money?
12
Was Star Trek the first television series with a vegetarian character?