From this comment over at From how far away can White Walkers resurrect? by @JohnBell:

They aren't exactly "resurrected". The walkers (and the Night King in particular), are extremely practised wargs. They are warging into dead bodies. It kind of further bolsters the fan theory that the NK is actually Bran.

I was skeptical if this was true so went looking. I managed to dig up this reddit post and this asoiaf.westeros forum post but they are just some guy's theory.

But is there any evidence to suggest that the white walkers are wargs?

Difference between Skin-Changing and Warging

First of all, Warging is a specific type of Skin-Changing, exclusive to targeting canine family. If you are slipping into an organism which is neither a dog nor a wolf, it's not warging.

That being said, Others are still shrouded in mystery in the books. We do not know their powers' nature or extent of their powers.

Based on my own speculation rooted in the canon, I'd say the answer is no.

There is no instance of Skin-Changers possessing multiple skins simultaneously. So it is unlikely that a couple of Skin-Changing Others are inside hundreds of thousands of Wights.

It is more like reanimation with an evil spirit rather than actually slipping into the body of the dead men.

The Art of Necromancy animates the Wights, not Skin-Changing. As Melisandre, someone well-versed in Dark arts said:

Necromancy animates these wights, yet they are still only dead flesh. Steel and fire will serve for them. The ones you call the Others are something more.

But Melisandre has been proven wrong before about many things.

Varamyr had died nine times before. He had died once from a spear thrust, once with a bear's teeth in his throat, and once in a wash of blood as he brought forth a stillborn cub. He died his first death when he was only six, as his father's axe crashed through his skull. Even that had not been so agonizing as the fire in his guts, crackling along his wings, devouring him. When he tried to fly from it, his terror fanned the flames and made them burn hotter. One moment he had been soaring above the Wall, his eagle's eyes marking the movements of the men below. Then the flames had turned his heart into a blackened cinder and sent his spirit screaming back into his own skin, and for a little while he'd gone mad. Even the memory was enough to make him shudder.
ADWD-Prologue

Or how Bran feels blood in his mouth when his wolf hunts.

"They do," Bran said with sudden certainty. "They dream tree dreams. I dream of a tree sometimes. A weirwood, like the one in the godswood. It calls to me. The wolf dreams are better. I smell things, and sometimes I can taste the blood."
ACOK-Bran I

Or how Jon feels hunger felt by his wolf.

it was a hunger inside him, sharp as a dragonglass blade. A hunger... he could feel it. It was food he needed, prey, a red deer that stank of fear or a great elk proud and defiant. He needed to kill and fill his belly with fresh meat and hot dark blood. His mouth began to water with the thought.

It was a long moment before he understood what was happening. When he did, he bolted to his feet. “Ghost?” He turned toward the wood, and there he came, padding silently out of the green dusk, the breath coming warm and white from his open jaws. “Ghost!” he shouted, and the direwolf broke into a run.
A Storm Of Swords: Chapter 79

White Walkers, like all living things, feel pain. We saw it when Sam stabbed one, the White Shade screamed with pain.

Do it now. Stop crying and fight, you baby. Fight, craven. It was his father he heard, it was Alliser Thorne, it was his brother Dickon and the boy Rast. Craven, craven, craven. He giggled hysterically, wondering if they would make a wight of him, a huge fat white wight always tripping over its own dead feet. Do it, Sam. Was that Jon, now? Jon was dead. You can do it, you can, just do it. And then he was stumbling forward, falling more than running, really, closing his eyes and shoving the dagger blindly out before him with both hands. He heard a crack, like the sound ice makes when it breaks beneath a man's foot, and then a screech so shrill and sharp that he went staggering backward with his hands over his muffled ears, and fell hard on his arse.
ASOS: Samwell I

But we do not see White Walkers screaming when their minions are burned or hacked, which means they aren't feeling the pain felt by their skin, which in turn implies they aren't inside the dead skin at all. Or it could be just because their skin is dead, it feels no pain, therefore the Walkers feel no pain.

So Spake Martin...Er or didn't spake

So, I asked a bunch of questions that got an "excellent cheese" response from George, who was at least amused enough by our observation that he used cheese to change the subject that he went on to use cheese as the only subject change...

Since Author replied with Cheese, he refused to confirm it but he didn't rule it out either. So it may be possible that George has a similar idea about how their powers work.

So until His Grace GRRM decides to tell us more about it, we do not know for sure.

This was never answered from a show perspective so I'll answer what I've found from the show so far.

We don't know but it appears that the answer is no.

In the show we know of two wargs Bran Stark and Orell. When both of these warg their eyes go completely white: 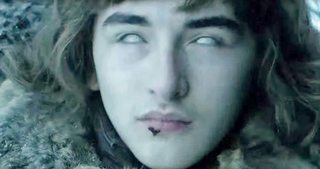 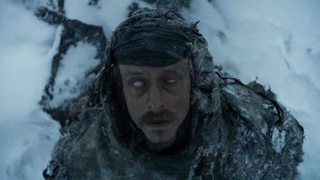 Compare that to the Night King at Hardhome, Season 5 Episode 8, when he raises all of the dead at once as Jon and co are leaving: 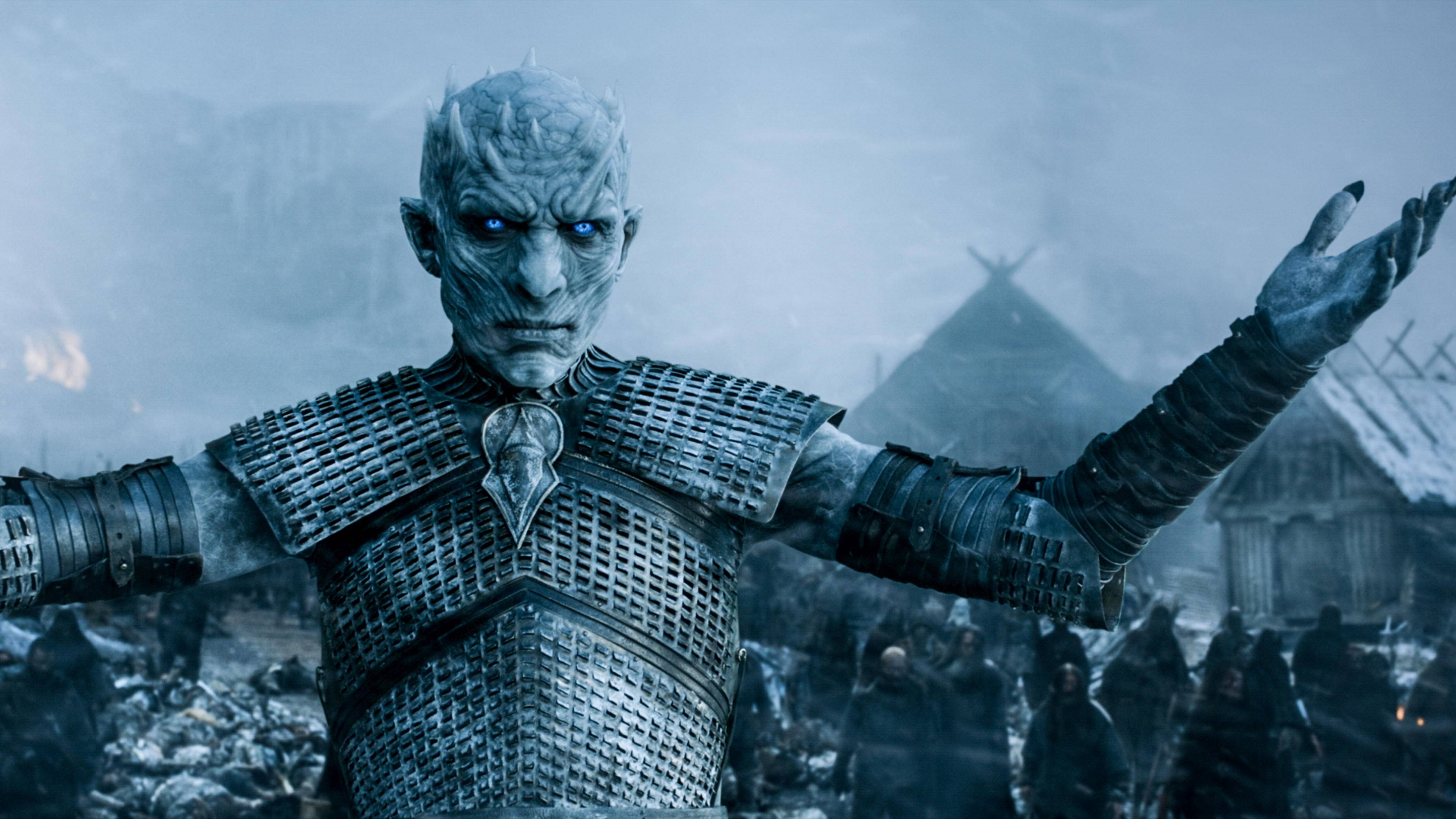 Not only are his eyes no where near a shade of white but they also don't change at all.

We also see that when either of these warg they seem to become completely immobile whilst doing so whereas the White Walkers are still free to move around. For example, see Bran warging into Hodor at the tower:

Something else that points to them not having this power is that the only wargs we see can only warg into one body at once. If the White Walkers are wargs they would have to be warging into 100s+ at once to be able to do so. And even though the magic appears to be different the Night King also turns Crasters baby boys into White Walkers:

The only evidence for them being wargs is that when a White Walker dies the wights it has turned also die:

When you killed the white walker, almost all the dead that followed it fell. Why?
Maybe he was the one who turned them.
Game of Thrones, Season 07 Episode 06, "Beyond the Wall"

And the scene where it happens here:

However, this doesn't seem to be strong evidence at all for them being wargs. Necromancy in games has a common theme that when the necromancer dies the wights/skeletons/dead it is controlling also die so this could be the same here.

It appears as though the distance the White Walkers were at, i.e. just beyond the Wall to Kings Landing shouldn't effect their ability to warg so the wight we see brought down could still be warged into.

Note that this question over on MTVSE also seems to assume that it is some form of necromancer spell not warging.

33
If Commander Mormont knew about Craster, why didn't he tell everyone that the White Walkers weren't gone?
13
What is the range of a Warg? (Distance of Warging)
8
Do the White Walkers reanimate all their victims?
38
Why do White Walkers wear clothes? Or why were they once (nearly) naked?
5
Does a Warg feel/taste what the animal does? Does the animal become essentially human?
7
Can wights swim in Game of Thrones / Song of Ice and Fire?
8
From how far away can White Walkers resurrect?
62
Why isn't everyone flabbergasted about Bran's "gift"?