Why didn't Obi-Wan use more Force powers when he fought General Grievous?

When Obi-Wan fought General Grievous on Utapau, during most of the fight, Grievous was constantly on the offensive. During that entire fight, Obi-Wan only used the Force to grab a gun, and to Force push Grievous away from him.

At several points in the fight (like when Grievous started spinning his sabers at the beginning), there were moments when it looked like Obi-Wan was in a position to use the Force to kill Grievous, either by choking him or sending him flying off the platform they were on.

Since Grievous is not Force-sensitive himself, and Obi-Wan had several key opportunities, why didn't Obi-Wan use more Force powers? 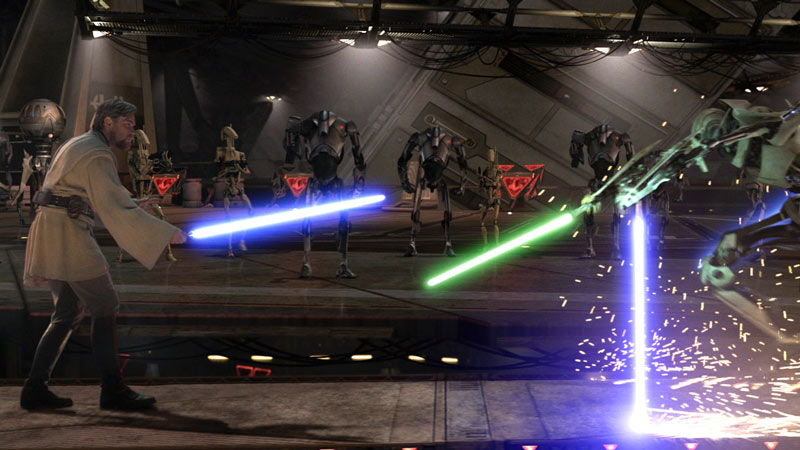 Obi-Wan uses a very defensive fighting style; look at any fight he participates in, and you'll see he's very rarely on the attack from the start. He'll wait for an opening and then strike, giving his opponent(s) every opportunity to surrender. He's the paragon of the Jedi method, if you will - rarely aiming to kill. That's also why he never uses such force powers as choke or lightning.

"A Jedi uses the force for knowledge and defense, never for attack." -Yoda

In the films, Jedi are rarely shown to use their powers while fighting. Battles between Jedi consist mostly of lightsaber dueling.

Although every film except Rogue One includes at least one lightsaber duel, we rarely see Jedi on either side using the Force itself as a weapon. When we do see a Jedi using the Force in an offensive way, it is usually from a distance while having a significant advantage and while not using a lightsaber.

This is enough evidence to conclude, at least as far as the films are concerned, that it is probably not practical to use Force powers offensively when engaged in a lightsaber duel. It seems reasonable to assume that lightsaber combat requires too much concentration for Jedi to use offensive abilities at the same time. Taking your attention away from your lightsaber long enough to use another power might give your opponent a momentary opportunity to attack (in the game Jedi Outcast, activating a Force power often left the user momentarily more vulnerable; if I remember correctly, one of the better strategies was baiting your opponent into using Force Push and then throwing your lightsaber through his torso as he activated Push).

While Grievous does not have the Force, he is wielding four lightsabers, which may be more than enough to require Obi-Wan's full concentration. It's also possible that Obi-Wan's thinking is more limited due to his training. Let's assume that Obi-Wan was trained that it is not safe to use the Force in an offensive way when saber-dueling another Jedi, because the momentary break in concentration will leave him open to attack. If this has been ingrained into him since he was a child, it might never even have occurred to him to use the Force itself against Grievous, even though Grievous would likely be more vulnerable than another Jedi.

Not the answer you're looking for? Browse other questions tagged star-wars the-force revenge-of-the-sith obi-wan-kenobi general-grievous or ask your own question.

21
Why don't Jedi (or Sith) use the Force to snap their foes' necks?

22
Why did Obi-Wan strike first against Vader?
16
Why didn't Obi-Wan use The Force?
19
Why did Obi-Wan lop off Ponda Baba's arm?
21
Why didn't the Jedi Council send a team of Jedi to go after General Grievous?
11
Why does General Grievous have blue and green lightsabers instead of a red lightsaber?
6
Why don't Force users always resort to telekinesis after they are disarmed?
0
Why does Obi-Wan choose the loudest possible transport (a yipping Varactyl) to sneak up on Grievous?
9
Fanfic where the Force sends Obi-Wan back in time and he saves Siri's life