I'm making a clock, and I've run into a stumbling block. There's guides all over the place for how to count in Klingon, but they only seem to go up to 10.

I know that 11 and 12 are wa'mah wa' and wa'mah cha' respectively, but I can't find any resource to actually show me how this 'mah construction would look in Klingon script (other than non-canon sources that just place a 1 and a 1 together to make 11).

What are the Klingon symbols for the numbers 11 and 12?

According to The Klingon Dictionary (written by Mark Okrand), Klingon numbers are formed in base ten in precisely the same way that they're portrayed in English. Eleven is 1(ten) and 1, Twelve is 1(ten) and 2.

In accordance with the more accepted practice, the Klingon Empire sometime back adopted a decimal number system, one based on ten. Though no one knows for sure, it is likely that this change was made more out of concern for understanding the scientific data of other civilizations than out of a spirit of cooperation

The following (analogue) clock was created by several members of the Klingon Language Institute. 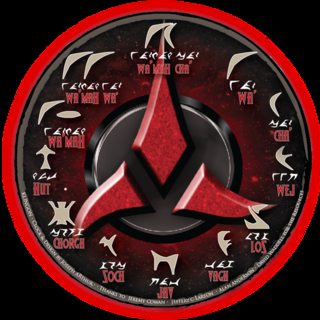 This page has a digital clock using Klingon numerals: http://www.klingonwiki.net/En/PIqaD

50
Kahless and Klingon Appearance
24
Why are the bridges of Klingon ships so steamy?
35
How honorably are Klingon scientists viewed by Klingon society?
24
What does the Klingon Empire Emblem represent?
9
What is the Klingon Onomotopoeia for laughing?
6
What is the Klingon equivalent of Starfleet?
6
Are the Klingon gods in Stovokor?
33
What exactly *were* the Klingon gods?
2
Could a starship's impulse engine reactor produce enough energy to power the warp drive?
18
How come there are no middle-aged senior officers on the Enterprise D other than Picard?