Lately there is this one thing that has been bugging me, that I can't seem to find a clear answer to.

But now in this new trilogy that James Cameron is planning, the idea is that the T-800 design itself was molded or designed after a human, Chief Master Sergeant William Candy (played by Arnold), which is seen in deleted clips from Terminator 3. And since he was a big bulky guy, it makes sense that other models also needs to be big, like Franco indeed is.

If the T-800 series itself was designed after William Candy, why is he model 101?

This has been bugging me, because I always thought to myself that there was a model 42, and a model 98 and so on, model 101 just happened to look like Arnold, and maybe he was "closest to the door" when Skynet decided to send a Terminator back in time to kill Sarah.

I always assumed the deleted scene you mentioned was just a joke and was never meant to be included in the film except as an extra, however if it was not a joke the T-800 model 101 was already called such in the first 2 films when judgement day occurred in 1997 instead of 2003 which would indicate that initially the terminators were not designed around one William Candy (unless the military had been experimenting with robots for a long time and they really sucked at it) temporal mechanics class always kicks me in the canons.

not sure how canonical it is but here goes

Actually there is a T-1 series. It is shown in the Terminator 3 movie. 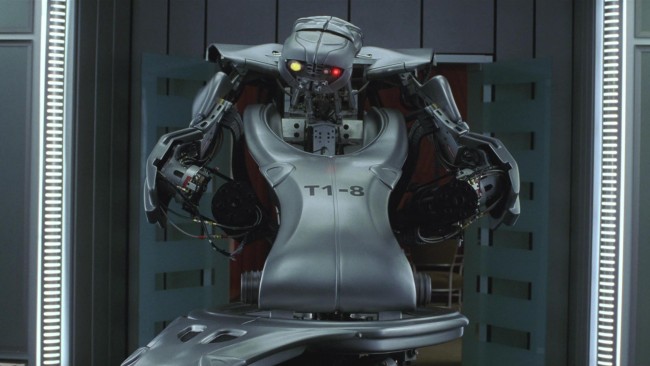 Well the thing with the skin is that, the T-800 model was the first succesful attempt of Skynets infiltration Terminators. The T-600 and the T-700 models had of course the option of tissue cover, but it lacked the ideal proportions that the T-800 had, so they were used mainly as combat units at the time of the war of the machines. The timline is convoluted and messy in this movies, couse we see in the Terminator 2 that the first works on the Terminator was around the humanoidal type, not this strange tank thing. But if we include the "Seargent Candy" cut off scene, it makes more sense

Not the answer you're looking for? Browse other questions tagged the-terminator the-terminator-series skynet or ask your own question.

30
Why is the “Arnold Schwarzenegger” terminator referred to by two different product numbers (T-101, T-800)?

25
How does the T-1000 see?
24
How could a Terminator ride a vehicle that was made to support the weight of a human?
36
What does a Terminator do after its mission is accomplished?
7
What model is the “Future Terminator” in The Terminator?
5
What does John Connor grab between his two fingers when touching the T-101 in Terminator 2 Judgement Day?
41
Why does the Terminator—an infiltration machine—steal clothes by attacking humans anyway?
21
How did the Resistance manage to win the war and destroy Skynet in the future?
20
Why does every T-800 Terminator sent back look like this?
26
Where did the name “T-800” come from?