Where were these characters during their conversation?

Bronn and Jaime on the battlements of some castle/walled city looking at the ranks of Unsullied and then Dothraki cavalry.

Where were they? I thought that:

Dany decided not to send the Unsullied and Dothraki to King's Landing.

Very soon afterwards these two characters are then seen in

This is confirmed with Cersei and Jaime's conversation later on:

Cersei: How many dragons did you see at the pit?

Cersei: What happened to the third?

Jaime: For all we know, it's guarding her fleet!

Cersei: She came here with her dragons and her Dothraki and her Unsullied. She came here to show us all her power.
Season 7 Episode 7 - The Dragon and the Wolf

It's evident that it is King's Landing from the surroundings alone: 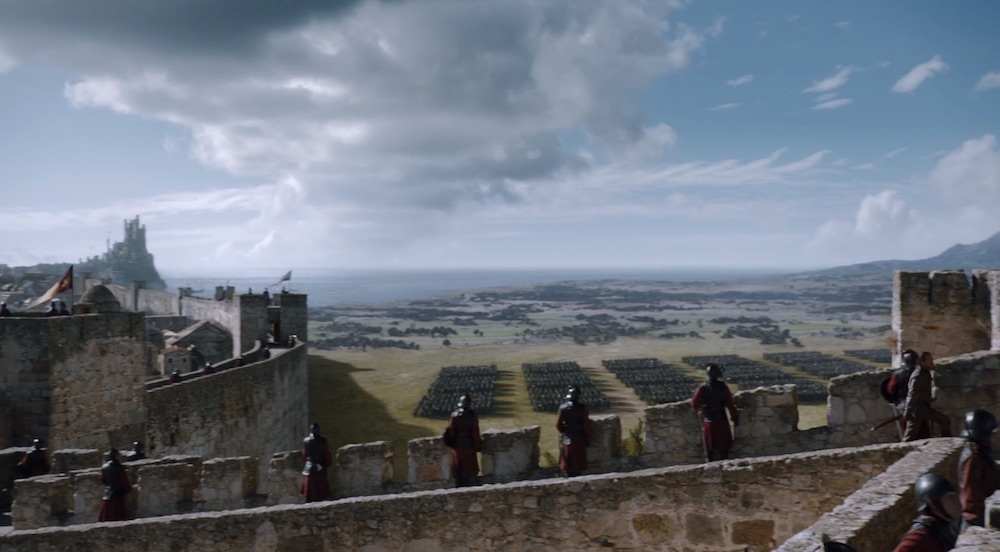 You can see the Red Keep on far-left Corner, atop Aegon's High Hill. The Unsullied are holding positions outside the city. So it's evident that it's King's Landing.

Later Cersei and Qyburn have this conversation:

CERSEI: Why isn't she with them?

QYBURN: I'm afraid I don't know, Your Grace. No one has seen her.

CERSEI: And the rest of them?

QYBURN: They're on their way to the Dragonpit now.

Dragonpit is in King's Landing, on Rhaenys' Hill.

Later when Tyrion goes to meet Cersei alone, he meets her in their Father's old office, in Tower of the Hand, inside Redkeep.

Others have explained where it is. You said you didn't think that was the place:

Dany decided not to send the Unsullied and Dothraki to King's Landing.

This is true, but then

You should also realize that what you're seeing is months later. Conditions changed, so her decision changed. It seems like less of a time, because comparatively little was shown happening in between. But there's been something like a month or so between most episodes this year.

One episode, Jon Snow is practically dead. The next he's up and moving without issue. One episode, the Unsullied are on the east side of the land with Daenerys. Then they're on the other side, with ships. Then they're back on the same side at King's Landing.

Those things take months. It's not like our world where you can hop on a plane and be on the other side of the planet tomorrow. But in story terms, they go directly from one place to another and skip the travel between.

6
Why do the Thenn have these lines on their heads?
7
Is there a meaning behind Stark characters losing their wolves?
9
Why would Dany enter into an alliance with these characters?
3
Where did the Tyrells' loyalty lie during Robert's Rebellion?
15
Who are these Game of Thrones “Summer is here” characters?
11
Is there any official mention of the show changing the dates in the show to AL from AC?
56
Why didn't Daenerys' advisers suggest assassinating Cersei?
5
If Cersei is pregnant, why can't you see it?
32
Which noble houses were destroyed during the Game of Thrones?