Looking for a short story about a ghoul woman

I read this story in an anthology in a school library sometime around 2000-2007. I don't remember the author, title of the story, or the title of the anthology, unfortunately. Description following is a bit gory. It was probably not newly published, due to the school's financial situation at the time--there were a lot of old/out of print books on the shelves and relatively few new releases

It was about a ghoul woman who looked like a living person and could pass as such. The story involved her escaping her grave, then essentially just looking around for dead bodies to eat. At one point she fell down a cliff, then had some difficulty getting herself back together as she'd broken her arm, though this was framed as an inconvenience rather than a source of pain. She eventually gets a job at a morgue, and there are various descriptions about how different types of death result in different quality meals (e.g., she mentions that drowning victims taste "spongey").

Turns out another employee is also a ghoul, and he reprimands her for eating at work and tries to get rid of her. She calls the police screaming, saying that her boss said he was going to kill her and put her in a specific drawer in the morgue. She hides herself there after intentionally reopening her injuries and playing dead, so when the police come, they find her just as described and arrest the other employee. They pull him out while he screams how they need to entomb her in stone instead of giving her a pauper's grave.

Does anyone know this story?

I believe you are looking for "Disturb Not My Slumbering Fair", a 1978 macabre tale by Chelsea Quinn Yarbro. I first encountered it in the Asimov collection, Young Monsters, but it's appeared in several collections: 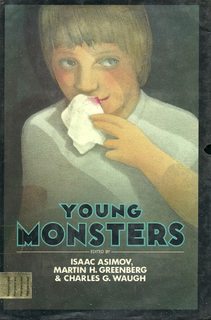 You can find a summary here, at a review of Cautionary Tales:

This story is original to the anthology, and the following author’s note draws parallels between it and Yarbro’s first Saint-German novel, Hôtel Transylvania, “which develops along similar lines”. The story is about Dierdre, a young female ghoul, who escapes form [sic] her grave and goes on the hunt for flesh to eat. She brutally murders a night watchman, and then a young woman – albeit chiefly to provide a body for her own empty grave – before getting a job at a morgue, where she can snack to her heart’s content on cadavers.

Not the answer you're looking for? Browse other questions tagged story-identification short-stories horror undead or ask your own question.