Is the Golden Company considered Westerosi in Westeros?

A few of the characters mentioned "the foreign invaders" when referring to the Unsullied and the Dothraki. However, the same doesn't seem to apply to the Golden Company. I know a bit about the history, but I imagined they would recruit a lot in Essos. How come they're not considered foreign?

They are comprised mostly of Westerosi exiles and bastards, and so would fit the 'Westerosi' description

Ok, so, in general, there are a fair amount of differences between the A Song of Ice and Fire and the Game of Thrones canon. However, the history and foundation of the Golden Company seems to be the same in both. Albeit their compositions being slightly differently portrayed:

Beneath the gold, the bitter steel 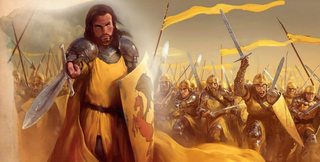 Now, the Golden Company was founded by an ex-Targaryen and Blackfyre loyalist, in Essos, called Aegor 'Bittersteel' Rivers1. This is important, given that although Bittersteel is primarily from the Targaryen family, he's actually as Westerosi as Dany is; in that he was exiled and lived much of his life in Essos.

In fact, although there are many notable Westerosi members, the majority of them are actually Essosi or Westerosi exiles, including:

Our word is good as gold

The Golden Company is renown for not having broken a contract, ever. Until now. You see although their mantra is Bittersteel's dream2, they dream of returning home, to Westeros. This will give Cersei her advantage over the Dothraki or Unsullied, in that most of the members are either bastards or exiled knights or lords from Westeros.

They'll be able to relate, look like and understand the Westerosi culture. In fact, many of them still garb themselves in Westerosi knightly fashion.

Black or red, a dragon is still a dragon

This will be interesting, if the show runners have the opportunity to delve into all of this, perhaps it could spell doom for Cersei. Given that there's a connection with Illyrio and Varys to the Golden Company:

Tyrion: How did you convince the Golden Company to take up the cause of our sweet queen when they have spent so much of their history fighting against the Targaryens?
Illyrio: Black or red, a dragon is still a dragon. When Maelys the Monstrous died upon the Stepstones, it was the end of the male line of House Blackfyre. And Daenerys will give the exiles what Bittersteel and the Blackfyres never could. She will take them home.
-A Song of Ice and Fire: Book Five - A Dance With Dragons, Chapter Five (Tyrion II).

43
What is the shape of the world of Westeros and do the Westerosi know?
5
What is the Golden Company?
37
How big of a deal is Westeros?
6
Why Daenerys isn't considered a witch by these people?
136
What do people in Westeros eat during Winter?
12
Are there any fully noble-born (and acknowledged) bastards in the Game of Thrones TV show?
10
Do we ever find out who sent the catspaw after Bran in the show?
17
Why this character is punished instead of being honoured?