In 'The Moon is a Harsh Mistress' what are Garrison didos?

In numerous locations in Heinlein's Moon he refers to Garrison orbits or Garrison didos. Based on context I've always interpreted dido as DIrect De-Orbit but having searched for a better definition I've been stymed. Anyone have an idea what a Garrison orbit is and what a dido is?

"He answered so calmly that I steadied down. "Farside approach, Man; I'm blind back there. They came in on tight Garrison didoes, skimming the peaks; I barely saw the chop-off for Luna City. The ship at J-City is the only one I can see; the other landings I conclusively infer from the ballistics shown by blip tracks."

DIDO as far as I recall stands for "Dive in Dive Out" (or as modern military term goes, terrain hugging).

Curiously enough, someone on Yahoo Answers came up with THIS (1945 article) mentioning "The Dido", which is a snugly-fitting short sleep garment (a nightie) by a Seattle designer Paula Garrison. So far there seems to be no clear correlation to RAH usage but perhaps someone with access to his papers can clarify if that was the inspiration for the name. 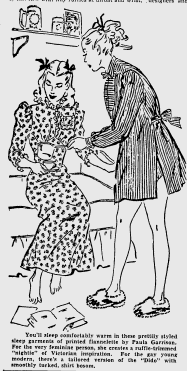 Another possible allusion (my own theory) is that the didos RAH may be referring to are semicircles (wave-like path skimming the peaks) which were named after "Dido's Problem" in geometry (referring to Virgil's Dido, Queen of Carthage):

"Find the figure bounded by a line which has the maximum area for a given perimeter". The solution is a semicircle.

I asked a WW2 pilot about it. I was told ‘Garrison flights’ were ones below and between mountains. Called “Terrain hugging” today. Concealed from radar that was new then but did exist. He thought it came from the low altitude flying. As in: right over the heads of the garrison (troops) stationed below

Not the answer you're looking for? Browse other questions tagged robert-a-heinlein the-moon-is-a-harsh-mistress or ask your own question.