Is Aemon Targaryen the only named character in Westeros who died of old age?

I was browsing, when I saw this image: 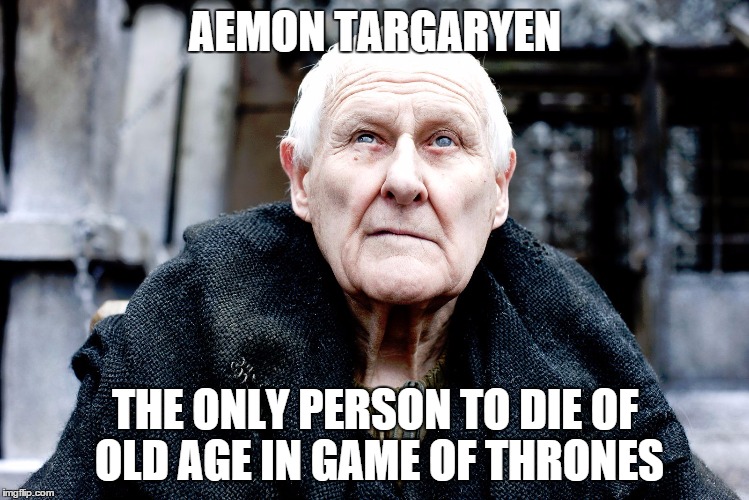 No he is not

Put bluntly, no. There is one other Major player in the time of the War of the Five Kings who dies of Natural causes, Hoster Tully. But here's a list of people that have dies of old age in a Song of Ice and Fire and a Game of Thrones.

I got my information for this from this site all the credit goes to them. They did a great job chronicling all onscreen deaths and according to them other than Aemon Targaryen, the only death of old age or due to natural causes was Hoster Tully.

All those who died in the TV show (just Hoster Tully, lol) and:

As mentioned in the comments, Hoster Tully, Lord Paramount of the Trident and Lord of Riverrun died in his bed, around 60 years old

Another ruler who die of old age is Meria Martell, who died after ruling Dorne for more than seventy years, and won the First Dornish War

38
How was the Vale of Arryn conquered during the Targaryen invasion of Westeros?
13
What is done with prisoners of war in Westeros?
17
What happened to Daenerys' khalasar?
20
How many people actually died during The War of the Five Kings?
14
Was Craster conceived or born around the time Bloodraven was at the wall?
10
How old are Danaerys's dragons?
11
Is there any official mention of the show changing the dates in the show to AL from AC?
6
Why did Aemon address his letter to “The Five Kings”?